Few reports have rocked the marketing world this year like Valleywag’s revelation in March that Facebook was in the process of slicing organic reach for brands from 16 percent down to 1 or 2 percent. But while that figure has been the talk of the town for the past three months, we haven’t had a clear picture of the impact that change has had on brands. Until now.

According to a new report from Simply Measured, the total engagement for the top 10 most-followed brands on Facebook has declined 40 percent year-over-year—even as brands have increased the amount of content they’re posting by 20.1 percent.

Here are the results broken down for a number of top brands on the network. Someone at Facebook ought to buy Audi’s head of social media a drink. 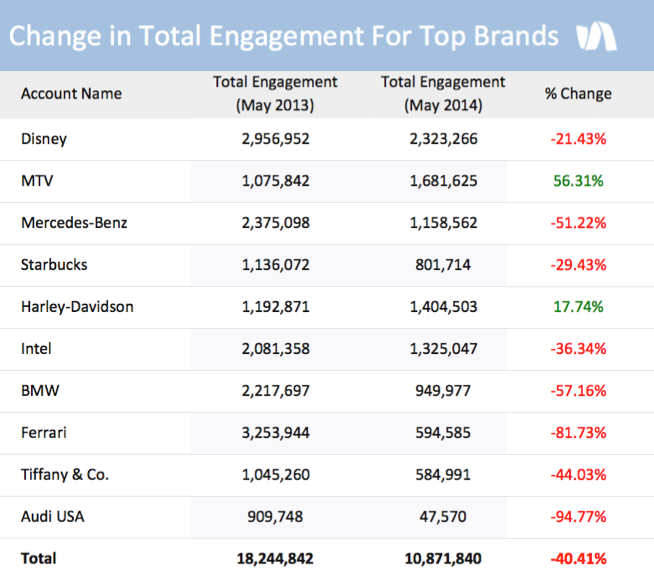 Since brands are posting more but generating less engagement, per-post engagement has actually decreased by an even greater degree—50.4 percent. 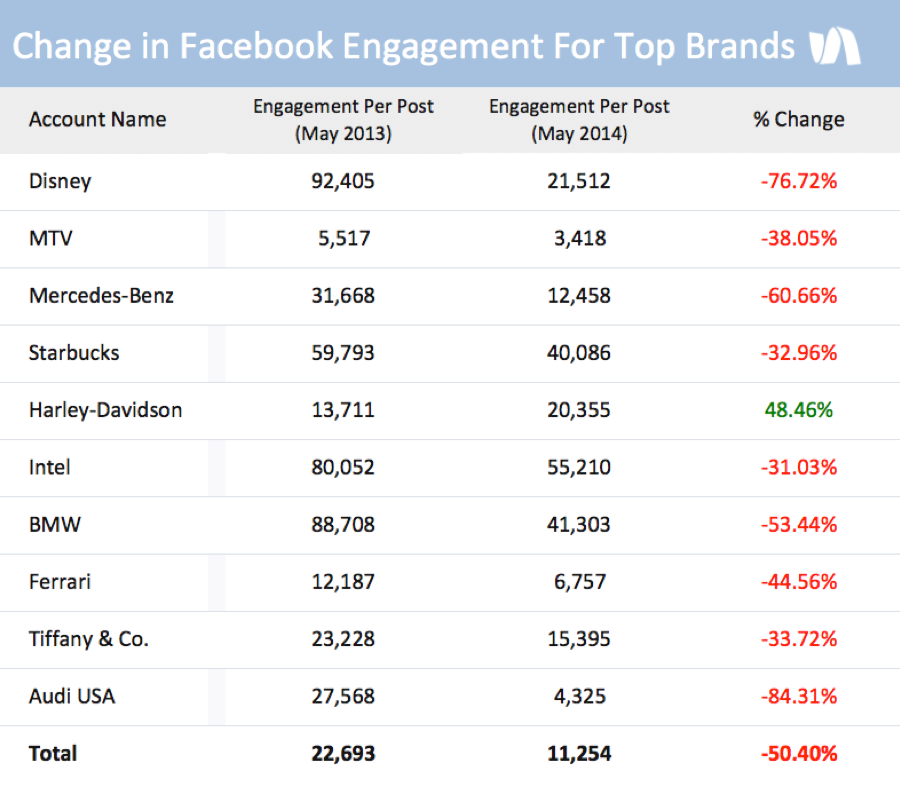 These numbers are even more striking when you consider engagement is significantly down even though brands are almost certainly spending more money to promote their posts to combat plummeting organic reach. Facebook’s ad revenue reached $2.27 billion in Q1 2014, up 82 percent from Q1 2013.

For brands on Facebook, these are dark days. They can choose to spend more money to reach fans they had already accumulated in the past, but Facebook will likely decrease branded reach even further.

This prediction should scare not only brands, but also publishers like Mashable, BuzzFeed, and Upworthy that depend significantly on referral traffic from Facebook. Ultimately, publishers very well may experience the same fate, an idea an idea echoed in this cutting analysis of Facebook by Contently’s Sam Slaughter:

One metaphor I like in working with Facebook is like the famous f**k you, pay me scene in the movie Goodfellas. Publishers are all getting fat off the benefits of free Facebook traffic for now, but when Facebook decides it wants to start charging (and it will), they’d better be ready to pay up.

The bottom line? Build an audience that secretly belongs to a social media mob at your own peril, and don’t be surprised when the brands and publishers that own their audiences are the only ones that survive.