Lessons From the Most Popular Phrases in Viral Headlines

If you’ve so much as glanced at the Internet in the last year, you probably won’t be surprised by what Buffer’s Kevan Lee found after analyzing 3,016 headlines from 24 top content sites such as BuzzFeed, ViralNova, and Upworthy. While some of the single words and two-word phrases that came up most often are notable—such as the fact that “you” or “your” were found in 16 percent of the headlines—things get really interesting when you examine the most popular three-word phrases. 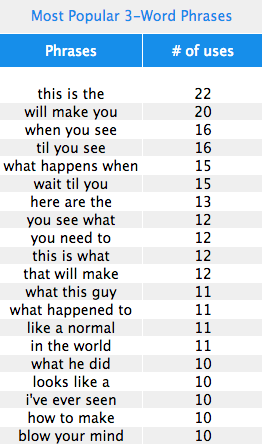 “This is the,” “will make you,” “when you see, “til you see,” and “what happens when” were the four most common phrases found. Are you nodding right now? Then you weren’t surprised to see that “in the world,” “I’ve ever seen,” and “blow your mind” are on the list too.

But as Lee points out in his analysis, there’s a logic to the madness. The prevalence of “you” and “your” in headlines, for example, provides valuable insight for content creators.

“What does this say about viral headlines?” he asks of the second-person phenomenon. “They seek to add value for you, the reader. Make content about the reader, not about the writer.”

Likewise, the anticipatory and questioning nature of the common three-word phrases piques readers’ interest, especially when they add up to the question of “why.”

“Finding out ‘why’ is satisfying to us because of a phenomenon called the curiosity gap,” Lee writes. “This gap creates something like an itch in your brain, and it can only be ‘scratched’ by learning more (and thus, clicking on the post).”

Marketing analysis app maker Ripenn, whose headline data made up the bulk of Lee’s research, found broader patterns among the 2,616 headlines they collected. Current event and celebrity name-dropping (especially Beyoncé’s name, of course) dominate headlines, as well as calls to action and words that tap into readers’ emotions.

Therein lie some great tips for headline writers today, but the larger question is just how long these tricks will last. As the founder of Ripenn, Josh Sturgeon, writes, the line between helpful takeaway and deception is thin.

“I’m not advocating for the dark arts of clickbaiting,” Sturgeon says. “Marketers, especially those in a B2B space, have to deliver the goods after bringing a visitor to their site. But there is a lot we can learn from writers who have built multimillion-dollar media companies by writing clever titles.”

In other words: Only be clever if you’re also being honest. But even so, what happens to the appeal of “you’ll never believe what happened next” once readers are too worn out by the phrase to care?

What will happen next isn’t so unbelievable: Content creators will think of new provocative phrases to totally wear out. In fact, Upworthy has been testing out new strategies for a couple months now.

The pursuit of attention grabbing headlines has been a developing art since the dawn of the written word. “You’ll never believe what Beyoncé did that will blow your mind” may not work for much longer, but if you examine why that headline construction works, you’ll find a way to create great headlines forever.

After all, getting readers’ attention with a provocative question or curiosity piquing phrase is evergreen advice, provided the content can live up to the hype.