For every 100 people who love your brand’s content, without fail one sourpuss will have something negative to say. And no matter how hard you try to make everyone happy, you won’t be able to stymie those haters.

It’s a common scenario that typically plays out as follows:

1. Embrace the fact that consumers are in charge

Content creation is the Pandora’s Box of the marketing world. Regardless of what your brand publishes, people may take jabs.

That vulnerability is out of your control. But you can accept that, like it or not, consumers are in charge of defining your company’s influence. Maintain a sense of emotional maturity, and don’t let the virtual punches escalate into a media scandal.

“Brands need to realize that social has created a two-way conversation,” says Suzanne Baran, a content strategist who works on branding campaigns with Fortune 500 companies.

Readers are savvy about that two-way conversation, and they’re not new to the world of online comments. They can tell when someone is unfairly trolling a piece of quality content, and when they’re making a valid point. Either way, if you believe in the quality of your content, trust that it will stand up to the criticism.

“Social comments should remain live,” adds Baran. “It shows character when a company doesn’t rush to delete a comment and instead, addresses it head on.”

Address a comment head on, and you might find someone invested in your brand—like the response to this article from Dell’s Tech Page One magazine:

2. Bring them to your side

Competition for consumer eyeballs is incredibly fierce online. Audiences bombarded with marketing messages have to constantly choose what deserves their attention.

And then there’s “SideThorn,” who cared enough to reach out and offer his feedback. It may sound counterintuitive, but “this sucks” can actually be a sign your marketing is working.

“A Negative Nelly or Dougie Downer sees this an opportunity to get attention, or they generally had an unpleasant experience and want to know that they have been heard,” Baran says. “This complainer obviously has some sense of loyalty, so show them that you care.”

Let’s revisit the Dell example from above. Rather than spark a backlash, the negative comment sparked a healthy debate about the content from the article. It brought respondents out of the woodwork that were pleasant, genuinely interested, and engaged within the content. 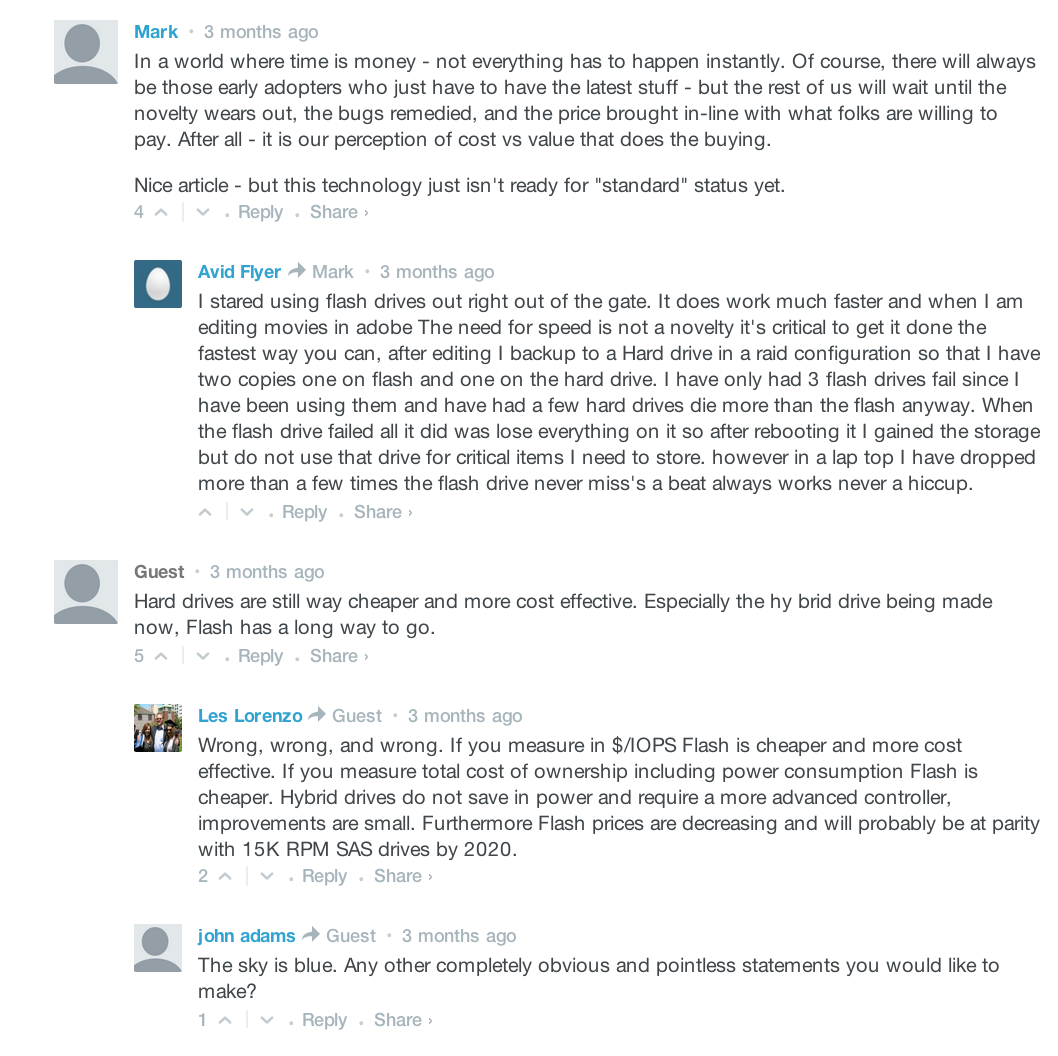 Let the conversation flourish, and some commenters may even gravitate back to your your side organically.

Take a negative situation and turn it positive. A negative comment can inspire an entirely new conversation thread—especially if “SideThorn” isn’t a troll, but someone who genuinely cares.

“Feature the commenter in a new blog post,” recommends David Murdico, managing partner at Supercool Creative, a PR and social marketing firm that works with Pizza Hut, IBM, and T-Mobile.

Here is a recent example from FreshBooks, a cloud accounting platform that recently published an article about the Affordable Care Act. Here, the writer (me) encourages an angry commenter to elaborate upon his perspective—even in a new blog post: 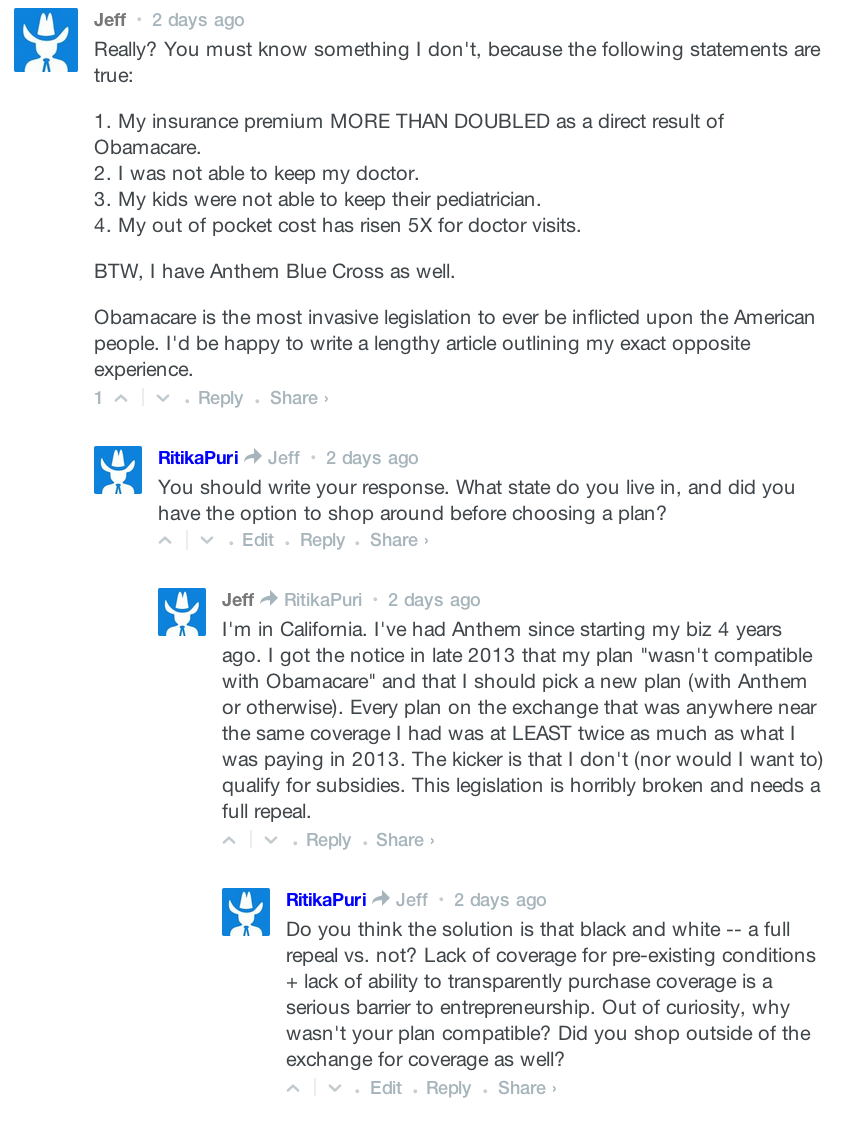 Don’t bury an angry comment or extinguish a heated debate. Keep the conversation going, and own it. Facilitating a debate about criticism on your site is much better than wondering why nobody is talking about you at all.

“Be sure to let the commenter know about the new post so they can leave a new comment,” Murdico says.

Don’t worry about responding to every comment; spirited communities will self-direct their own conversations.

“Companies that have built vibrant online communities will often find that engaged advocates will respond to negative comments on the brand’s behalf,” explains Keva Silversmith, director of public relations at Starmark International. “These advocates will be a powerful, independent voice.”

Take a lesson from The Next Web, a tech-focused publisher that works with brands to publish sponsored content. A recent article about responsive design vs. native mobile apps generated a debate about whether or not the piece was outdated. The author stayed out of the conversation, which ultimately evolved into a healthy, tactful debate: 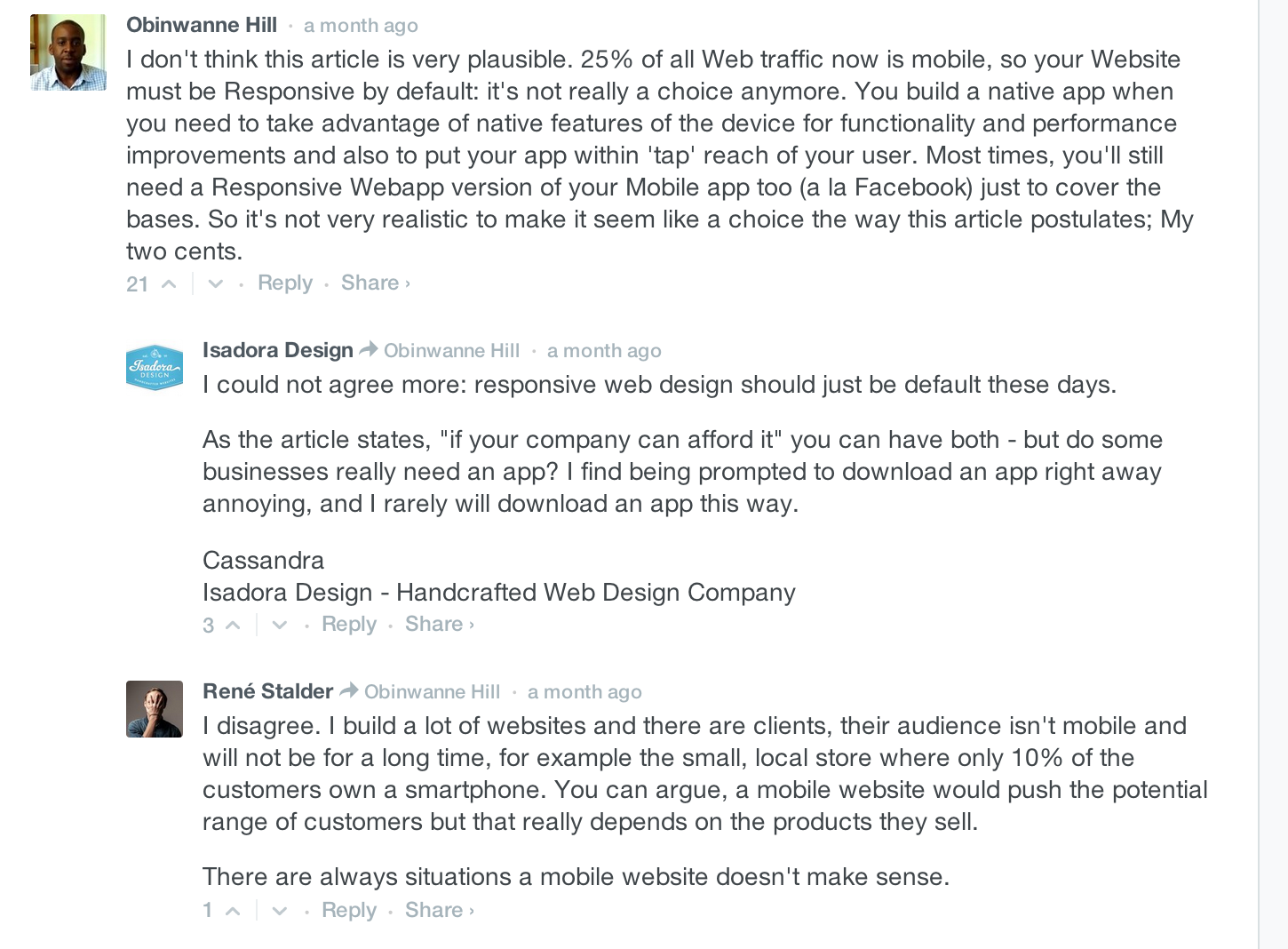 Consumers don’t want a biased forum; they want to be able to express themselves authentically. The best PR strategy for brands is to respect these wishes.

“When a brand does decide to respond, the message needs to be friendly and non-confrontational,” Silversmith says. “Express a commitment to work with the poster towards the best solution.”

Final thoughts: Don’t beat yourself up

It’s okay to be wrong sometimes. It’s also fine to laugh at yourself. Brands aren’t always perfect, but those who successfully navigate controversy know when to take the heat out of the situation.

“Joke around with the angry commenter,” says Murdico. “See what reaction you get. Make the comment feed entertaining for your readers in the process.”

Don’t take yourself too seriously, and you’ll be fine. We’ll all make it through, “SideThorn” included.