The battle for human rights won’t lead to any medals in Sochi, but as we’ve already discovered, this year’s Olympic-themed content isn’t only about athletics.

The Russian government’s anti-LGBT laws and statements on homosexuality probably wouldn’t upset the rest of the world in 1914, but this century, brands and creatives have confronted a sensitive political topic with a stockpile of Sochi-inspired pro-LGBT content, from bold, straightforward blog posts to inclusive ads.

In our opinion, the following brands and creatives have produced the most timely, funny, thought-provoking and inventive responses to Russia’s prejudiced stance:

Filmmakers such as Perez Bros. and Michael Rohrbaugh created Olympic-themed PSAs with Russia’s anti-homosexual policies set in their satirical crosshairs. In the Perez Bros. piece, a boxer weigh-in parody turns into a make-out session. Rohrbaugh’s video, made for the Fair Games Project, painfully illustrates its satiric title, “Russia Declares Discrimination Newest Olympic Sport.” The short, cinematic videos were picked up by Gay.com and Upworthy, respectively.

It’s always nice to be reminded our online overload can be a benevolent dictator. At least when it comes to LGBT rights, anyway. Google marked opening day of the Olympics by honoring gay athletes with a rainbow-colored Google Doodle and the following excerpt from the Olympic Charter.

“The practice of sport is a human right. Every individual must have the possibility of practicing sport, without discrimination of any kind and in the Olympic spirit, which requires mutual understanding with a spirit of friendship, solidarity and fair play.”

Good for you, Google, owner of our souls. 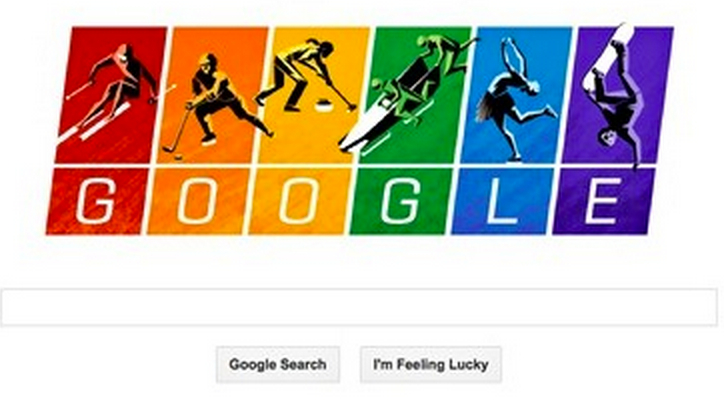 The Canadian Institute of Diversity and Inclusion

Try and watch this 32-second video without letting out a triumphant giggle. Who better to point out that winter sports like luge “have always been a little gay” than Canadians, the world’s undisputed snow sports aficionados? More than 4.5 million giggles to date have validated The Canadian Institute of Diversity and Inclusion’s authority on the matter.

Sometimes you can say so much with only a few words. On February 7, the yogurt-maker and sponsor of the United States Olympic Committee and Team USA posted a simple Twitter picture of a rainbow-colored stack of Chobani cups with the inclusive tagline, “Naturally Powering Everyone.” With more than 7,000 combined retweets and favorites, “everyone” seemed to approve. 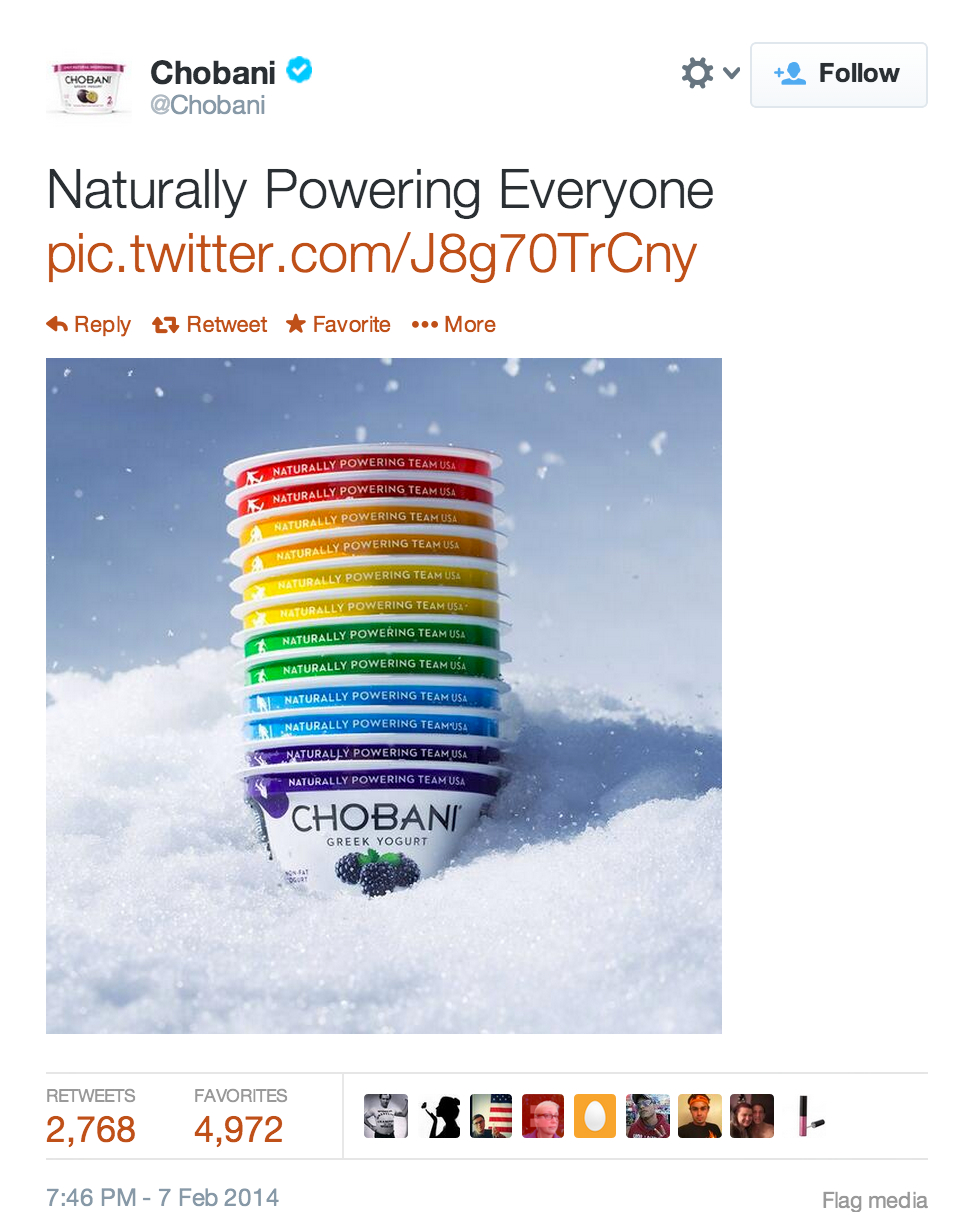 All this pro-LGBT Olympic content may be fun and good-natured, but the reality of homophobic violence in Russia isn’t funny at all. The Human Rights Watch released a graphic four-and-a-half-minute video documenting the violence. It’s very difficult to sit through, yet nearly 3 million viewers have watched it anyway. The video’s popularity highlights the idea that ending discrimination based on sexual orientation goes well beyond the support of Olympic athletes.

We can always count on Saturday Night Live to point out the hilariously obvious. In the show’s cold open on January 25, SNL imagined a gay-free Sochi Olympics. It’s not very Olympic-y.

Sorry, Putin. You wanted the Olympics, you’re getting the Olympics, in all of its heroic, bold, inclusive, warm-fuzzy glory. The brands have spoken. Equality for the gold. 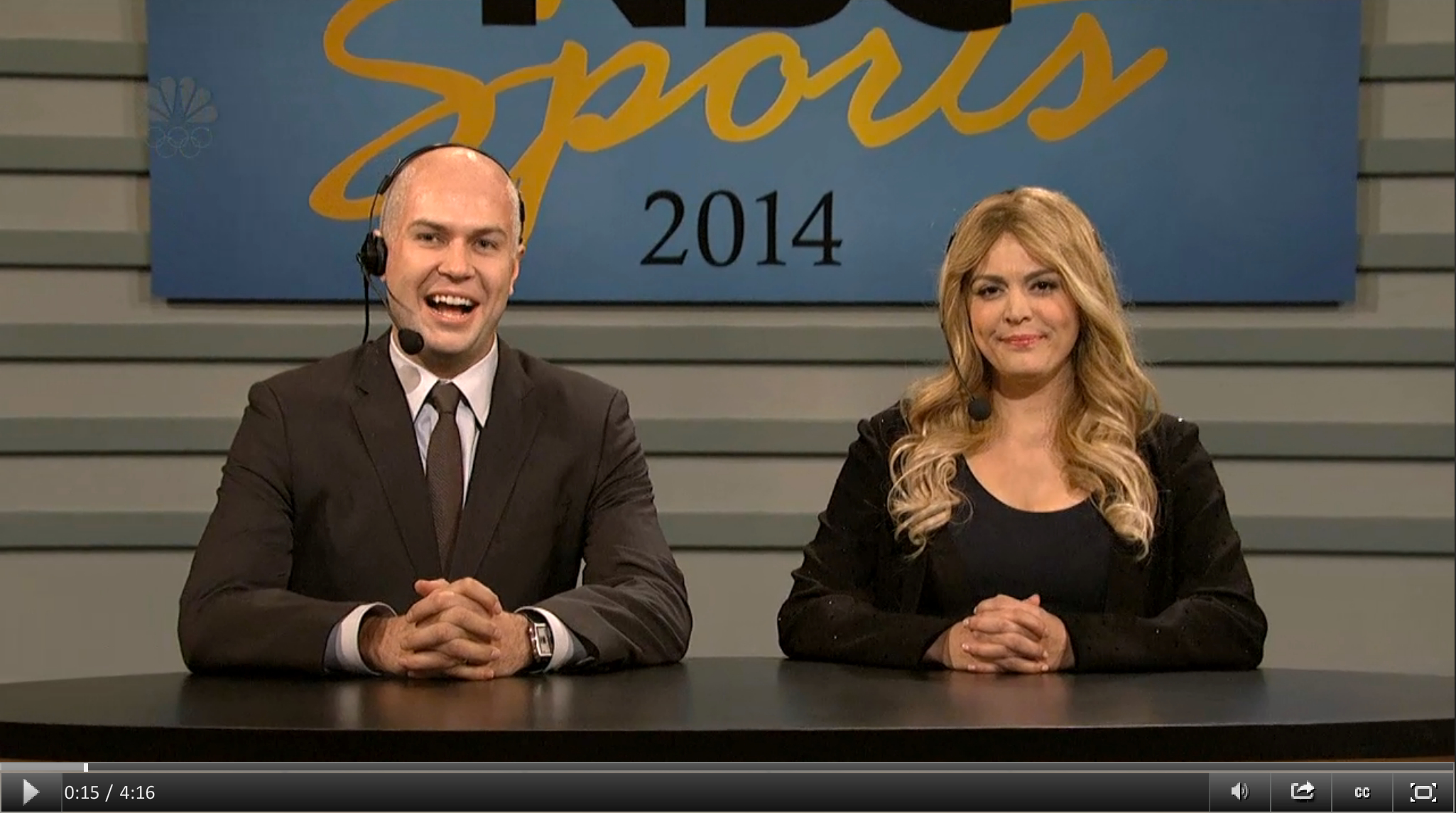