Video is expensive. Producing a clip that looks professional enough to compete on TV and YouTube regularly runs brands millions of dollars once you account for talent, equipment, and distribution fees.

But on a small scale, live-streaming on an app like Periscope (which is owned by Twitter) has changed that reality. Content creators can let users tune in to feeds for live events and insider exclusives without sacrificing half a marketing budget and two interns to be named later.

Periscope has only been around for a year, and according to VentureBeat, it’s already hosted 200 million streams. While the technology will probably never compete with established digital platforms like Netflix and YouTube, live streams do seem to have a potential niche in today’s marketing ecosystem.

Here are 10 companies that have managed to use Periscope (somewhat) intelligently in the last year.

While millions tune in to the Academy Awards every year, most never get to walk the red carpet. So Kohl’s brought everyone closer to the action by live-streaming the award show—without stopping the cameras during normal commercial breaks. Finally, we got to see what celebs do while us plebeians are subjected to Aflac commercials.

To give viewers more of an insider’s perspective, the brand also partnered with comedian Vanessa Bayer to broadcast her afterparty. For more active engagement, Kohl’s even encouraged users to share their own thank-you speeches.

But Kohl’s, if you’re listening, one note: Featuring the speech from someone who said she’s thankful for Kohl’s is pushing it.

We just read a thank you from Lori S. Thank someone special w/ #AllTheGoodStuff & @VanessaBayer may read it LIVE! pic.twitter.com/OgiBVwqTxw

Regardless, the brand deserves some applause—using Periscope to grab an audience away from the commercial breaks of an awards show is a creative strategy.

GoPro and Periscope partnered up to live-stream the Winter X Games. Finally, I can feel like I’m snowboarding down a double black diamond without ever having to train… or put on a coat .. or leave the house.

As you can see from the schedule GoPro posted on its website, the feed featured exclusive interviews with X Games athletes, a guide to using Periscope with your GoPro, and first looks at the GoPro photo exhibit—a good example of the appeal sports can have on a live-streaming platform.

In honor of the new Doritos Collisions chips, BBDO Periscoped 12 full hours of things colliding into each other. In slow motion. And let the public vote on the action. Naturally, a laptop smashed into a watermelon, and some roller skates flew into a milkshake. If you’re smoking something other than cigarettes, this is even better. And, let’s be honest, if you’re eating Doritos Collisions, you probably are. Way to know your audience, Doritos.

Last year, Spotify rewarded its followers by airing a private concert with the lead singer of Villagers. Although the engagement was modest—382 viewers and 1,534 hearts, per Adweek—offering behind-the-scenes footage is a smart way to make fans feel intimately connected to their favorite artists, especially if they can’t make a concert in person or can’t afford tickets to an intimate event. 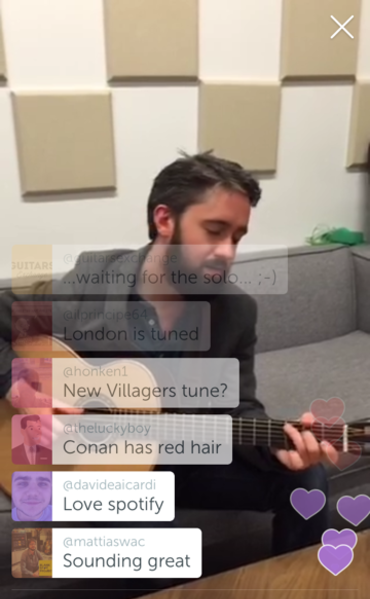 Of course, Red Bull, the champion of innovative advertising, made the list. The energy drink company used Periscope to live-stream its party at the Red Bull Guest House during Miami Music Week last March, capitalizing on the ultimate social media currency: fear of missing out. In other words, the brand got plenty of people to hang out with Lil Wayne regardless of how far away they were from Florida. 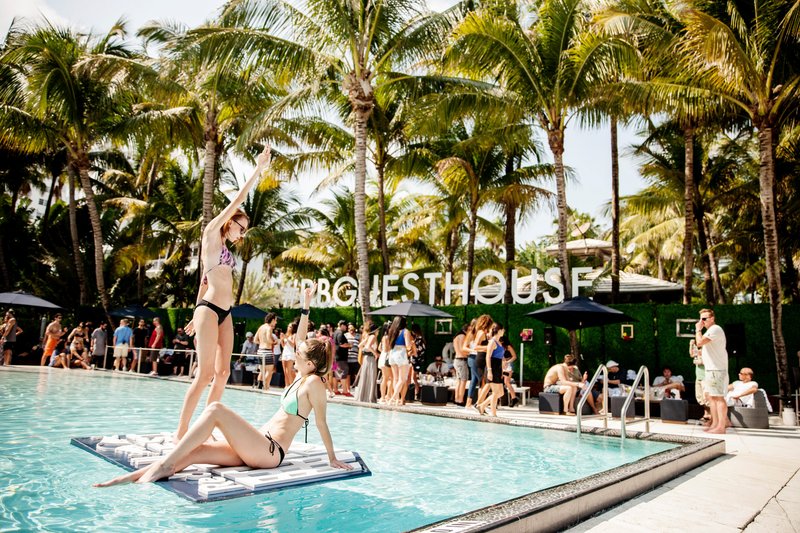 Fashion is another industry that pairs nicely with Periscope. Retail brands like Marc Jacobs, Urban Outfitters, and Puma have all shown off new clothes using live streams. But DKNY may have been the first major fashion company to try out the platform, opening its virtual closet doors to fans moments after creating a Twitter account for the short-lived DKNY PR Girl. Think of it as a fashion show for the 21st century.

To expand its social reach, Benefit Beauty handed over its Periscope account to makeup artist Maggie Ford Danielson, who answered user questions like “What’s the best primer for ultra dry skin?” in real time. For everyone who uses beauty products, it’s always great to have a professional alternative to Dermatologist Google. 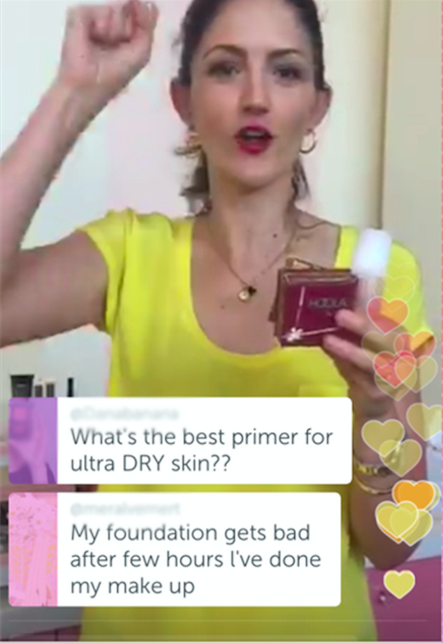 It’s a huge deal to some people when a beloved celebrity gets married. VH1, which usually teams up with people who aren’t really that famous, decided to tap into that interest by Periscoping the wedding of two Love & Hip Hop cast members. Hey, these people are already on a TV show—why not give fans a little extra and broadcast some complementary footage live?

People love feeling like they’re very important, and the easiest way for brands to make them feel that way is by offering an exclusive experience. To hit its target audience, Nissan took advantage of live video by Periscoping the unveiling of the 2016 Maxima at the New York Auto Show.

Not only did the event help convey Nissan’s loyalty to its fans, but the live stream also let a wider audience take part in the premiere.

Yes, even the suits at the New York Stock Exchange use Periscope. To celebrate the opening of the stock exchange a few weeks ago, the organization streamed the ringing of the bell on the trading floor. This looks like the work of an eager social media intern, but considering celebrities and public figures often ring the bell, it’s a relatively simple move for the NYSE to build some buzz for its daily traditional. Now if only that could help Twitter’s stock price.