The Internet is full of manipulation, passive-aggressive pleas, and FOMO. We usually expect these unhealthy behaviors from individuals who take social media too far. But even though some of today’s biggest publishers have more credibility than someone trolling on Twitter, they have more in common than you might think.

Take Esquire, for example—which promises to show you its “Ultimate Sex Guide” if you hand over your email address and subscribe to its newsletter. Maybe you’re excited for the guide. Then again, maybe you’re not, so you try to get rid of the capture box. To do that, however, you have to click on a passive-aggressive opt-out link that solicits your email one last time in exchange for knowledge about the Tantric Yab-Yum position. 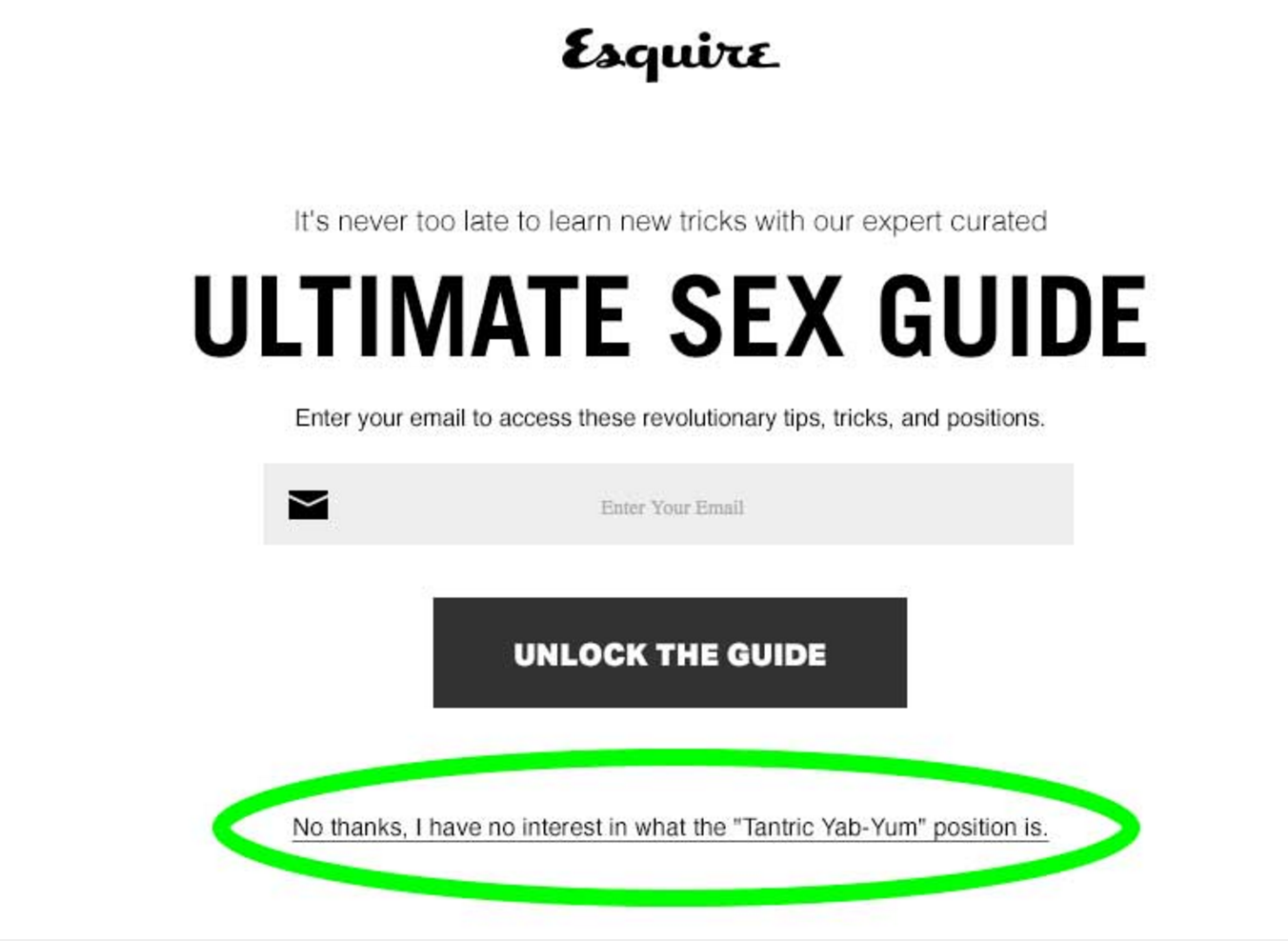 It might be tempting, if you’re into that type of thing. But it’s also fairly manipulative.

Lydia Laurenson, a media strategist for News Deeply, a media company that makes user-centered resources about global issues, decided to start keeping track of all these forms she came across. So she made a Tumblr, aptly titled Cruelest Opt-Outs, which is dedicated to pop-ups like these that have particularly irresistible, cunning, or devious exit links.

I recently got on the phone with Lydia to talk about passive-aggressive opt-out forms, email marketing trickery, and the future of branded newsletters.

What inspired you to make Cruelest Opt-Outs?

I really care about getting good information, good research, and good user experiences out into the world. And I think what’s fascinating about passive-aggressive opt-out forms is that they can get people to do what you want, but it’s not sustainable. A lot of people who are clicking Yes on these things don’t realize what they’re signing up for.

It’s not all bad, especially if people know what they’re getting into. As long as somebody knows what that page is doing, I don’t have a problem with showing them a weird passive-aggressive form.

So are you putting these images of opt-out forms on your Tumblr because they’re effective or to criticize them because they’re trying to guilt consumers into staying on?

There’s an interesting set of moral questions around these opt-out forms because they tend to elicit really strong emotional reactions. Some of them are funny, but some of them are also really manipulative.

I don’t personally have a strong judgement about using these forms. I think a lot of them are funny. But when you show them to an unfamiliar audience, it can be like that Nigerian scam. Someone in their twenties or thirties isn’t going to have a problem seeing through it, but some people will spend their entire retirement savings. Just because someone isn’t digitally savvy doesn’t mean they should get scammed.

And sometimes opt-out forms are an unpleasant user experience. Sometimes they’re annoying, or gross and manipulative. Especially those that say, “No, I don’t care about X.” There was one for Men’s Health that was particularly bad. 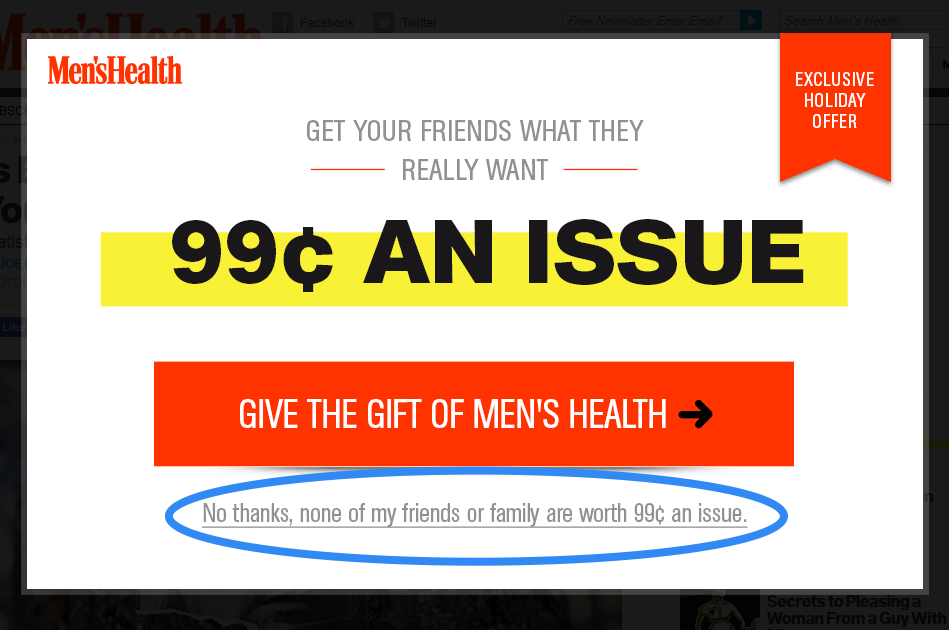 I don’t judge them from best to worst. I judge them on how they make me laugh. Probably my favorite is “No thanks, I hate creativity!” from freelancer Paul Jarvis’s website. That one strikes me because I’m a creative person and I often do creative work. 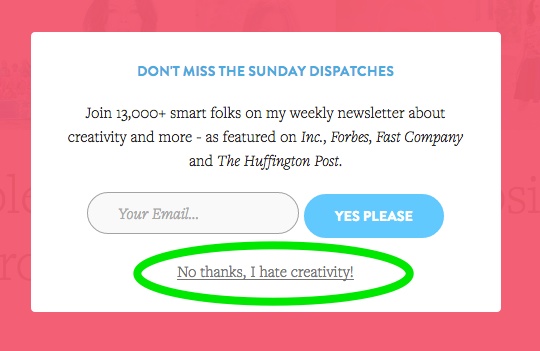 You look at a lot of opt-out forms. Does that mean you read a lot of email newsletters?

I do subscribe to a lot of email newsletters, but I very rarely find my Tumblr images through them. They must be effective at getting signups, but I wonder how effective they are compared to forms that actually tell you what you’re signing up for. My guess is that you can get more signups using those manipulative forms, but the quality of readers is lower than you’d get by using a more transparent form.

For example, when I work on a newsletter signup form, I say, “Okay, somewhere in the text there is going to be a description of what is going to happen when someone puts their email address here. Like, ‘Please sign up for my newsletter. You will receive X, Y, and Z.’ It doesn’t have to be that straightforward, but it should include that information. If readers don’t know what they’re getting, it’s not to your advantage.

In all of the tests I’ve run in other domains, like email headlines, I’ve found that you might get more clicks with a scandalous headline, but if that headline doesn’t correspond with what’s actually in the email, then people aren’t going to respond to your call-to-action and the rest of your efforts are going to suck.

Do you think email newsletters will change in the future?

Ideally in the future, more people will understand that media producers need to make real, positive content that contributes something valuable to their readers’ lives. That’s the only key to success, and there’s no shortcut.

What is your advice to fellow media producers?

I really believe that quality media does get noticed. It may not rise to the top like cat pictures, but it gets noticed and makes a difference in people’s lives. And in terms of branded media, quality is the only key to success.

This interview has been lightly edited and condensed.