Get ready, we’re about to talk about division and addition. No, we’re not going back to 4th grade math—we’re discussing two crucial tactics in the content marketing industry: divisible and additive content.

Divisible content: Usually a longer, more in-depth piece of content that can be chopped into smaller sections capable of standing on their own. Think of a white paper or e-book with individual sections that are each released as separate articles. 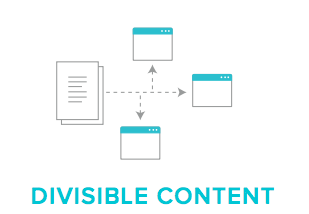 Additive content: The opposite of divisible content, when smaller pieces can be combined into a larger project.

Because I’m a child of the ’90s, I like to use the Power Rangers to think of both concepts. Separately, the Power Rangers have their own Zords with unique abilities that give them an advantage when fighting their enemies…

… but they can also come together to form a Megazord, an awesome fighting robot, when necessary.

Similarly, content can be divided or added together for maximum efficacy. If you have a 6,500-word e-book, like the one I recently wrote about Facebook, you shouldn’t just release that piece of content and let it sit. Some people may not be interested in tackling such a long piece of content, so chopping up your story gives it more utility.

To give you an idea of what divisible content looks like, we recently sliced up that e-book into four articles, each about 1,500 words. “How to Use Facebook’s Best Feature: Targeting,” for example, stitched together two separate sections of the original text. It took me less than an hour to set up that story, which is now driving traffic while also generating downloads for the e-book, thanks to the call-to-action button at the bottom of the page.

We also could have approached this the opposite way. I could’ve written a few articles about Facebook’s features, figured out which ones were most popular, and then mashed them together into an e-book. Similar to the divisible example, I could create a new, powerful marketing asset without putting in a ton of effort or time.

Creating multipurpose content is something the literary world and media industry do all the time. Think of short-story collections that include previously published stories, or year-end roundups like this popular compilation of New York Times stories with the most attention minutes.

Media and literary companies are fond of additive and divisible content for obvious reasons: It’s cheap and efficient, and it’s easy to side-step the few downsides. The biggest risk is that your work will become repetitive, but you can avoid that issue by mixing up where you distribute and how you package the stories. Another hurdle is that not everything you produce can be repurposed. But there are ways around that as well. For example, even though you can’t really reduce infographics into substantial pieces, a smaller image from the infographic or a statistic may work well as a tweet.

One of the biggest advantages, however—and this goes double for content marketing operations in particular—is that additive and divisible content remove the headache of going through the compliance process all over again.

And for companies just beginning to publish, putting together old assets to create new content is an easy way to build up a publication. This process can happen organically, but if you’re pressed for time and budget, brainstorming versatile projects from the beginning will make your life much easier.

If your strategy doesn’t already include additive and divisible content, it’s probably time to be like the Power Rangers and get morphing.