How to Choose Between the Many Ways to Advertise on Facebook

One of the stranger things about Facebook is its dual nature of being both social network feed and advertising machine. For most people, Facebook is a place to connect with friends and family, read news, and organize events. For marketers, though, it’s a treasure trove of data and highly targeted advertising opportunities—sometimes it’s even a publishing platform.

For many marketers, particularly content marketers, Facebook is an excellent place to boost your latest article to bring in traffic. That’s what we do here at Contently, and it works quite well.

But for a lot of marketers, Facebook is more of an old-fashioned advertising platform meant for videos, in-feed ads, and right-rail ads with more traditional CTAs and KPIs. You post some sort of ad creative, target an audience, and put money behind it to get it seen, much like a standard display ad.

“We’ve had to change the thought process of our publishing,” said Adam Lasky, head of North America marketing at Spreadshirt. “Overtly promotional posts exist as ads, while engaging content exists as timeline posts. But Facebook is really now just another advertising platform.”

If you want to promote a piece of content, post and promote it. You want it to fit naturally within the context of a user’s News Feed. To serve more traditional display ads, use an in-feed or right-rail ad.

Deacon Webster, CCO at digital agency Walrus, believes that whether you use ads or posts depends largely on your brand and product. “If I’m Pampers or a dental floss company, something like that, there’s only so much out there that I can really talk about,” he said. “Then it starts becoming weird manufactured things. Ninety percent of people don’t have enough to say to be talking about it on a regular basis unless they’re a magazine. They’re going to have to do something that’s more ad-like.”

Whether you publish posts or ads, know that either can work. Ultimately, though, a combination of the two is probably the sweet spot.

“I think both are good. Both together are best,” Randy Parker, founder of Facebook marketing tech company PagePart, said. “You’re going to need to run things that are more traditional offers, right? But at the same time, the best kind of thing you could do is make your page stand out—write about things that create value for your customer.”

What format should I choose?

There are many different ways to post a piece of content on Facebook. We already discussed ads versus posts. But what about images versus video? Or in-feed versus right rail? Or even desktop versus mobile? These are all important considerations:

For images versus video, there’s a clear winner: video. Native video on Facebook has exploded in the past year, with views and engagement skyrocketing to (somewhat controversial) numbers no brand could resist.

Webster said his company can’t put out enough videos on Facebook. “Our engagement rates on a … good static image post are, let’s say, three or four percent. On a video post, it’s like nine to twelve,” he said. “We’re doubling and tripling engagement on posts just by being videos. If we do good ones, which we like to think we do, you can see the video completes, [and] we get ninety percent of our views watching the whole thing.”

Of course, not every brand has the kind of budget to do video—or, at least, do it right. That’s something Parker stresses when talking to smaller brands or marketing departments.

“Video is expensive,” he said. “They can run up a budget fast.”

Ford’s amazing Facebook campaign from 2014 makes this clear. The company ran a mobile video ad campaign targeting a Latino audience and saw massively successful results, reaching 27 percent of all U.S. Hispanics over 18. The CTR was 6x that of rival car campaigns in the same time period, and the videos saw a 71 percent completion rate. Needless to say, if your brand can produce quality video, there’s no reason to wait another second. 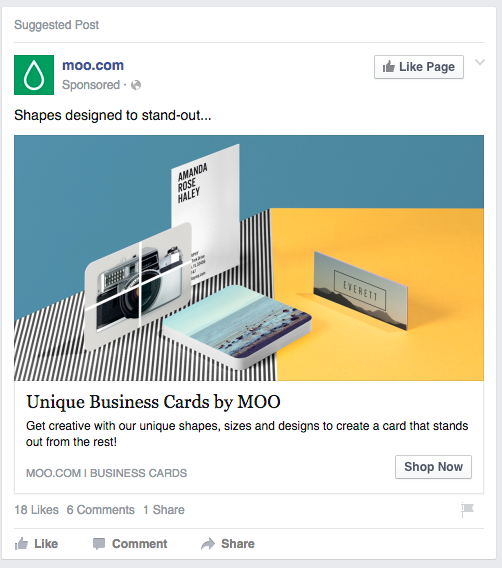 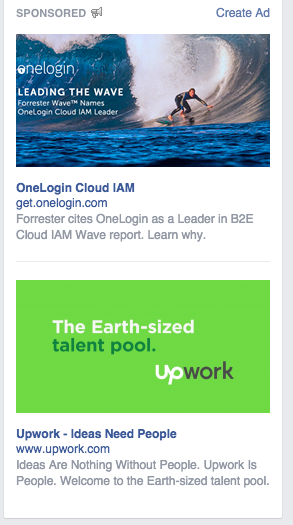 In-feed ads look like standard posts but are slightly offset from normal updates with a small “Suggested Post” disclaimer in the top left. They show up in the News Feed as you scroll, and once you scroll past them, you’ll probably never see them again.

Right-rail ads, on the other hand, scroll with the News Feed, though their placement makes them easy to ignore. Only ads appear there, so most people have probably trained their eyes to ignore that section of the site entirely. Facebook revamped these ads last year in order to make them fit in better with the rest of the News Feed while decreasing their frequency, which caused ad rates to jump considerably.

For Contently’s internal publications, CPCs are generally much lower on right-rail ads than in-feed ads, though dollar amounts will vary widely depending on the brand and campaign. (Reports from social media analytics companies like Nanigans confirm that in-feed ads routinely see better ROI.) Adam Lasky also points out that controversial ads, such as for political campaigns or any sort of hot-button issue, are best suited for the right rail.

“We ran an in-feed ad for U.S. presidential candidates and targeted based on political affiliation, which got a decent amount of complaints from people who saw the ad but were not initially targeted,” he said. “In the future, we’ll leave the controversial stuff on the right rail.”

Parker believes that both the right rail and the News Feed are key places for retargeting ads. “The in-feed will be a great space to be getting a feed of the things that you are going to maybe engage with, and then the right rail has a lot of spaces that catch my eye.”

The big problem with the right rail is that ads don’t show up on mobile. Considering that about 40 percent of monthly Facebook users access the social network solely on mobile devices, that’s a problem.

The big decision to make when it comes to posting or advertising on Facebook is: Do you want to publish on mobile or desktop?

For most brands, mobile is the place to be. It’s where the majority of Facebook users access the social network, and it’s the future of the platform. Facebook’s unrelenting focus on optimizing its mobile app (and subsequently ignoring its desktop site) demonstrates the company’s commitment to pushing along the user exodus to mobile browsing.

If you don’t choose either option while setting up a campaign, Facebook generally defaults to a mobile-heavy mix, usually because the CPM tends to be more efficient, as this Salesforce report makes clear. Still, not every brand should focus on mobile—namely, any business that doesn’t have a mobile-optimized website.

“A big thing that a lot of companies big and small forget is don’t buy mobile ads if you don’t have a mobile page,” Parker said. “That’s just a way to waste money. If you run an ad while I’m already doing something else, and the ad entices me and I click on it, and I get some page that looks like crap, I’m out of there.”

If you’re not optimized for mobile, though, make that a top priority. Google already punishes non-mobile websites, and just about every Internet company has been preparing for the mobile migration for years.

Another important thing to keep in mind? Length. Despite its lack of restrictions on post length, Facebook users like posts that are pithy. About 40 characters, to be exact, according to a study by SumAll and Buffer. That’s a good rule to follow for social media in general: Keep it short, sweet, and to the point.

This is an excerpt from “The Marketer’s Guide to Facebook.”