Contently Case Stories is a series highlighting some of Contently’s most successful clients.

Crickets may be pleasant on a warm summer night, but they’re a nightmare if you hear them after you tell someone a story.

Unfortunately, when financial services companies start creating content to boost their marketing, the dreaded sound of crickets are all too familiar. However, for Aberdeen Asset Management, an investment management firm based out of the U.K., trying to get a response from an audience on social media became a crucial turning point in its content marketing efforts.

“That was the trigger for us to become more organized,” said James Whiteman, Aberdeen’s head of investment communications. “You need a big, monstrous content strategy to [be heard].”

A method to the madness

Thinking Aloud, Aberdeen’s blog launched in partnership with Contently last year, offers commentary on financial events and investment strategies through a wide variety of articles and videos. There’s also a strong mixture of newsworthy analysis and evergreen advice. For example, this week, “Chinese Circuit Breakers” gave readers a timely look at the impact of falling stock prices in China, but the site’s most popular story, published in October, include short animated videos that explain “The Seven Deadly Sins of Multi-Asset Investing.”

The company ultimately decided to create their own media hub from scratch after trying (and failing) to be heard on social media. Aberdeen realized it was nearly impossible to compete without a cohesive content strategy.

Thinking Aloud has set up three categories to cover its most important pillars in more detail. The Bigger Picture focuses on world news from an investment perspective, Investment Clarity discusses macroeconomic trends, and Culture and Inspiration balances out the investment-heavy information by delving into broader anthropological issues that show off the softer side of the brand’s personality.

Aberdeen consistently differentiates itself from other financial content marketing by taking on unique angles that demonstrate its storytelling capabilities. Topics on the three sub-sections range from the “The Ten Golden Rules of Equity Investing” to a culture piece that uses study data to compare how the effect of classical music on the brain is similar to how the brain analyzes the stock market. 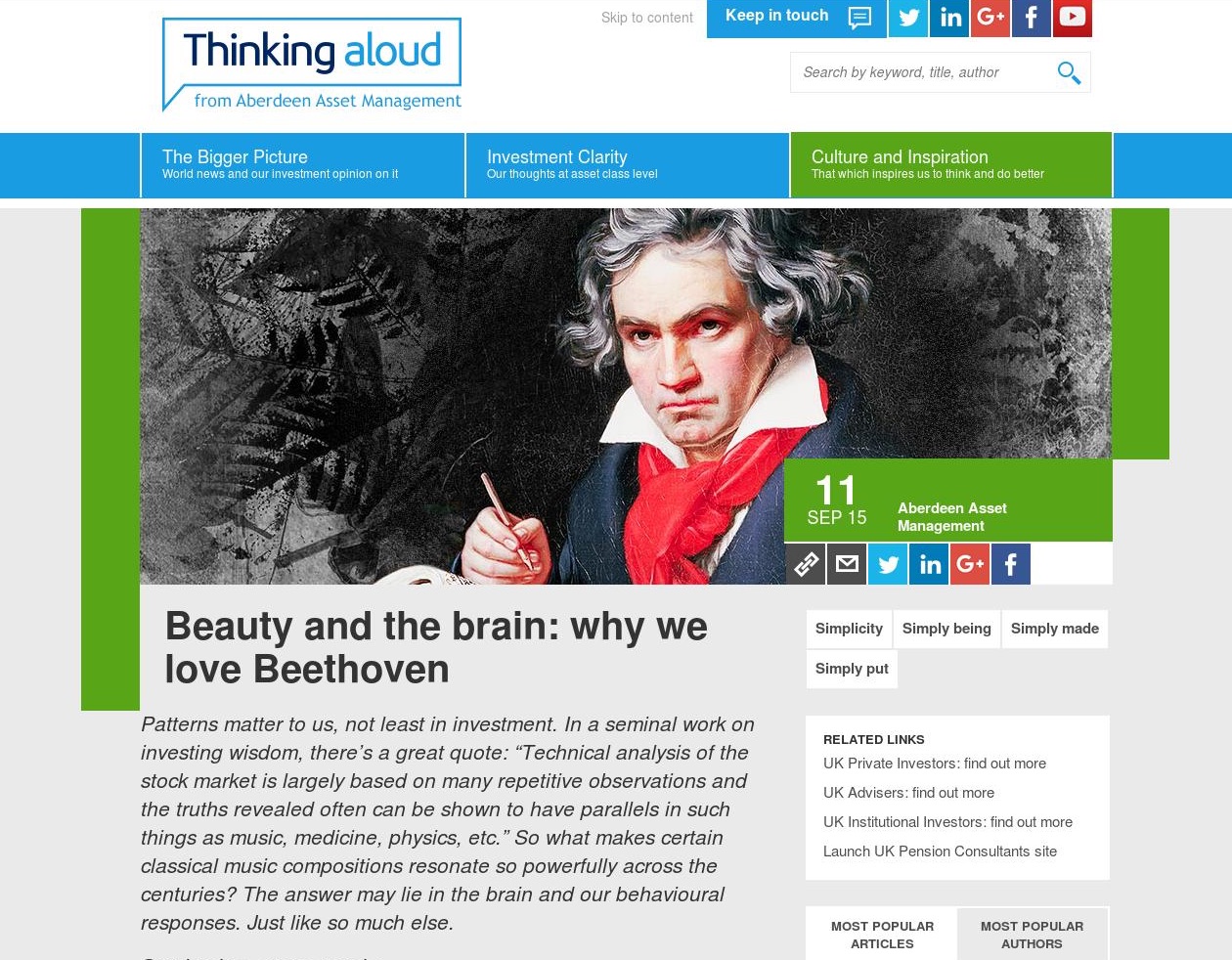 Aberdeen uses Contently’s content marketing platform to manage its process for creating stories and measuring results. “[Ordinarily,] managing the calendar is hard and quite complex,” Whiteman said, “so there’s no coincidence on why we adopted Contently on that front.”

By using the platform to create and optimize content on an ongoing basis, Whiteman can ensure that he’s never without a new story to publish. And most importantly, he’s able to make sure the content he already has is as effective as possible.

Even though Aberdeen has become an impressive publisher in the financial space, the company has still had to deal with its fair share of challenges.

“There’s a big learning curve on how best to produce the content,” Whiteman explained, echoing the thoughts of brands everywhere. “And not just how to produce good, interesting content, but how to promote it.”

Since this realization, Aberdeen has developed a way to consistently produce superior content—getting it to the right readers through a combination of creativity, content management, and strategic paid promotion.

From the U.K., a small editorial team works with in-house writers in the U.S. and Singapore. The writers collaborate on stories with Aberdeen’s investment experts to help promote the investment firms industry leadership.

“If it’s a bond fund manager talking about the next big thing, we try to work out whether they have a strong opinion or something interesting to say,” Whiteman said. “And then, we tie it into what’s important to our target audience as well as to others.”

When the site launched in February, Whiteman initially struggled to find enough internal story ideas that met the company’s standards. But as the site’s profile and popularity increased since then, so too has the number of pitches sent his way.

“More and more employees are submitting pieces and ideas, rather than us having to drag it out of the business,” he said.

Unlike some brands that compile their stories months out, Aberdeen’s development process fluctuates (much like the stock market itself). On average, it takes two to four weeks to complete a story—six months for “hero pieces” with video animations. But to stay as relevant as possible and publish at the speed of news, Aberdeen has also configured a way to post with efficiency—within a week, if needed.

For example, last Halloween, on the morning of October 26, Whiteman was approached with a concept that would feature “zombie companies”—an ongoing topic of conversation in the industry. The story was live by October 30, just in time for the holiday.

“We’re always thinking, is there a PR opportunity?” Whiteman said. “We have to be alive to the fact that others have bigger audiences, but over time there will be places where ours starts to supercede other publications.”

Whiteman works closely with the company’s PR team to regularly develop stories that run in the Financial Times and other industry outlets. And to expand the site’s impact and reach, the editorial team makes sure that their audience gets to read the best content through email newsletters and financial advisory networks popular in the asset management world.

“[Clients] are always looking for content that showcases our products and some intellectual capital around us,” Whiteman said. “PR and content marketing sit nicely side-by-side.”

This May, for instance, when Thinking Aloud published an inventive piece comparing the financial crisis in Greece to the music of British ’80s rock band Dire Straights. The story worked PR wonders, getting tweeted by Reuters Asia editor Peter Thal Larsen and became the centerpiece of a story on CNBC.

Additionally, the company’s animated guide to “The Seven Deadly Sins of Multi-Asset Investing” was picked up by numerous media outlets, including Business Insider, Think Advisor, and Wealth Manager.

For Aberdeen, Thinking Aloud isn’t just about chasing clicks, but remaining reliable and relevant—and in turn, developing a loyal audience. While content is the main focus of Aberdeen’s marketing strategy, the editorial team continues to grapple with how much to spend and where, when it comes to promotion.

“We have faith that by working backwards from the solid foundation of great content, we can become far more effective at distribution and measurement over time,” Whiteman said. “Through Analytics, there’s real value from Contently in terms of looking at engagement and measuring attention.”

As Thinking Aloud looks to build on its first year, delivering a steady stream of quality content remains the top priority. “Building an audience is a bit like being a good friend,” Whiteman said. “Not only do you have to be a good listener in order to be good company, you also have to have something interesting to say.”