In early November, Contently’s editor-in-chief, Joe Lazauskas, profiled Marriott’s thriving content marketing operation, and the main takeaway was clear from the very beginning: Marriott is not only producing great content, but its publishing output is also leading directly to ROI.

As Timpone put it, knowing what it takes to have meaningful conversations with customers means “understanding both the magic and the metrics.” And as someone who’s worked in a variety of industries over the years—technology, beauty, beverage, hospitality, and fashion—she’s learned how to speak to every kind of customer.

We recently visited Marriott’s headquarters in Maryland for an in-depth interview with Timpone, where we talked about the convergence of technology and content, the hierarchy of metrics, and how a millennial mindset—or what she described as the “next-generation traveler”—led to incredible innovation within the hotel giant.

How do you define content for the people at Marriott?

Brands have narratives. They have stories to tell—complete narratives that take time to unfold. The way content is evolving is that brands can now tell narratives that can expand in many, many different ways because the technology is there to help them do it. Ultimately, it’s all a conversation—a two-way, ongoing dialogue.

How has technology enhanced that dialogue?

The obvious one is the platforms themselves. The story I like to tell is that a long time ago, I worked on a very well-known brand in the beverage business; we would bring original films to Sundance, and it was great. I would think to myself, It’s really too bad that there isn’t technology to share this beyond the folks here at the festival.

Now, you can share that content around the world instantly. Social media enables someone to start with a piece of content and engage other people with it. That’s the really fascinating piece of the mix. We are certainly interested in the narrative around our brand, but there’s really nothing better than when we have our loyal guests and Marriott Rewards members co-creating what that could be with us and then amplifying it.

For years, we’ve had co-creation sites where customers. Fans of Marriott Hotels, for example, can propose ideas—things they’d like to see when they travel. That allows us to create content with them. We get to dream up together what that experience could be like and then work to implement some of their ideas such as introducing wireless chargers for mobile devices. Then, in real time, we communicate through social media.

We have a real-time command center called M Live for the purpose of listening to conversations that are either directly related to the dialogue that we’re having about our hotels, or something that’s happening in the zeitgeist that we really want to integrate. 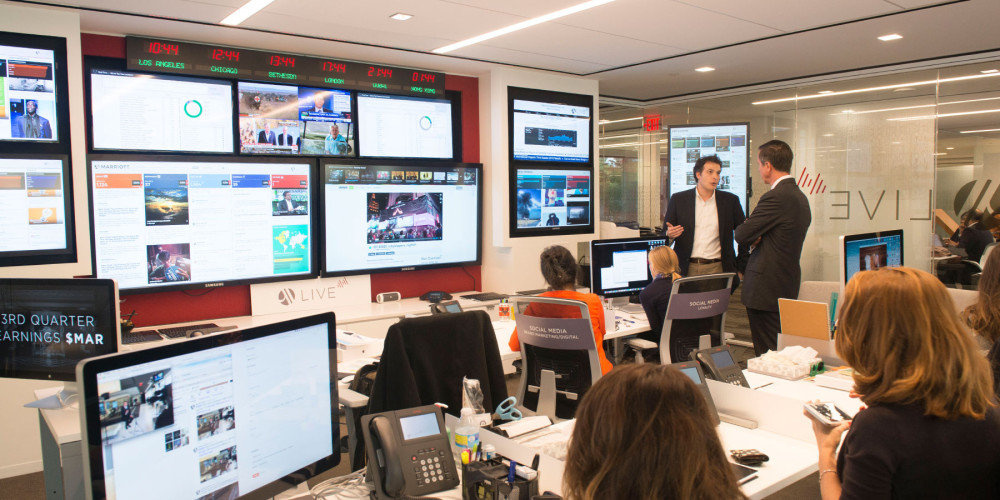 We launched the first one at our Bethesda headquarters, and we just opened an M Live in Hong Kong, with three more planned for next year. This is incredibly exciting because we will create content that is regionally relevant in language and on even more platforms in real time, like Weibo in China.

It’s important that we connect the data with the broader narrative we are sharing. For example, how our digital marketing performance campaigns are working. Really trying to drive toward those destinations that we want to shine a light on.

A lot of brand leaders in other industries come up and say to me, “I want to be doing that,” and my answer is, “So do it.”

It’s kind of like art meets science, metrics meet magic. We’re doing that with our new Marriott Traveler online publication. It looks beautiful and has tons of great informative content, but it’s got a real SEO strategy behind it so our guests can find it.

We also collaborate with the creative community to produce entertainment. If you look at a lot of the data showing where next-gen consumers are spending time, it’s on social media. It’s on online video. We are part of that, and we’ve started that with some really groundbreaking original short films that star our hotels: Two Bellmen and French Kiss.

I hired a former colleague of mine from Disney ABC, David Beebe, who is the head of creative and content marketing. He’s been leading the charge and making those content marketing dreams a reality. He’s focused on mapping those productions and engaging with the partners to go get that done. While David and I come from the content business, really any marketer today would admit that if your efforts are just a one-way telling, then it’s not going to go much further. It has to be a shareable story to engage people.

Technology is flattening out how audiences are created. The media business was really all about owning the creation of content and the reason for people to engage. Being a marketer meant trying to get in the middle of that. Given my background in media, I’ve spent years in the business of making content and monetizing it. A lot of brand leaders in other industries come up and say to me, “I want to be doing that,” and my answer is, “So do it.”

There seems to be a natural friendship and tension between travel and entertainment. Do you think that’s unique to travel or should more brands take on the challenge?

It’s not so much about the entertainment business. It’s about a creating a relationship that is similar to any interpersonal encounter. There’s a give and a take of how storytelling would work, right? It’s just being done through these technologies now. If you know how to do it in real life, there’s a decent chance you know how to do it using the new techniques.

What are some of the metrics that you think more content marketers should be paying attention to?

I think for us it’s very, very specific. Ultimately, we’re adding up to what I call “true loyalty.” The idea is that we want the content to help someone to discover a new brand, be more engaged with brands across our portfolio, and I want that to happen over and over throughout a lifelong relationship.

The metric that I have specifically for this is Marriott Rewards, our loyalty program. The idea is to create the right conversation about what’s happening with our brands so that members can easily engage.

Without that target customer, it becomes an art project as opposed to a business strategy.

Of course, more granularly, the team that’s actually creating a new piece of content, they’ll look at engagement rates. Did people watch the content all the way through to the end? Did they click to make a purchase on Marriott.com? What were the completion rates? But that is a small part of the whole scene. What trumps them all is: Are we engaging the right customers so they keep coming back and remaining loyal for life?

You just touched on something that I love—getting people to come back again. I think a lot of content marketers think end to end. They think point of purchase and they’re not thinking about this being a lifetime customer. How do those audiences vary for you?

There are many ways to look at targeting audiences. It can be very distracting, and with all the data it gets even more distracting.

Before we did all of this cool stuff on the content side, our house rule was, “Let’s identify who is the most profitable target for us.” We spent a great amount of time doing behavioral segmentation to identify our most profitable cohorts. It was a deep-map exercise and there were many, many different options along the way. Once that equation was done, the result was simple. There are one or two that really got our attention. We know who they are, and they become a center point, a bull’s-eye for what we try to do.

I always believe that—especially when you’re working with multiple brands and working globally—the only thing that’s true across every brand and across every country is that there’s a definition of a target customer or guest that is more profitable than another. Marketers must make sure they have a really strong definition of the target. Then you can have as much fun as you want.

What’s one of the biggest changes within the industry that we should pay attention to?

This won’t sound like a breakthrough, but it’s worth emphasizing: Mobile has obviously been around for a while, but I think that it’s still pretty early. In the last two years, it’s really separated out for me who’s really getting it on mobile and who’s not. It definitely shows. You can become less relevant in a very short amount of time if you don’t have mobile integrated into what you’re doing.

If you could accelerate something, what would it be?

I think that one of the things I would task any large platform player is to be more helpful in how data is presented. You can get any data you want. That’s not the issue. The issue is that there’s ways to slice and dice and create overall macro-themes.

With all these conversations being had, content being made, and data being leveraged, what audience should we be keeping an eye on?

One of the things that’s becoming really clear is that there’s this impressive groundswell, a sort of tsunami across different industries. It’s how demographics are shifting, but I don’t want to say millennials. It’s not about them. It’s about their mindset, and there’s a real insight there. It’s a multigenerational thing that’s happening. We want to address their needs as guests. Not just them personally, but the mindset, and we’re doing that by weaving more digitally native things into what we do everyday.

For example, when we did research into Marriott rewards, we learned that what millennials want more of is instant gratification from their loyalty program. They’d respond with “I want to earn a little bit of points to get a little bit back” and “I want to be able to redeem fewer points for something smaller along the way.” So we said, “Great! Let’s try something out,” which is when we first launched Plus Points (which is now rebranded to MRpoints).

When you create a piece of content or retweet something from us, you get a small batch of points. Even if it’s not adding up to a stay right away, you could get a gift card, or something like that, right away. It actually turned out to be more than an acquisition play to get new customers in the door. We absolutely got millennials talking, without a doubt, but it actually got guests who’d been with us for many many years to engage differently with us. It was about behaviors. That’s what I mean about the mindset and how technology has changed most everything.

It’s really prompting more thoughts around what other kinds of content we want to do. By trying new things, new technologies, and new ideas, we’re discovering the high-value things that are really worth it.

This interview has been edited and condensed.