Mobile Advertising Spend Is On the Rise. Here Are 6 Charts to Prove It

We all know by now: We are addicted to our smartphones. Need evidence? Take a gander at this New York Times article about “distracted walkers,” people who are so obsessed with their phones that they can’t even walk from place to place without burying their faces in a screen. It’s gotten so bad that the federal government is offering $2 million grants to cities to “combat distracted walking.” Seriously.

If you need even more evidence, take eMarketer’s December study, “Mobile Marketing and Marketing Trends Roundup,” which confirms that the obsession with our mobile devices is officially widespread. By the end of 2015, digital ad spend will surpass desktop ad spend. To be exact, eMarketer predicts mobile will account for 51.9 percent of all digital spend.

The revolution has happened quickly. In 2014, mobile spending increased 80 percent, and this year by another 59 percent. By 2019, eMarketer predicts that mobile spend will account for just about 70 percent of total digital spend. 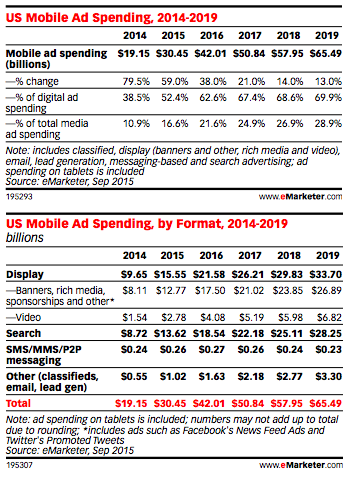 How did we get to this point so quickly? The report estimates that U.S. adults spend an average of 2 hours and 51 seconds fiddling with their phones every day. To put that in context, a 2015 study by ZenithOptimedia put our total media time at 490 minutes, or more than 8 hours a day—a majority of the time we’re conscious.

The rest of that time is partly the reason that, despite mobile’s takeover of digital spend, mobile still accounts for only 17 percent of total ad spend. TV is still the major player when it comes to ad spend, though eMarketer predicts that, too, will change by 2019.

More than half of smartphone users already play mobile games regularly, and by 2019, that number will jump to 77 percent of the smartphone population. 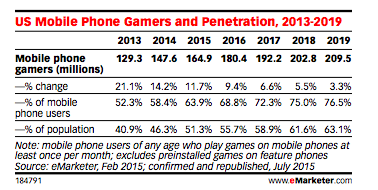 Despite this, eMarketer notes that ad spending is “not particularly robust” in mobile gaming—perhaps a missed opportunity for media buyers who are unaware of the extent to which these apps have penetrated the market.

App-install ads, which are just display ads with a call-to-action (CTA) button that users can click on to immediately begin installing an app, seem to be all over the Internet. Just as branded content has become increasingly reliant on paid social spend for traffic and engagement, the app market has reached such a saturation point that relying on word of mouth or earned media just doesn’t cut it anymore. 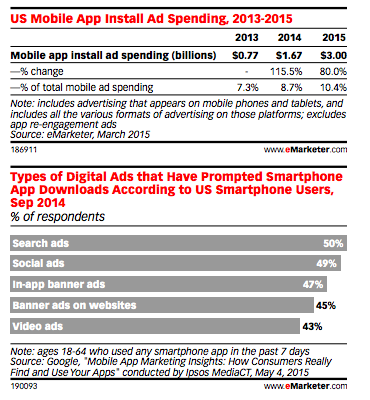 Spend has increased on this particular type of marketing by 80 percent since last year and, surprisingly, video ads were the least effective format. If banner ads still have any life left, it may be here, as you can see in the chart above.

The mobile ad market is all about programmatic

Despite facing criticisms related to lax viewability standards and ad fraud, it looks like programmatic ad spending is set to have a resurgence on mobile. The bump in 2014—234 percent—is particularly shocking and shows how rapidly marketers have committed to programmatic mobile advertising. 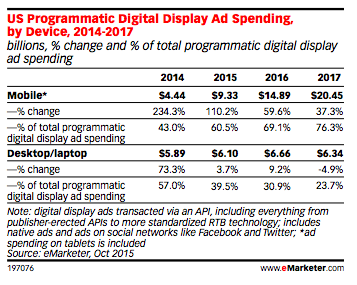 eMarketer notes that Facebook is the main engine driving this incredible shift. The research firm classifies Facebook as a programmatic ad platform, and its mobile revenue in the U.S. is set to hit $5.9 billion this year alone. The report also points out that companies will likely use Facebook’s structure as a model for new mobile programmatic networks.

Speaking of Facebook, a study by comScore and Opera Mediaworks took a look at how video in-feed ads—the kind you see scrolling through your News Feed or Instagram feed—perform. The results suggest that these clips have a slight impact on factors like purchase intent, recall, and favorability. The results aren’t outstanding, but at least there is some evidence that all of this spending isn’t going to waste. 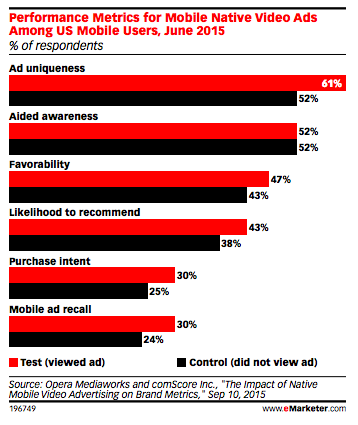 Overall, there’s little evidence that the mobile ad market will be any more effective than the desktop ad market; in fact, the move could just exacerbate the many problems facing digital advertising, including adblocking, viewability standards, ad fraud, and user annoyance. But it’s where the user is going—and where the user goes, the advertiser follows.