A few weeks ago, I wrote an article called “Why Your Brand Needs to Have an Opinion.” It was a quick piece to write, but it struck a chord. Many folks shared it, and others reached out to me with some version of “Amen!” or “YES THIS!” or “Hi Joe—our digital agency can help with your brand opinion if you have time for a 27-minute call!”

I think it resonated because I wasn’t just calling for brands to have any old opinion but to stand for real, human causes. Increasingly, consumers want brands—and the people who work for them—to fight for something more than profit. According to a recent Nielsen survey, more than half of people across the globe are willing to pay more for products and services provided by companies that are committed to positive social and environmental impact. In the U.S., 91 percent of consumers are likely to switch to a brand associated with a good cause.

Not surprisingly, these attitudes are reflected in content marketing. Most successful branded content has some sort of cause behind it—big or small. It’s a trend I see repeatedly while researching what campaigns resonate the most for these “Best of Branded” roundups. Sometimes it’s a movement as monumental as equal rights; other times, it’s just making sense of a marketing industry that John Oliver ought to parody every single week.

In October, we saw some truly impressive cause-driven branded content.

Much thanks to our Editorial Intern, Esme Cribb, for her invaluable research help. 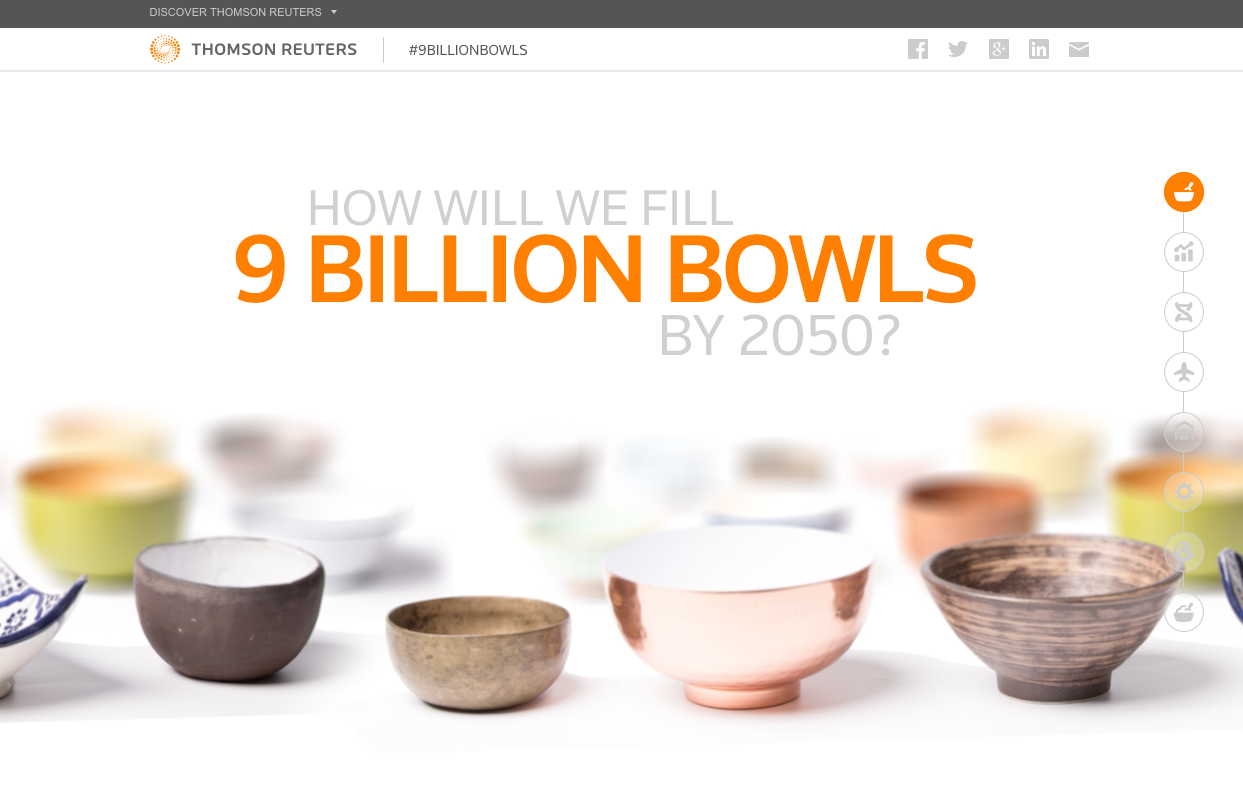 For its latest content marketing initiative, Thomson Reuters is taking on a very significant and very frustrating issue: the broken food chain.

“On paper, we produce enough food to feed our current population of 7 billion. Yet an estimated 805 million people go to bed hungry each night, and hidden hunger – or micronutrient deficiency – affects an additional 2 billion.”

The interactive feature, which includes longform text and documentary-style videos, clearly presents the magnitude of this daunting problem. It also delves into data-fueled solutions. The company leans heavily on its internal experts in the piece, prompting readers to follow up with questions on LinkedIn and naturally reinforcing Thomson Reuters’ thought leadership in the process. “9 Billion Bowls” is a Contently Award finalist, and for good reason: It’s one of the most intelligent pieces of branded content to date.

GE is basically the LeBron James of content marketing at this point, constantly reaching levels you didn’t think possible. Up next is a partnership with National Geographic to create “Breakthrough,” a six-part television series that tells stories about cutting-edge science that could change—or save—our world. Each episode is being directed by a legend: Ron Howard. Peter Berg. Paul Giamatti. Brett Ratner. Akiva Goldsman. Angela Bassett. “Breakthrough” launched on November 1, with the first episode focused on GE mobile labs that can be dropped into epidemic crisis centers. So yeah, it’s technically not from October, but it’s so impressive that I had to include it in this roundup.

GE Vice-Chair Beth Comstock has said she wants GE to be the world’s leading source for breakthrough science content. Between this show, GE Reports, experimental podcasts, and various web series, GE is certainly on its way.

While AirBnb’s “Mankind” campaign definitely creeped some people out, JetBlue’s HumanKinda documentary and accompanying social campaign will delight you. The documentary stars comedian Sam Richardson, who goes on a quest to figure out why people have become so obsessively busy—more humankinda than humankind, if you will.

Richardson talks to an overwhelmed mother and a dude who has eight jobs, and introduces them to people who try to help them feel less busy. It’s surprisingly fast-paced and fun, and terrifyingly easy to relate to. You even learn some pretty awesome stress-management tips along the way.

If “OMG SO BUSY” has become your go-to response to the question “How are you?” this is for you. 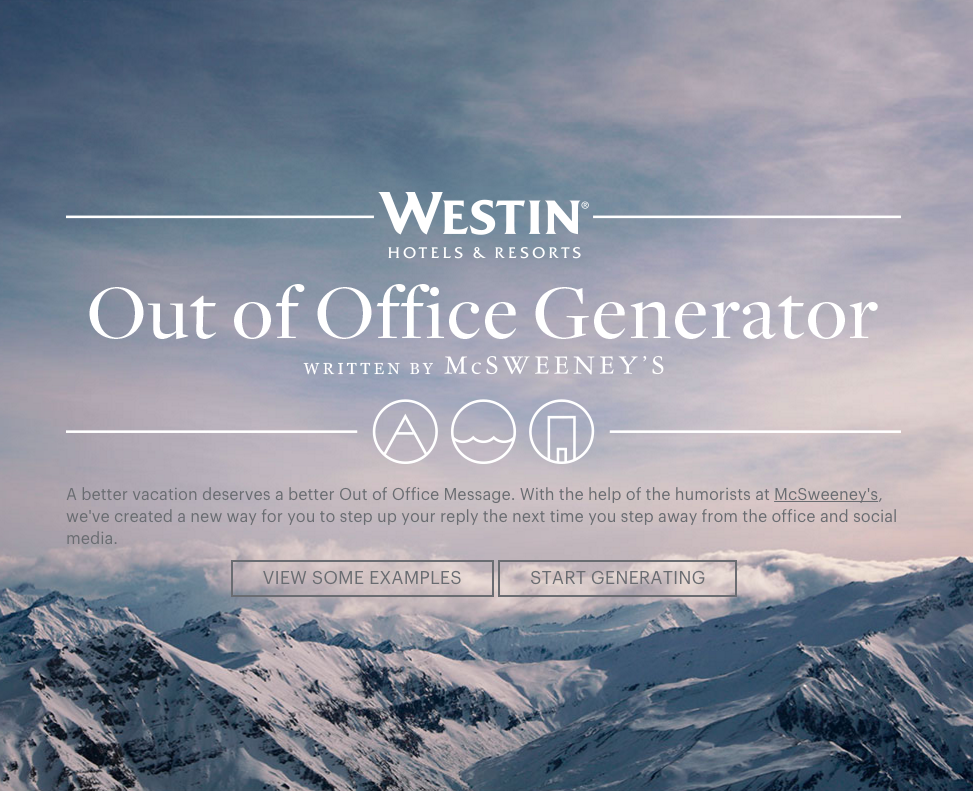 Speaking of being busy, let’s talk about out-of-office messages. Specifically, vacation messages. Over the past few years, we’ve grown so guilty over unplugging while on vacation, it’s become a rule that any OoO message has to include a lie that you will “have little or no access to Wi-Fi.” I’ve seen people do this while in Florida. Florida! It has to stop.

That’s why I love this out-of-office message generator from hotel and resort chain Westin, made with help from McSweeney’s brilliant copywriters. The messages are hilarious and come in both text and video form. I already made one for my next vacation:

Thanks for your email. Rest assured that it’s safe and sound now, tucked away in my inbox, ready to be read when I return, refreshed, from the beach I’ve been basking on since 12/26, where I am currently swimming with a sea turtle. His name is Jeff—you’d really like him. Gorgeous shell pattern — not showy, just a nice, classical design. We were walking beneath the beachfront pergola earlier, headed toward the yoga studio, when—well, I’ll tell you when I’m back at work, on 01/02. Until then, please contact jordan@contently.com while I’m away. Best, Joe

This is a great way for a brand to earn some love, and a great way for me to troll Jordan, our senior editor. I can’t wait until he suddenly starts getting emails from a bunch of PR people asking about Jeff the Turtle.

The Alex and Ani App 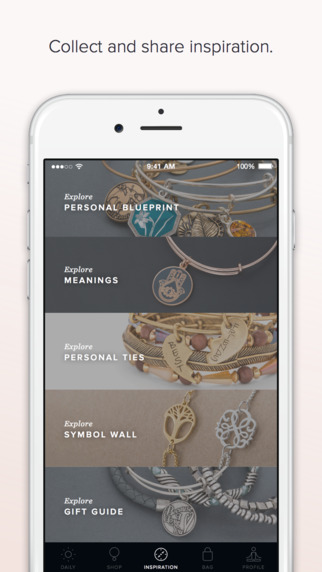 When most brands launch apps, they fail. But the Alex and Ani app, launched in early October, has over 80,000 downloads so far. In fact, it’s so successful that it’s already driving five percent of the brand’s revenue, according to Digiday.

The key, it appears, is a strong content play. Alex and Ani’s vice president of e-commerce, Igor Bekker, said the app is 70 percent content-driven and 30 percent transaction-driven. That lifestyle content includes motivational quotes, articles that dive into the meaning behind different charms, an explanation of your “personal blueprint” (the symbols that define you), and even an “Orgham Oracle” that will allow “the ancient Orghams” to answer a question in your mind.

Does this all sound kind of weird? To a bro like me, it sure does. But Alex and Ani tested over 100 versions of this app, and the brand seems to really know its charm-loving audience.

“We have a loyal customer,” Bekker told Digiday. “It goes back to our ethos, which is that if we connect with the customer then business will follow. We want to maintain that experience in digital.”

That’s an ethos every brand should follow. Forget if you build it, they will come. Instead, think: If you connect, the business will come.

Think I missed anything? Have suggestions for next month’s roundup? Holler at me @joelazauskas on Twitter or lazer@contently.com.