Pot Noodle—you know, the noodles-in-a-cup company—recently released a TV ad called “You Can Do It.” In the first few moments of the spot, viewers are lured into thinking that it’s the same old story: Some guy lifts heavy things and punches the air while wearing a hoodie, all in the hopes of becoming a champion. However, it turns out that he’s not exactly the champion you thought he’d be.

In case you’re at work and can’t watch the video, here’s the basic gist: A skinny man trains in musty gyms for a boxing match, but it turns out he’s the sexy round card holder instead of the boxer.

The twist ending forces viewers to challenge the way that they think about gender roles. The surprise that viewers feel in the last few seconds has made the ad go viral—”You Can Make It” has already been viewed over 1.4 million times in less than a month.

With gender so frequently in the news these days, companies are realizing that it can be smart to create content that caters to a variety of audiences.

Here are five more campaigns forward-thinking enough to tell stories that fall outside of traditional gender roles—and reap the rewards in the process.

Sport England, an organization that funds projects that encourage movement, recently conducted a study that revealed that U.K. women are exercising less because they are intimidated by sports and ashamed of their bodies. The “This Girl Can” campaign features women of all ages and body types.

Apologies in advance: You’re going to have “Get Ur Freak On” stuck in your head for the rest of the day.

“This Girl Can”‘s website is a fantastic example of how a campaign can carry over from commercials into online content. The site features the story of each woman shown in the commercial, and lets users submit stories about how they started getting active. There’s even a list of sports women can try out, including information like how much they cost, what equipment is required, and how many calories are typically burned in an hour.

Publications like the Guardian have criticized this campaign for infantilizing grown women by calling them girls, and suggesting that women should only exercise so that they can feel sexy. Fair objections, but, at the very least, this campaign is shining a spotlight on bodies of all types, and saying that they’re all capable of moving in a variety of ways. Now who wants to sign up for some roller derby?

It is pretty much completely taboo to talk about menstruation in India. Because of this, there are still many myths that surround the topic. It’s commonly believed that if an “impure” woman—i.e., a woman on her period—touches a jar of pickles, the pickles will rot.

Whisper Sanitary Napkins decided to bust that myth once and for all.

This campaign aims to break all sorts of menstruation rules in India. For example, women on their period aren’t supposed to run, play, or, in some cases, even go outside. But here, the main character does all of those things with a smile on her face.

According to AdAge, more than 2.9 million women pledged to “touch the pickle jar” after seeing this ad, and Whisper’s share of voice grew from 21 percent to 91 percent in its category. Plus, BBDO India won a Cannes Glass Lion for the campaign.

I, for one, am never going to look at pickles the same way again.

The Philippines branch of Pantene, a hair products company, was experiencing a disconnect from its female audience. In an attempt to reestablish this connection, Pantene researchers decided to figure out what it was like to be a woman in the workplace. According to the resulting case study video, the researchers found that 70 percent of men said that women needed to downplay their personality in order to be successful in the workplace. And 58 percent of women agreed!

Clearly, Pantene had stumbled upon a major insight about their customers. But rather than getting bogged down in the negativity that women experience at their jobs, the company decided to lift their consumer up. This video is the result.

By the time the P&G case study video was released, the “Labels Against Women” ad had garnered 31 million impressions. If earned media is included, the video had over 200 million impressions. Clearly, this ad—which was created with a Filipino audience in mind—had a far more wide-reaching audience than originally intended. Pantene even won a Cannes Bronze Cyber Lion in 2014 for the spot.

As is to be expected, this ad has its critics. After all, the commercial is saying that women shouldn’t care about labels—but also that they should buy Pantene. That’s a bit of contradiction. But at least Pantene isn’t trying to sell their product by using negative stereotypes of women. Baby steps, everyone.

The #ILookLikeAnEngineer campaign all started with Isis Wenger, an engineer at tech company OneLogin. After she was featured in an advertisement for OneLogin, people began questioning if she actually worked for the company on social media. As Wegner shared in a Medium post, there were plenty of sexist comments: 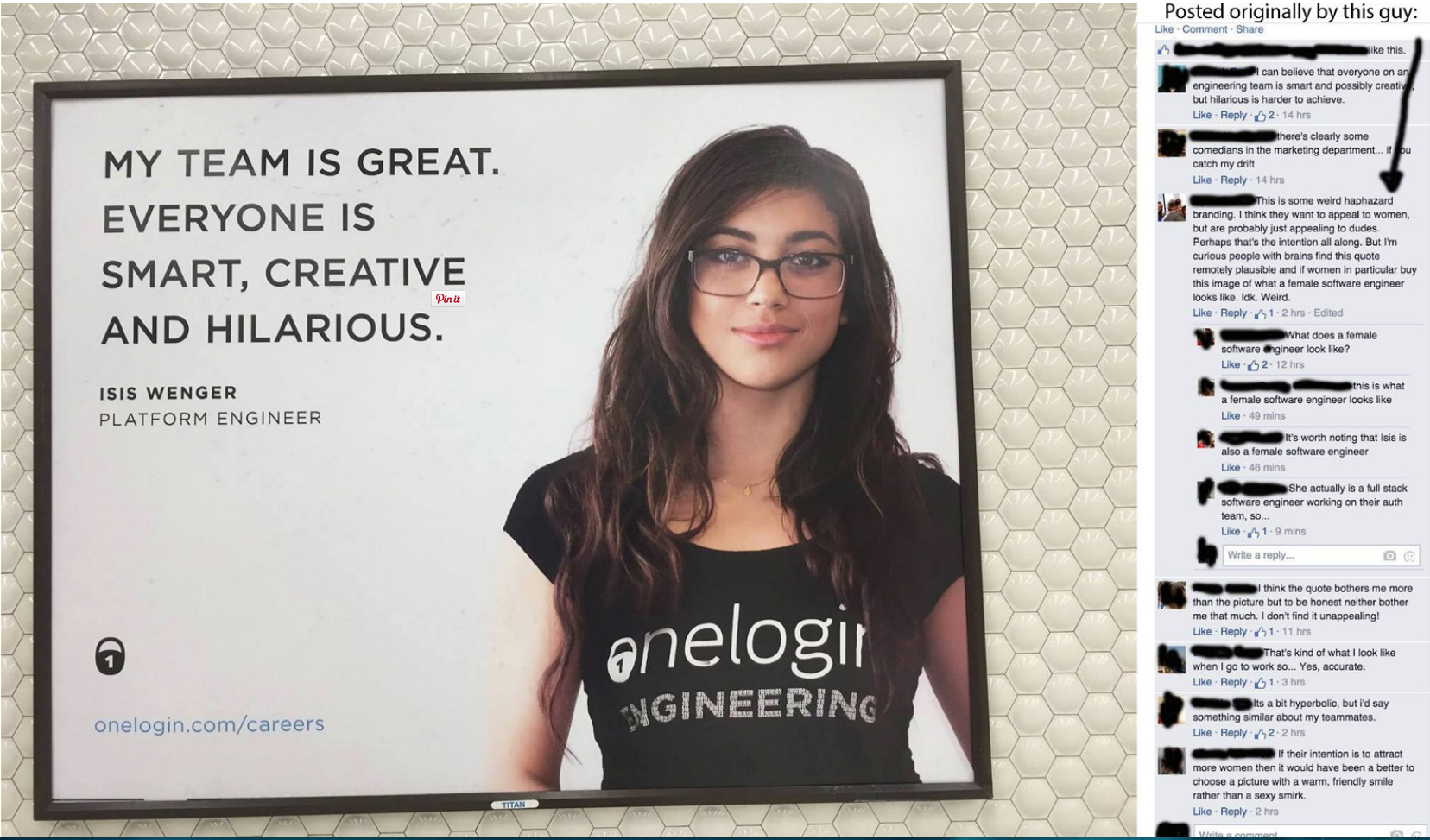 Understandably, Isis was shocked. She was an engineer, and was surprised that anyone could think that all engineers look the same. As a result, she started the #ILookLikeAnEngineer campaign on Twitter. Within days, it had gone viral.

Last week, domain provider Rightside made an undisclosed donation to #ILookLikeAnEngineer to help fund the display of billboards in the Bay Area. Hopefully, this campaign will continue to promote the message that anyone can be an engineer, regardless of what they look like.

This ad is probably the most controversial of the bunch, and it comes from Indian network provider Airtel. According to this report by the nonprofit Catalyst, Indian women only represent 32 percent of the country’s work force, and earn only 62 percent pay for every rupee that a man earns for equal work.

In the ad, a female boss tells an employee that he has to stay late to finish a project. By the end of the spot, you realize that he’s not just working for her—he’s also her husband.

A lot of people aren’t happy about “Boss TVC.” If you can stomach some serious sexism and spelling mistakes, I dare you to read the comments section of the YouTube video.

Despite some of the criticisms that these commercials have faced, it’s clear that advertisers are starting to realize how important their position towards female equality is for the public image of their company. While these ads aren’t perfect, at least we’re starting to move away from the time when someone thought it was a good idea to depict a woman as a headless set of breasts.