12 Things Marketers Can Learn From the Esquire Archives

Esquire, founded in 1933, flourished through the Great Depression, and in the 1960s was considered on par with The New Yorker as a pioneer of New Journalism. Stories written in this style combined journalistic research with narrative techniques taken from fiction writing. Then, Esquire boasted stories by Gay Talese, Tom Wolfe, and Norman Mailer, but today, the publication is known less for journalistic relevance and more for the the time that its UK editor called women “ornamental.”

With its reputation diminished, Esquire has decided to commemorate the publication of its thousandth issue by turning its 82-year archive of back issues into a new searchable subscription site called Esquire Classic. The move is not only a smart way to remind readers of the history behind the name, but it also opens up a low-risk revenue stream.

For us, however, the launch was a chance to explore thousands of vintage print advertisements. We took the opportunity to report on how content marketing has changed over the last century and what marketers can learn from these classic campaigns.

This spread from September 1933 for the Talon Slide Fastener makes the product desirable without ever going into detail about how it actually works. The inset on the right, for example, describes how the product is “absolutely invisible” and “eliminates ugliness,” but it never gets bogged down in technicalities that are probably self-explanatory. Given the ad’s elegant design and the fluid writing style, the consumer doesn’t need to understand exactly how the fastener works in order to want it. 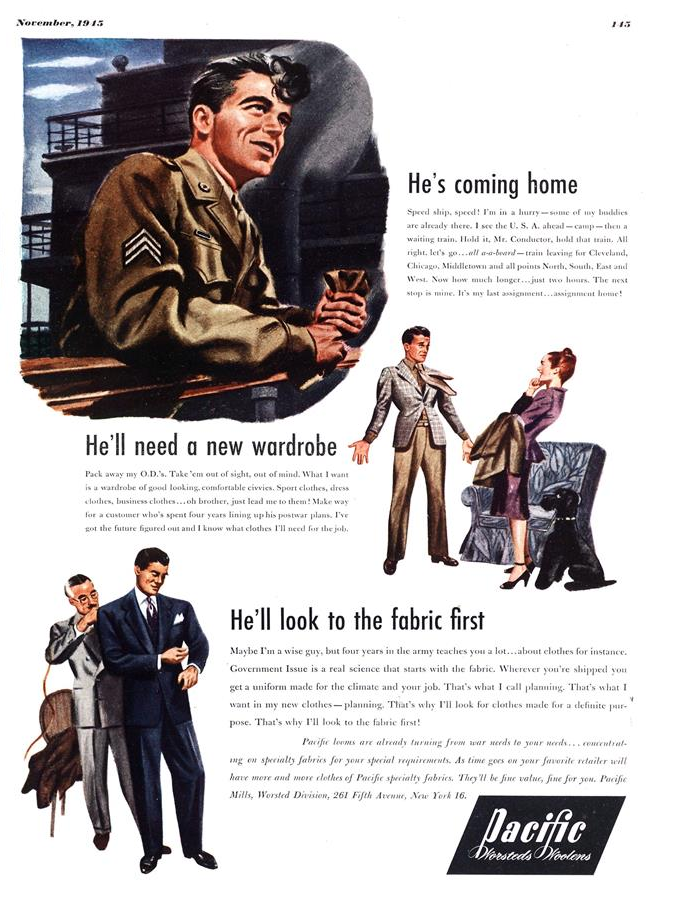 By November 1945, World War II had been over for two months, and as the United States ended rationing on the homefront, advertising started to pick up again. This ad for Pacific Mills emphasizes a transition back to peacetime and specifically reaches out to those welcoming back returning military personnel. It capitalizes on a very specific point in time and demonstrates an awareness of consumer needs that won’t last long. 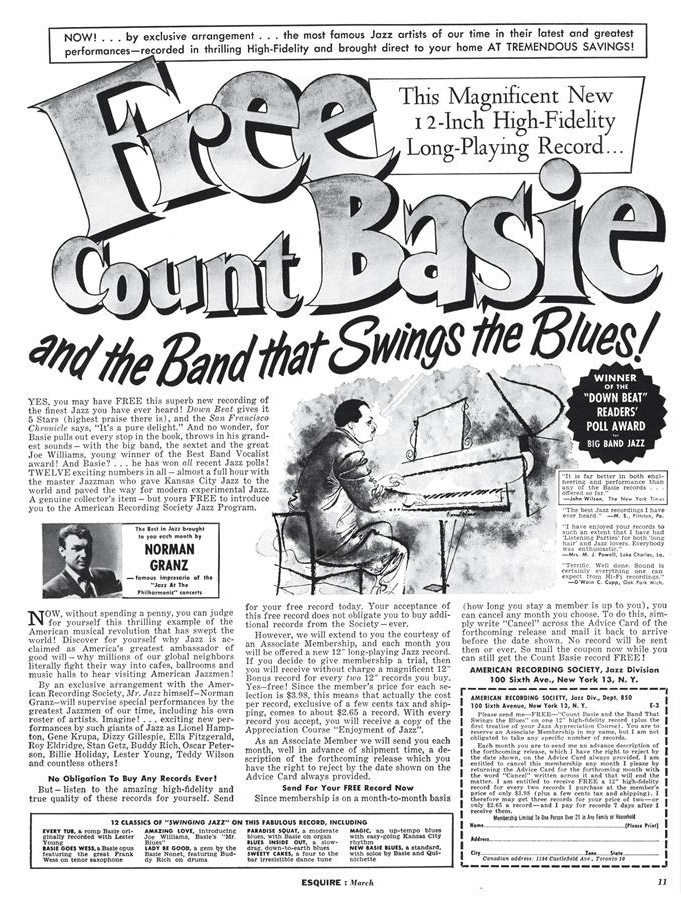 This text-heavy advertorial from March 1957 for the American Recording Society leads with an offer of a free record and keeps the tone consistent throughout. Every section goes into detail about a different consumer benefit, from the original collectible record to a membership deal with additional freebies to the option to cancel at any point. The body copy is as concise as a piece of news and never distracts the reader from the offer. 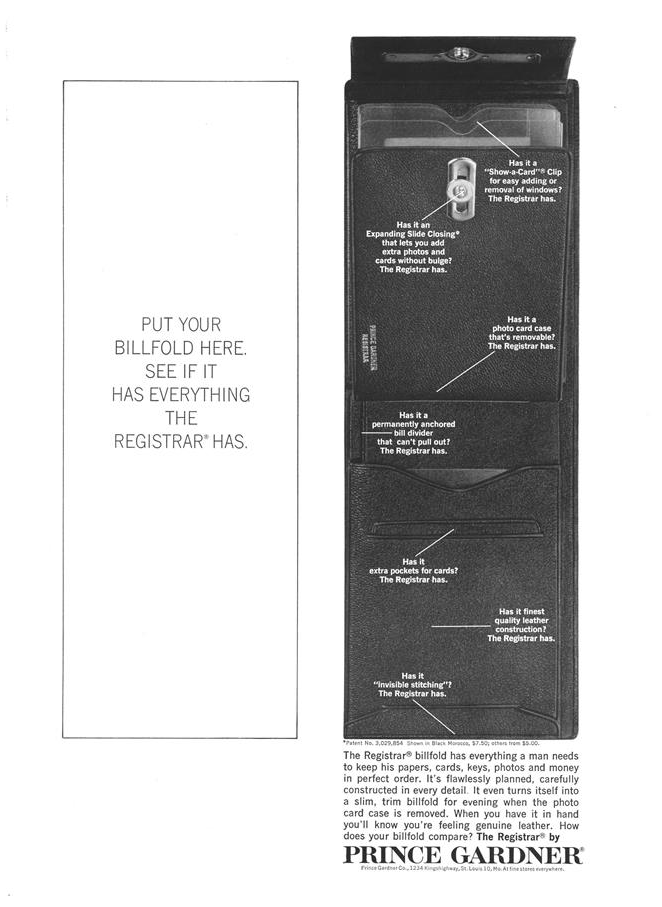 Reader participation turns messaging into a dialogue rather than a monologue. This Prince Gardner ad from June 1963 invites the reader to conduct a side-by-side comparison, pointing out product attributes—invisible stitching, extra pockets, an anchored bill divider—using clear visuals. Prince Garner makes it easy to see why its products are better than what the readers already have.

5. Don’t be afraid to take risks 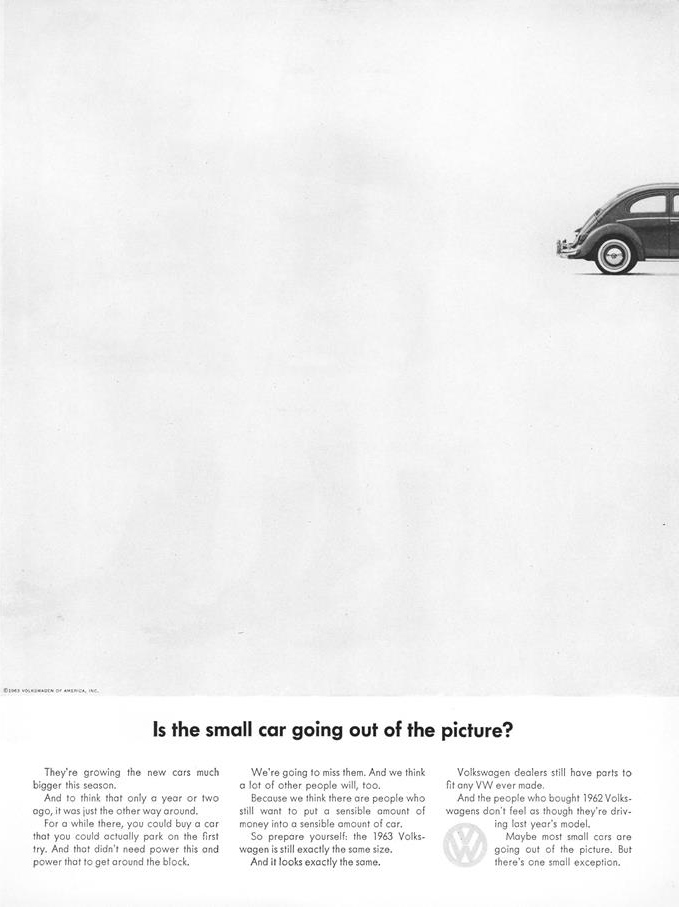 Originally created in 1959, the “Think Small” campaign for Volkswagen took an industry based on luxury and reimagined it through the lens of simplicity and minimalism. While muscle cars and vehicles built for growing families previously dominated auto sales, Volkswagen turned the Beetle’s size and form into selling points in print ads that made the most of white space and scaled-down visuals, turning those perceived deficiencies into consumer benefits. The copy across a series of print ads points out that the Beetle is a smart economic choice with an advanced engine that doesn’t need frequent oil changes or repairs. This was a calculated risk that paid off and changed advertising history. 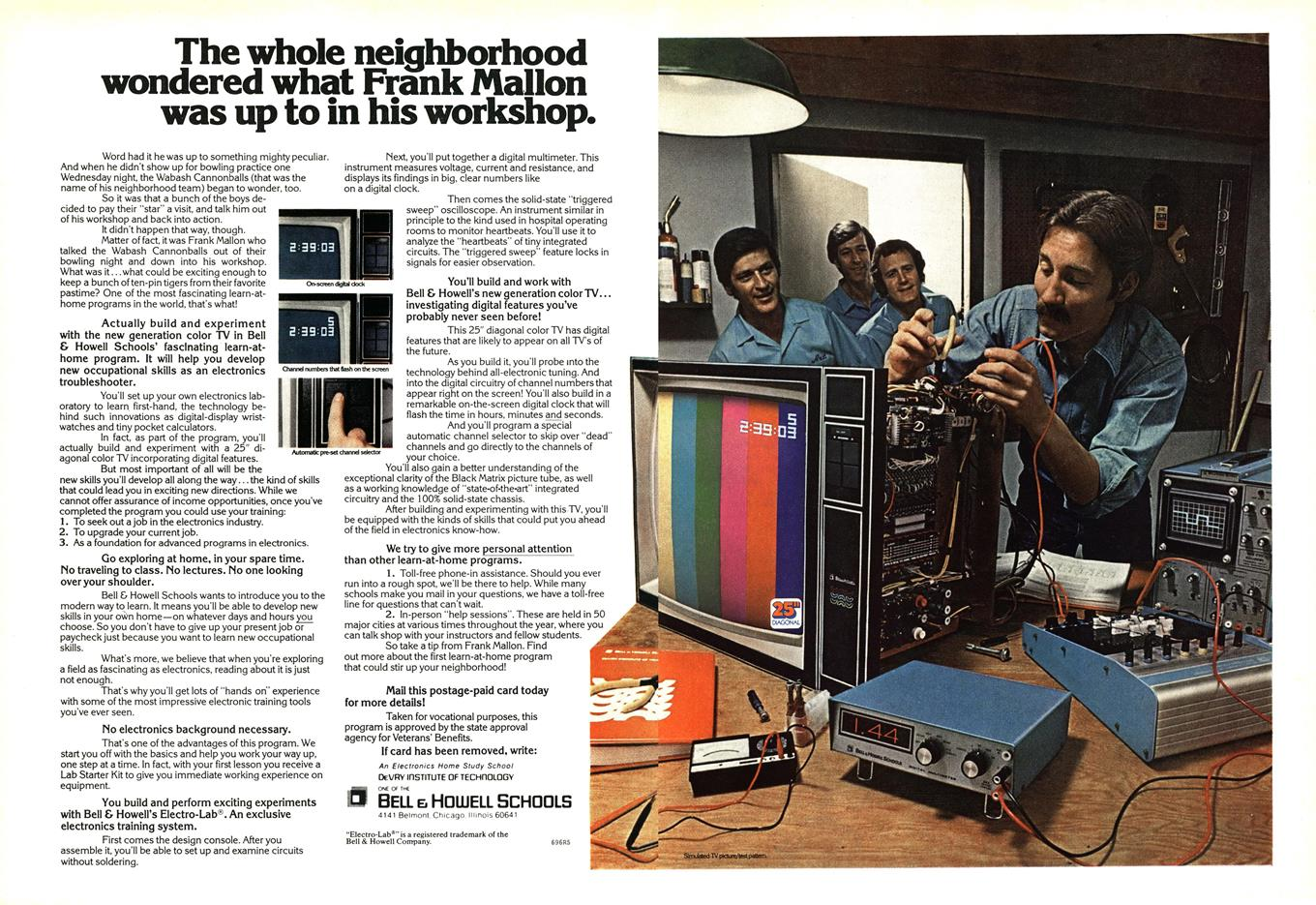 Every product has a unique story, but the challenge is figuring out how to tell it in away that’s compelling. This January 1976 ad for Bell & Howell Schools’ learn-at-home program is based on a fictional student discovering a passion for electronics, which earns him the respect of his peers. The reader is then offered a chance to participate in their program and embark on a similar adventure. By drawing the reader into the narrative, this ad takes a fairly bland service and frames it as a way for the reader to become popular.

7. Don’t be afraid to go under the hood 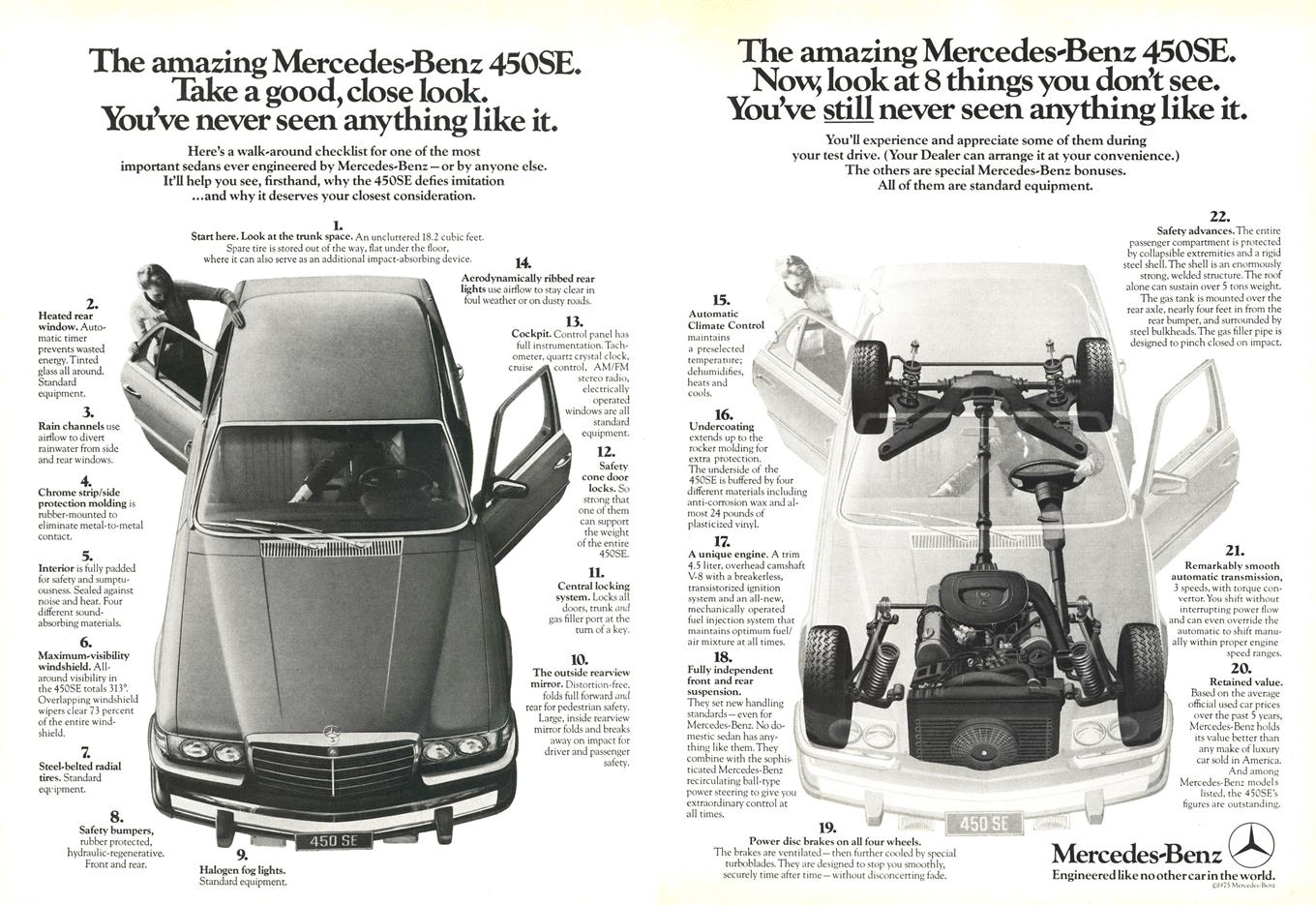 This January 1976 ad for the Mercedes-Benz 450CE doesn’t shy away from technical specifications that would go right over the heads of most people. But the brand balances these complexities with visuals and subheaders that make the info a bit easier to digest. (Think of it as a listicle that predates BuzzFeed by about 40 years.) The overall feel of the ad speaks to the quality, inside and out, and engineering expertise to be reckoned with. Whether or not the reader remembers the specifics, the broader message still gets across. 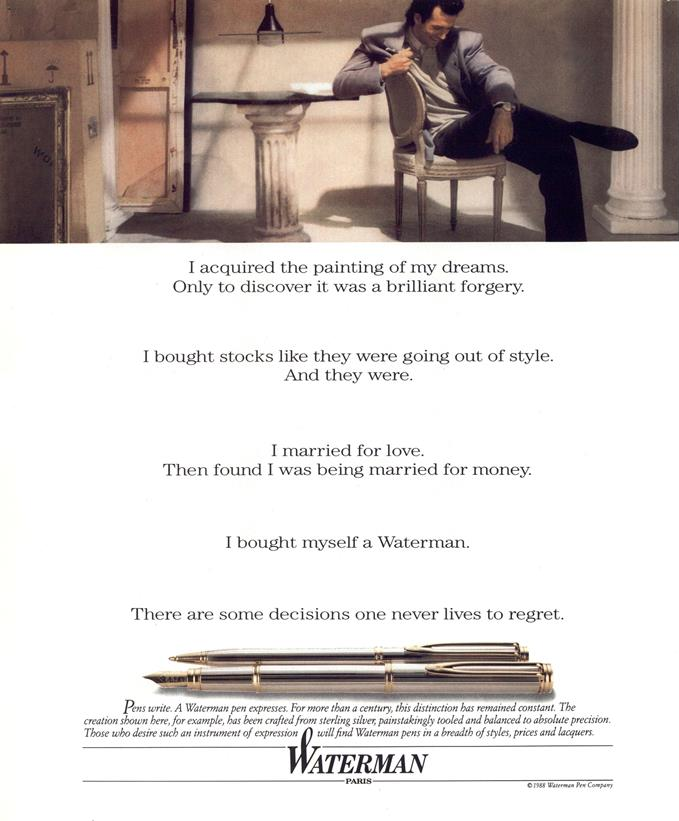 A little genuine humor can be worth more than a lot of dry copy. This Waterman ad from December 1988 sticks with the reader. Like a good joke, most of the anticipation is in the setup, and the solid payoff means that reader won’t feel like they wasted time looking at this page. For a product like a pen, which isn’t exactly sexy, humor erases some of the formality and masks the marketing angle so that a punchline can turn into a payoff. 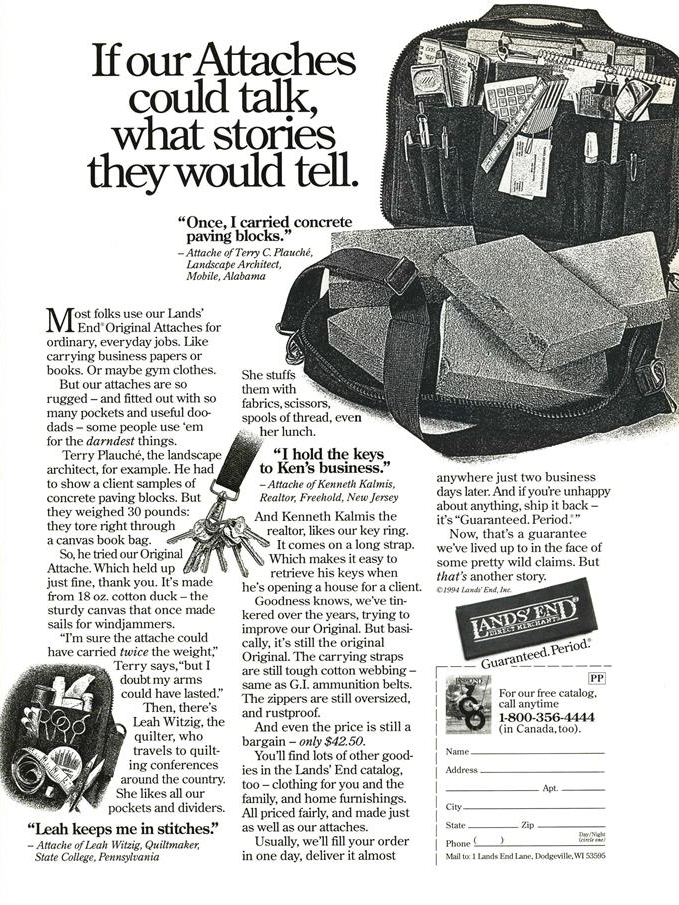 Even in this Lands’ End ad from November 1994, you can see how marketers were having fun with the self-promotional angle of advertorials. Here, the brand anthropomorphizes attache cases, turning them into characters in the narrative. It’s is a creative risk that could potentially make the brand seem immature, but the copy’s conversational tone helps balance this out by emphasizing the bag’s high-quality construction and reasonable price. Working in silly satire isn’t easy, but those that can pull it off will immediately stand out. 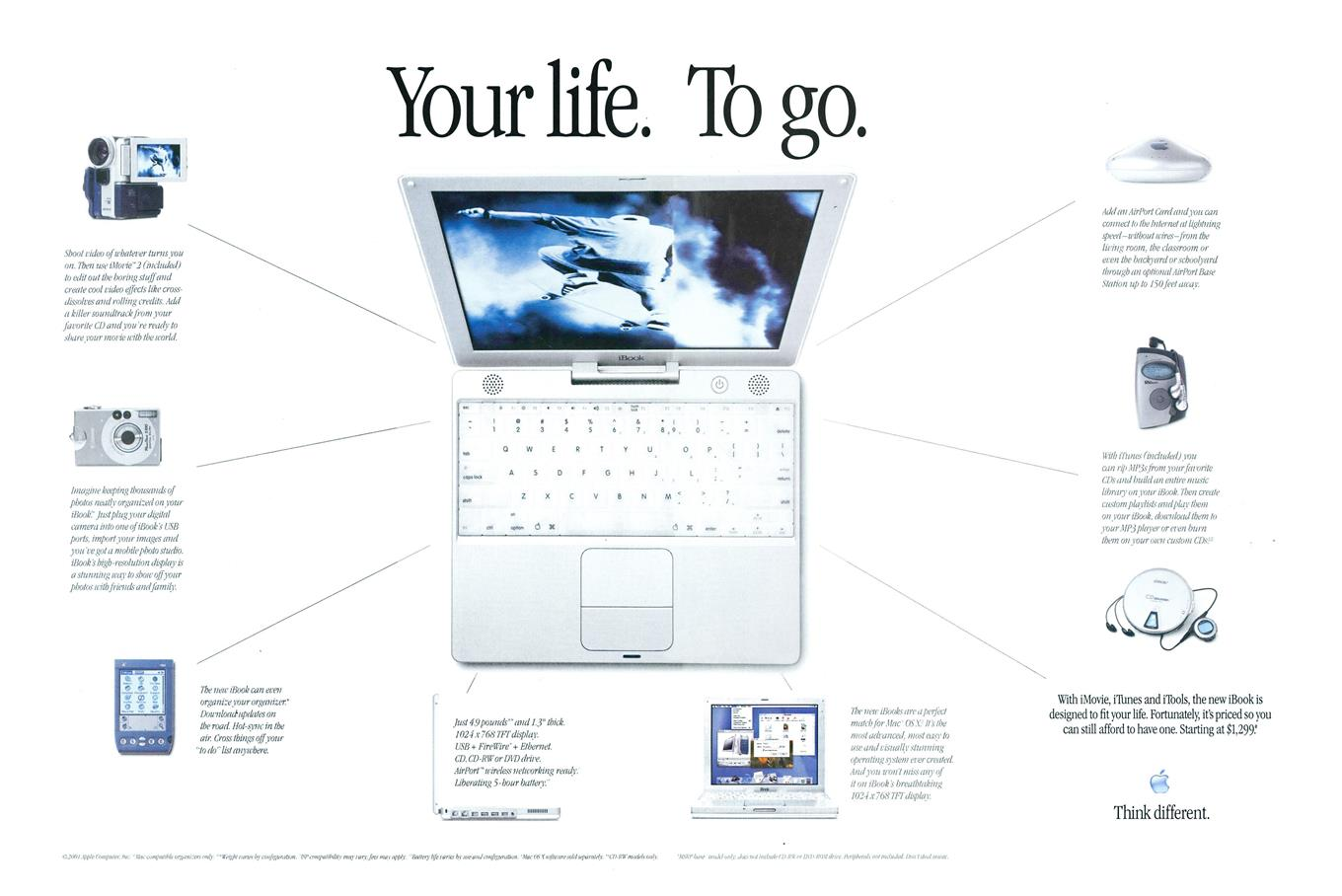 This July 2001 ad from Apple’s “Think Different” campaign demonstrates how the iBook is more than just a computer by listing its other uses: video editing, personal organization, photo storage, and so on. It sells a lifestyle, not a product. This type of exploration encourages the reader to think about how one product can impact every phase of life, which increases the likelihood that a consumer will relate to it on some level. 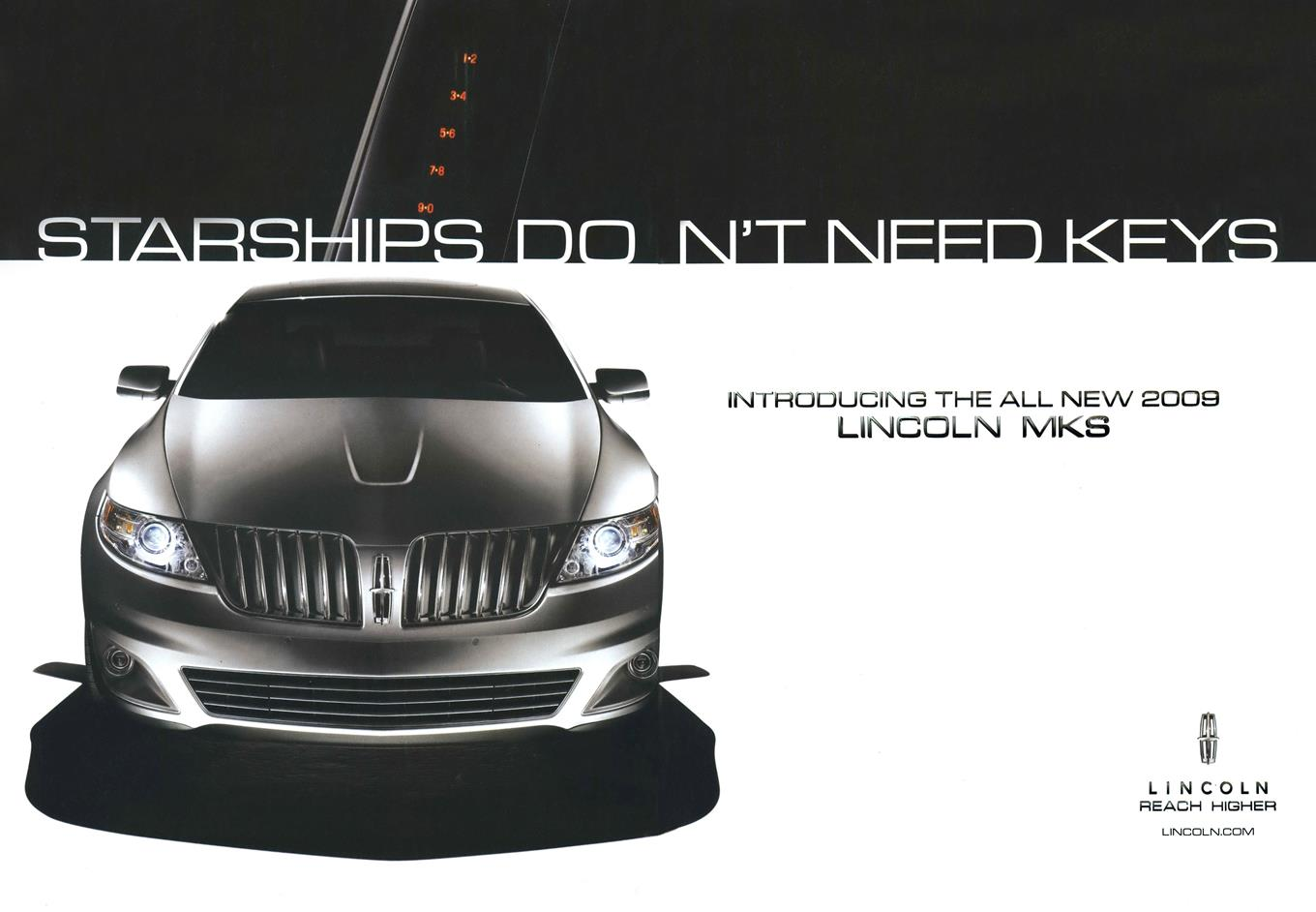 This minimalist ad for the Lincoln MKS from August 2008 doesn’t provide any explanation for its tagline, “Starships don’t need keys.” This leaves readers to consider the connection on their own, associating one car with the cutting-edge technology of space travel, regardless of whether it’s accurate. The power of suggestion can be just as compelling—if not more so—than a direct approach. 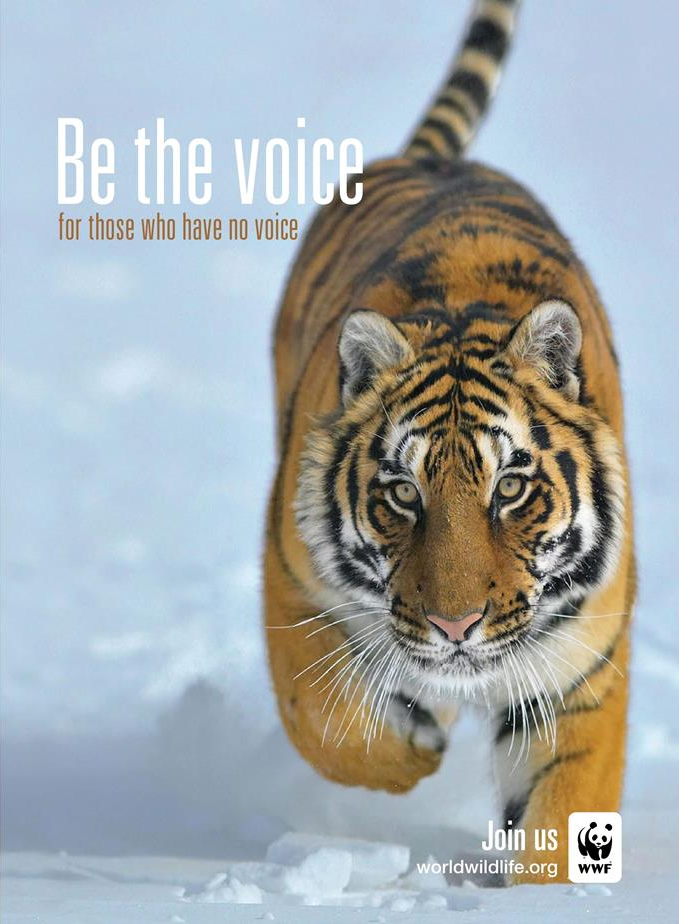 This World Wildlife Fund ad from February 2012 is short and to the point. It doesn’t need any defense or any explanation beyond the tagline, and the visual only serves to reinforce that. Sometimes the most memorable way to send a message is to be as direct as possible. Print advertising over the last 80 years has significantly changed in tone and style, but the point remains the same: Make your message count.