Last week, we published an in-depth study on how consumers interpret native advertising, and it wasn’t for the faint of heart. That’s not a cliché—you really shouldn’t read it if you work for a native ad studio and have a heart condition.

Since the report is a long read—2,339 words, three of which are “sponsored content stimulus”—I wanted to present the results in a format that’s a bit more digestible. Snackable, I dare say.[note]… If I want to hate myself when I read this again later.[/note] That’s right, it’s time for everyone’s favorite content format: Some Major Concept, in X Charts. Quartz would be so proud. 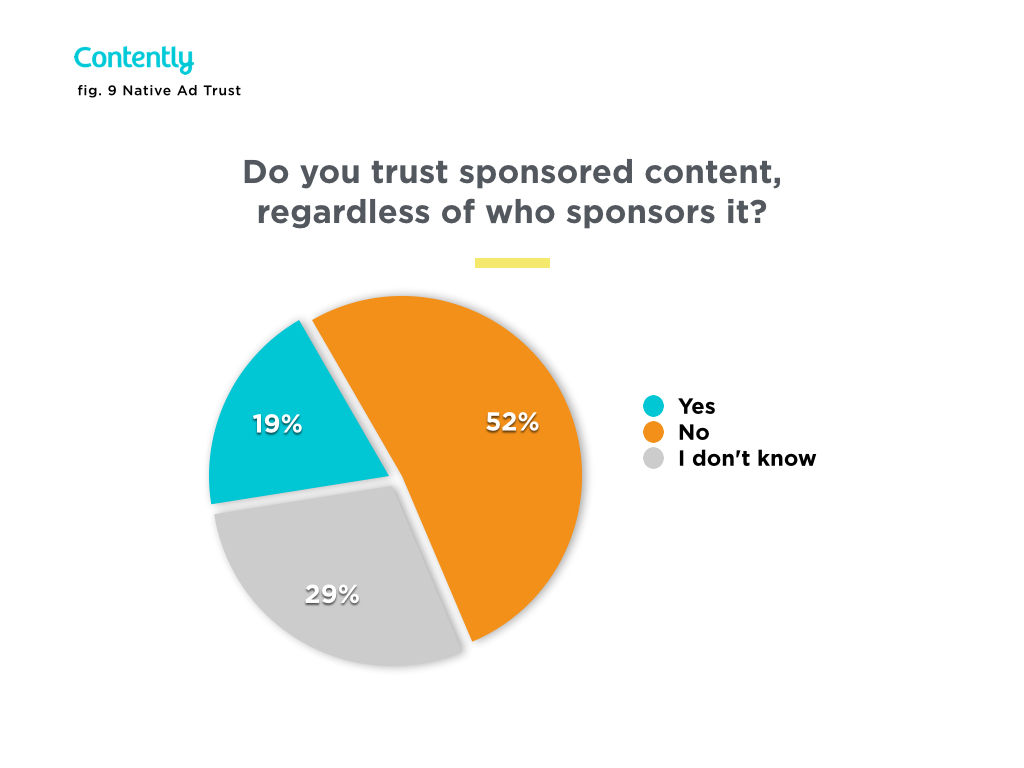 They also think it diminishes a news site’s credibility 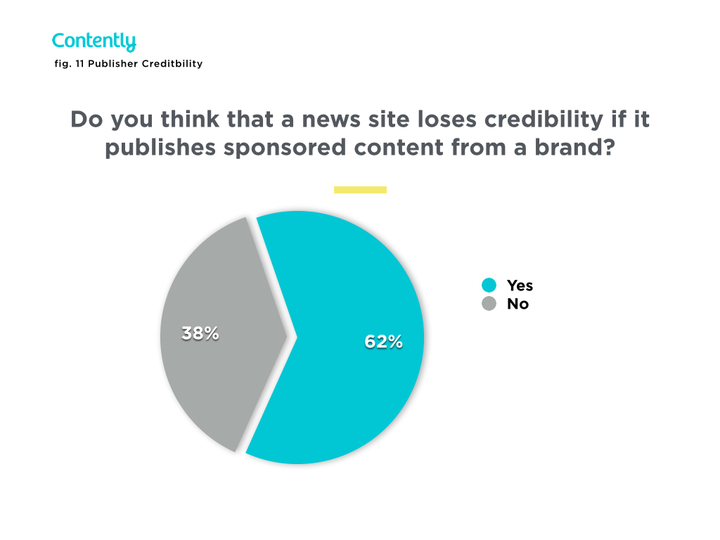 The party line for most publishers has been that sponsored content doesn’t diminish credibility as long as it’s clearly labeled. However, most consumers seem to disagree, with 62 percent claiming a news site loses credibility when it publishes sponsored content, an increase of three percentage points from our 2014 report. 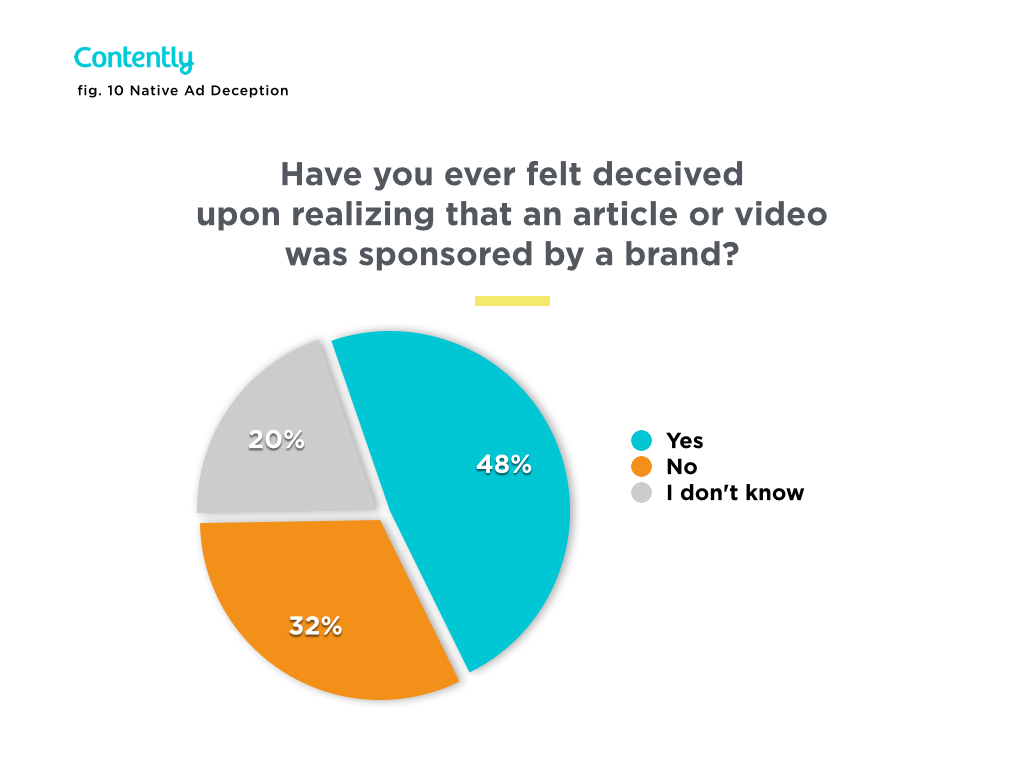 With the rise of ad blocking, publishers find themselves in a precarious place, forced to literally beg audiences to turn off their blockers. Strong relationships with loyal readers have never been more important, which makes it even worse that nearly half of respondents have felt deceived when they realized an article or video was sponsored by a brand.

Why have they felt deceived? The next two graphs may reveal the answer…

Most consumers interpret native ads as articles, not ads 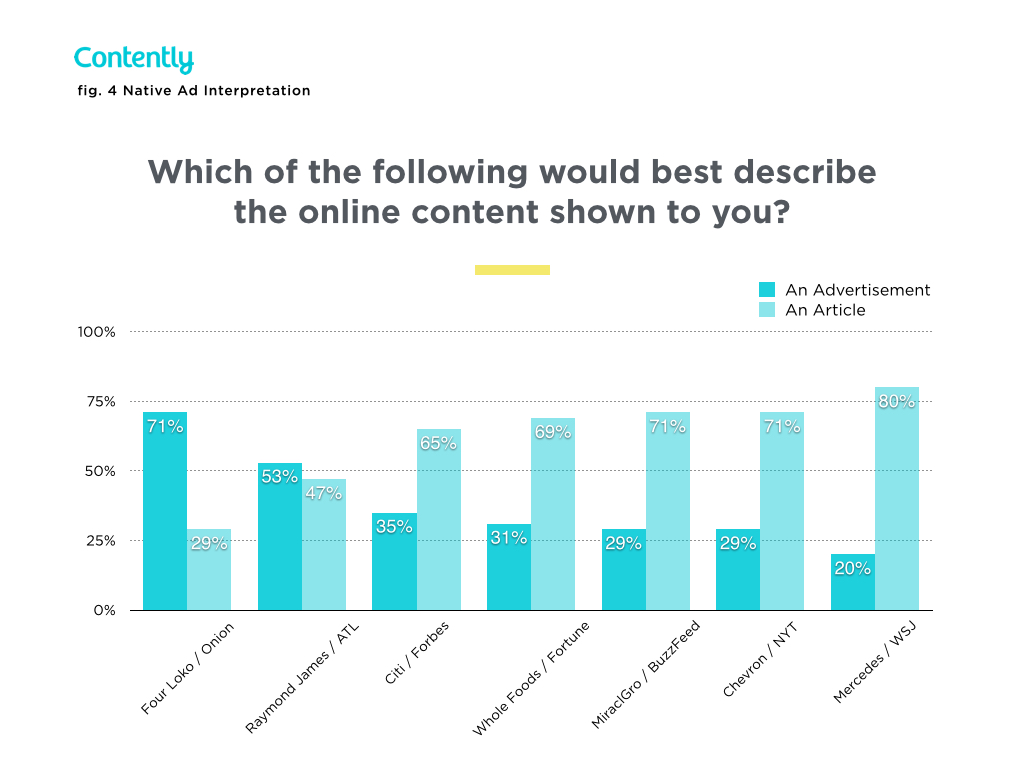 We conducted this study by exposing 509 consumers to one of six native ads from six different publishers. As a control, we showed one group this piece of editorial on Fortune.com, “5 Reasons Why It’s Great to Work at Whole Foods,” which was not sponsored by any brand.

The results were pretty surprising. In four of the six groups, most consumers identified the native ad as an article. That includes native ads on The Wall Street Journal (80 percent identified it as an article), The New York Times (71 percent), BuzzFeed (71 percent), and Forbes (65 percent). I think there are a few possible explanations for these results—and I went through them in detail in my original write-up—but regardless of the reasoning, there’s little doubt that consumers are confused by native ads.

They also struggle to identify the sponsor 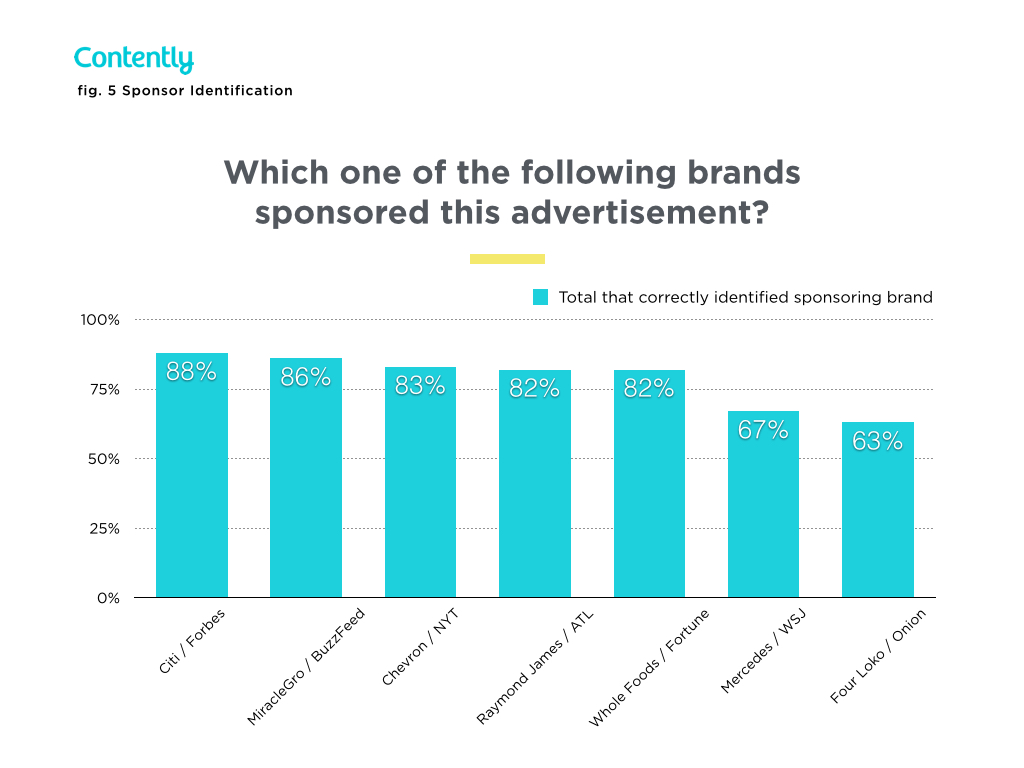 If a respondent identified a native ad as an ad, we asked a follow-up question: Who sponsored it? Their ability to answer that question varied greatly. Only 63 percent of those exposed to the native ad on The Onion were able to correctly identify Four Loko as the sponsor; The Wall Street Journal didn’t fare much better, since only 67 percent of respondents could point out Mercedes as the sponsor.

You have to ask, is it really worth it for a brand to spend six figures on a native ad campaign if a significant chunk of consumers won’t even realize that brand was the sponsor? Isn’t that the whole point?

There are serious disclosure and labeling issues at play, and it’s clear that native advertising still has a long way to go. But there are also reasons for optimism moving forward. You can dig in further by reading the full report here.