Is Instagram About to Become the Traffic-Driving Platform of CMOs’ Dreams?

If the social media world of 2010 was about connection, the 2015 version is about conversion. Over the past two years, Facebook, Twitter, LinkedIn and Pinterest have continued to introduce product updates that give brands and publishers the ability to drive traffic and conversions.

The notable holdout has long been Instagram, which has stuck to its rule that users can only post a single link to their account (in the bio), even as the platform has grown like gangbusters.

As a result, Instagram has become a quandary for brands and publishers alike: The platform is great for engagement and brand building, but it’s damn near impossible to drive conversions and revenue.

That appears to finally be changing.

Over the past few months, Instagram rolled out clickable ads, which drive users to external landing pages and content, on a limited basis with select partners. The widespread potential here seems huge. These clickable ads utilize the powerful targeting capabilities of Facebook Sponsored Posts, [note] Facebook owns Instagram #synergy [/note] which have become the favorite social ad format of marketers [note] 78 percent of social marketers are somewhat or very satisfied with Facebook ads, according to a new Forrester report, higher than any other social platform. [/note] and publishers attempting to efficiently drive additional traffic to their sites.

If that CPC holds, brands will absolutely jump on the Instagram ad bandwagon. The chart above certainly indicates they were eager to even before the introduction of clickable ads, and publishers like BuzzFeed and already use Facebook to drive additional traffic to certain stories would likely experiment with clickable ads as well when they’re opened up to the masses.

For the most part, brands and publishers have struggled to drive traffic from organic Instagram posts. Today, San Francisco-based startup Soldsie publicly launched Have2Have.It, which creates a direct path from Instagram to a page that mimics the look and feel of Instagram, where users can click through to read stories or even buy specific products. 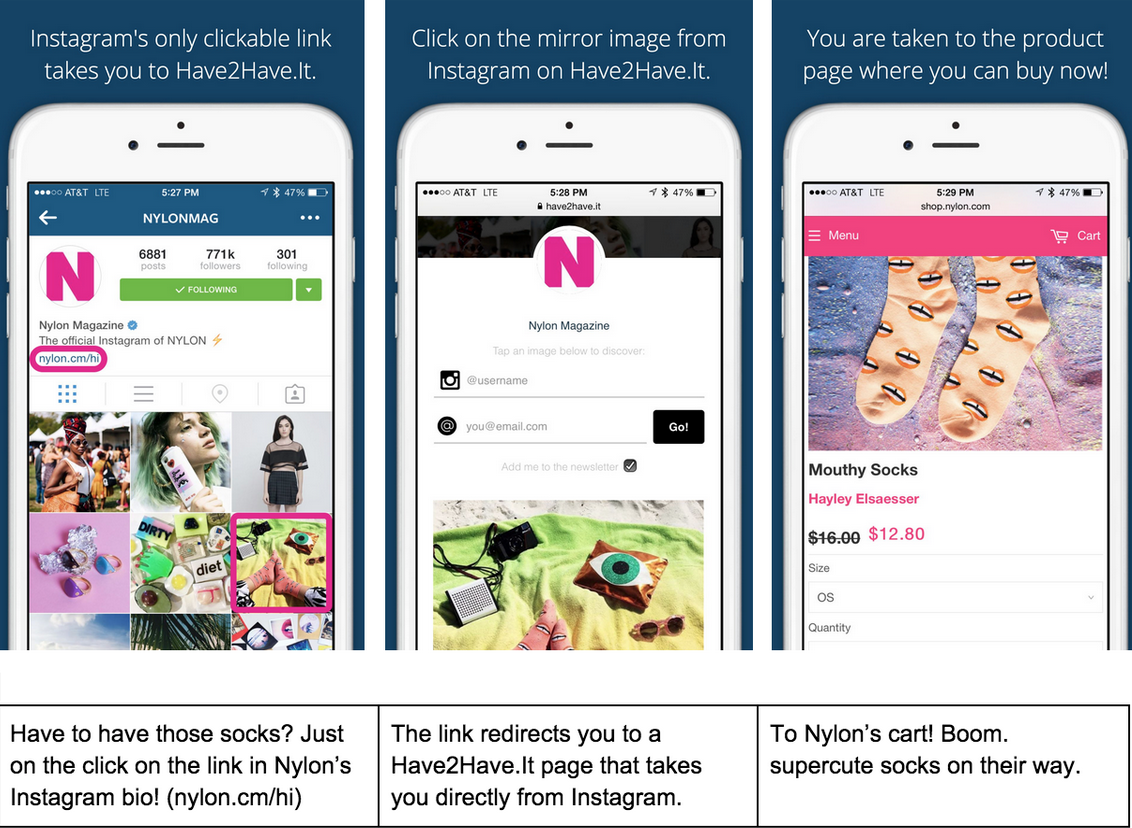 Early experimenters with the platform include Nylon Magazine, TechCrunch, and The New York Times. While this might seem like a hell of a lot to ask of consumers, it appears to be working so far. According to Katherine Martinez, Nylon Magazine’s Director of eCommerce, “Have2Have.It drives over 8,000 views per week and accounts for approximately 40 percent of our social media conversions.”

Those are significant figures, and indicate that solutions like Have2Have.It could become a way for publishers and brands to drive significant referral traffic from Instagram.

“[It] has helped us start to bridge the Instagram content-commerce gap,” she added. “If our customers like what they see, we get instant attributable sales feedback and are able to tailor our future posts accordingly.”

While Instagram’s protected place in the Facebook womb has allowed it to avoid concerns over monetization, it seems inevitable that it’ll follow the path of other social platforms and become a powerful driver of traffic and, in turn, revenue. Users may not love that change, but when that time comes, CMOs will finally be able to make a fortune off of filters. Who knows—Return on Valencia might even become a thing.