Want to know an unfortunate reality of the online publishing game? Without a great headline, even the most compelling stories can go unnoticed by the masses.

With so many links floating around on social media, the only way to break through is to craft a headline that makes people feel as if they need to stop whatever they’re doing and look at your story—instead of the seemingly infinite number of other things available for them to click on.

Fortunately, you don’t have to go it alone when it comes to creating killer headlines. There are plenty of tools on the market that use data science to help you construct the perfect headline—but which one should you choose? That answer depends a lot on what you’re trying to accomplish, and which method you prefer. But here are the five headline optimization tools we like best.

Microsoft, Bleacher Report, and NBC Universal all use Optimizely to get the most of their headlines. The company goes beyond A/B testing headlines by also including multivariate testing. This means you can test whether different combinations of images and headlines generate the best results—which is important when you consider that visuals are one of the main drivers of social sharing.

You can also alter your testing to optimize for a variety of goals, such as driving engagement, pageviews, click-through rates, conversions, or social media shares.

Recently, the company announced it is making a push into personalization that it hopes will allow customers to use first- and third-party data to deliver individualized experiences for readers. For publishers with diverse audiences, that’s a big deal. 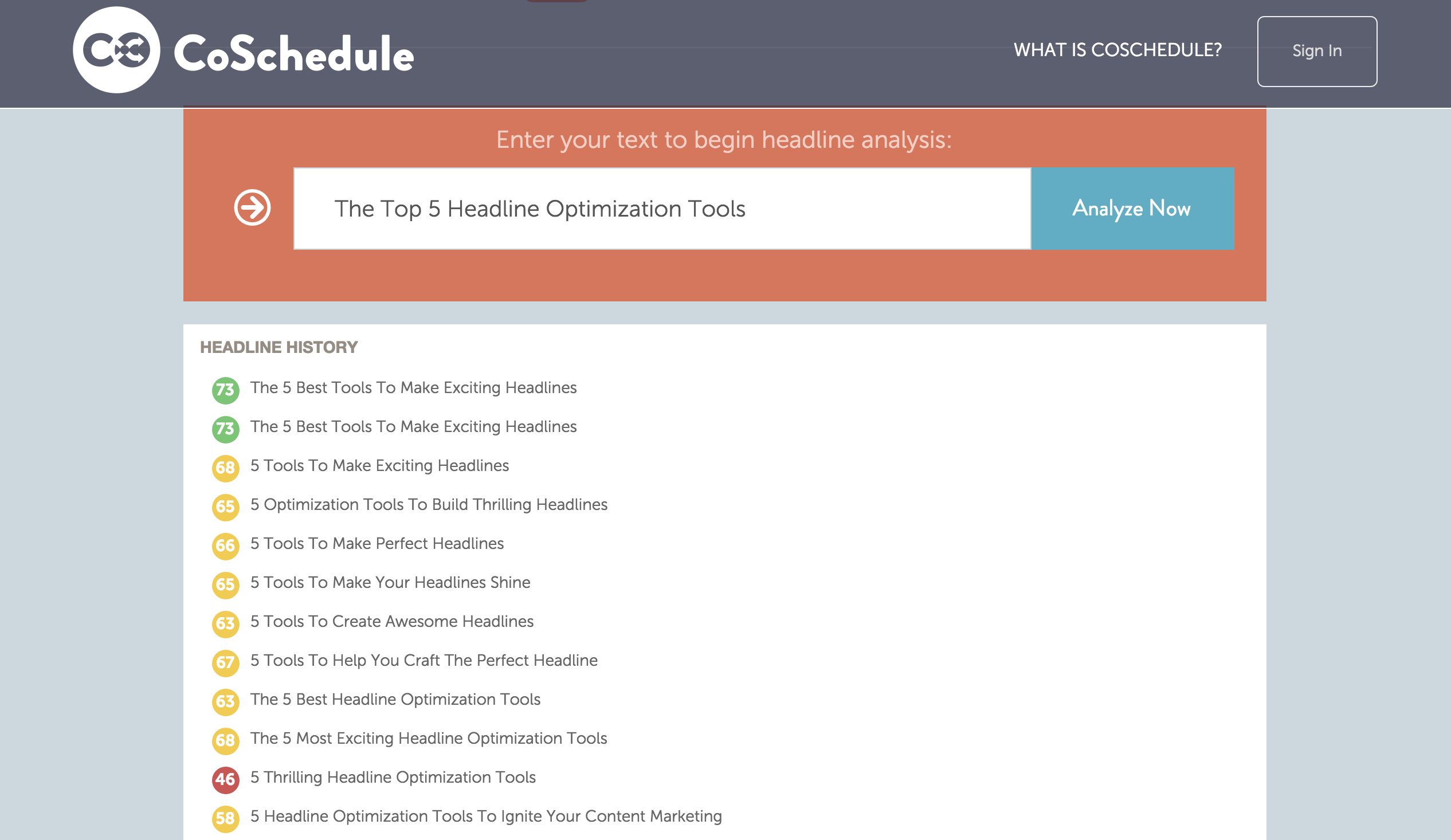 CoSchedule is a content marketing platform that companies can use to plan, create, and distribute content across their owned blogs and social media accounts. Though its editorial calendar-building tools are a paid service, the company also has a free headline analyzer tool that uses data analytics to determine the strength of the headline you are planning to use.

Based on data cultivated from the success of past headlines, CoSchedule gives the headline you’ve written a score between 1 and 100. The scores are based on how well you’ve mixed words that its internal algorithm deems emotional, powerful, common, and uncommon. It also makes sure that your headline isn’t too long, and shows how your headline will look as the subject of an email or as a Google search result.

The best part? Since the headline analyzer tools retains your past searches, you can keep plugging in new headlines to see whether they will give you a higher score.

(Editor’s note: CoSchedule’s headline analyzer is one of our edit team’s favorite tools. It freaking works.) 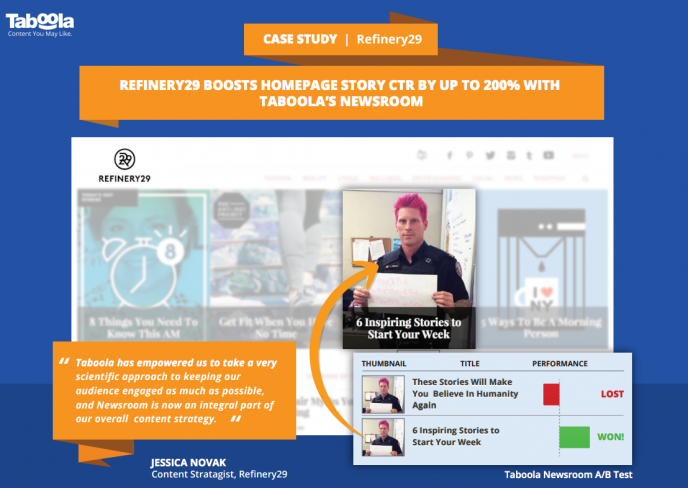 You might know Taboola from its ubiquitous content-recommendation boxes, but the company recently rolled out Taboola Newsroom to help publishers optimize their content offerings for the highest possible engagement.

The service, provided free to Taboola’s publisher partners, allows content creators to test headlines, thumbnails, and other creative elements in real-time against a baseline click-through rate generated by Taboola’s algorithms.

Using Newsroom, Refinery29 achieved a 45 percent increase in average click-through rate on its homepage, according to a Taboola case study. The incredibly popular lifestyle site is also using Newsroom’s analytics to test out its content strategy for various social media platforms.

With the huge amount of data it receives from its content recommendation service, Taboola has a unique weapon to help make informed suggestions about the headlines people are drawn to most. 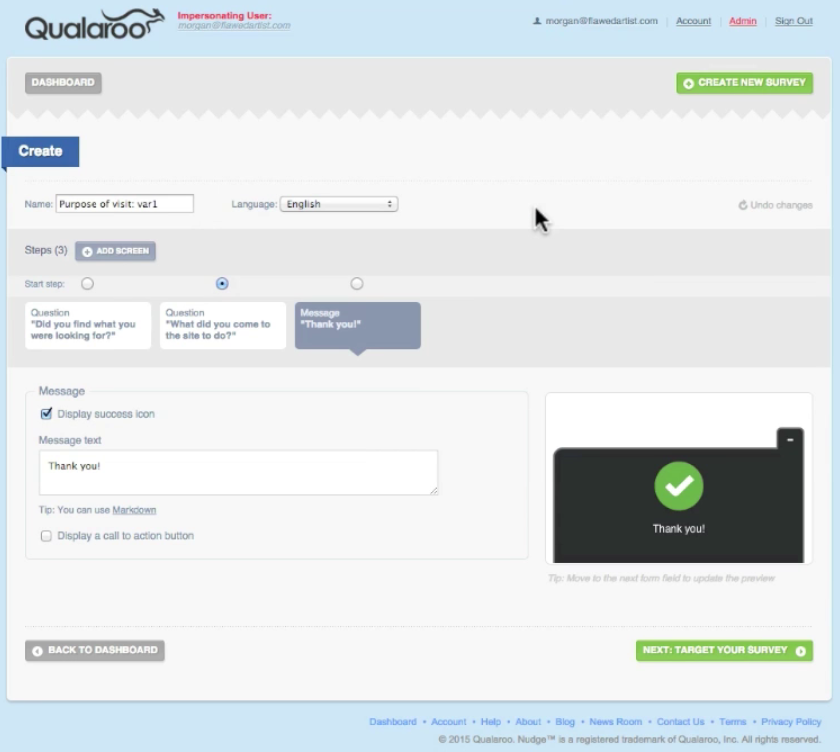 While other testing tools tell you which headlines your audience responds to most, Qualaroo takes the next step in providing some insight on why.

The service works by asking survey questions of users—like why they read one blog post instead of another—allowing content marketers and publishers to get to the bottom of what’s driving reader behavior.

And that’s critical. Unlike other services that simply rate the copy you’ve already written, Qualaroo’s feedback can help you craft more appealing headlines in the first place.

If you’re looking for more of a human touch, then Boost Media might be your best bet. Boost has a network of 1,000 designers and copywriters who develop on-demand creative assets—including headlines—whenever you need them.

But Boost isn’t afraid to use algorithms as well. Boost’s software will weed out the headlines and images that aren’t doing their job, and only makes you pay only the distribution that actually generates the engagement you’re looking for.

The platform also includes A/B and multivariate testing, and it allows companies to source their headline writing to people within a target demographic. In other words, you can make sure the headlines for your new line of kitchen tools are being written by actual gourmet enthusiasts.