The editors of This. occasionally swear in their nightly newsletter, and when they do, it’s a sign that you should sit up and pay attention. “It is so fucking worth it,” they’ll write. And by then, you’re practically compelled to click on whatever article they’re recommending.

This.cm (or @THISdotcm on Twitter) is an emerging social media website from Atlantic Media that launched this past November. On the site, people create a profile so they can share links to online content they care about—just like any other social network. Except on This., you can only post one link per day, so choose wisely. As it turns out, that selectivity makes all the difference. 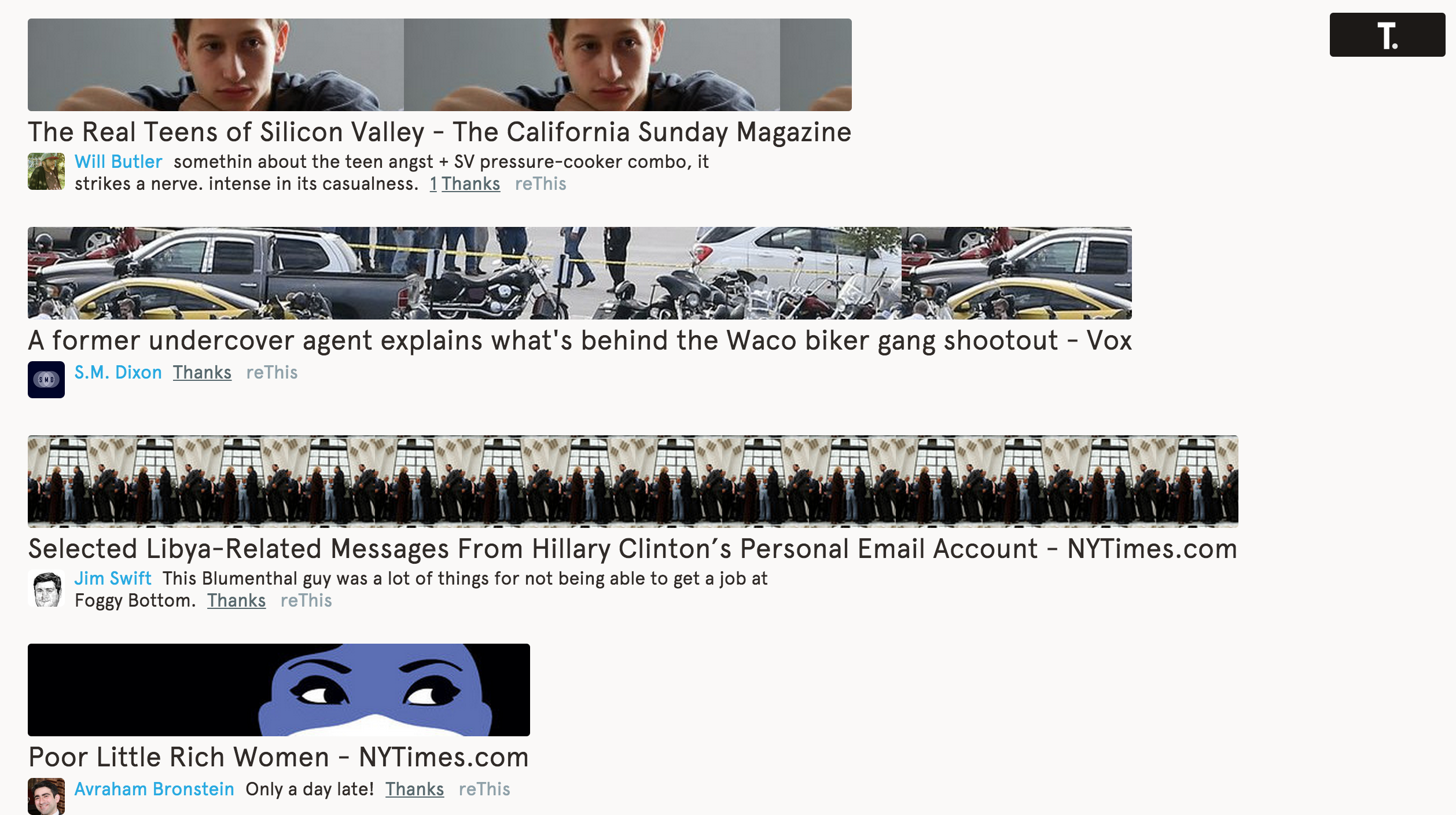 It’s all in the name. A month before founder and CEO Andrew Golis officially launched the beta for This., Kyle Chayka wrote a piece on Matter about how the terms #This and This^ had become so ubiquitous on Twitter and Tumblr, respectively:

Why is This so compelling online? Its etymology might provide a clue. The pronoun is a mixture of “the,” which denotes a specific thing, and the Old English “seo,” which is the imperative of the verb “to see.” Put those together, and you get a command: See that. Look here. Sit up and pay attention. This creates context and specificity in the limitless Internet, where so many things demand our attention at once.

And for anyone interested in digital publishing, context and specificity are two of the most important factors when it comes to building relationships with readers.

For now, This. is invite-only, which explains why the site only has a few thousand users—a New York Times trend story on the site from January 28 estimated its count at 4,500, and since then, they’ve pushed out a few batches of invites to bring that number above 9,500. But the audience is extremely engaged and seems to respond to this unique take on exclusivity.

There’s no social network quite like This. Curating content on the site demands passion and care. It is the “quality over quantity” social network, and as a result, it also feels the most personal. Unlike Facebook, where algorithms dominate the News Feed, and even Twitter, where 140-character brevity can quickly become overwhelming, This. slows down the Internet to a more digestible pace. It’s like Ello, touted as an anti-Facebook “social revolution,” except actually useful.

The interface’s layout is pretty minimal, and that’s part of the appeal. Each link gets a photo banner, headline, and a short description with a byline. With the recent launch of the This. Reader app, however, the site cements an aesthetic that makes it stand out from the crowd. Golis calls the app an “8 p.m. experience.” This. is for relaxing on the couch or in bed at the end of the day to find the best takes of what’s going on in the world. Just a few days after the launch, the app was named a favorite app of the week by Gizmodo. The nightly newsletter, in which the editors pick an eclectic and sharp mix of content posted to the site, and not just from major publications, has been my favorite post-work experience of the past few months. 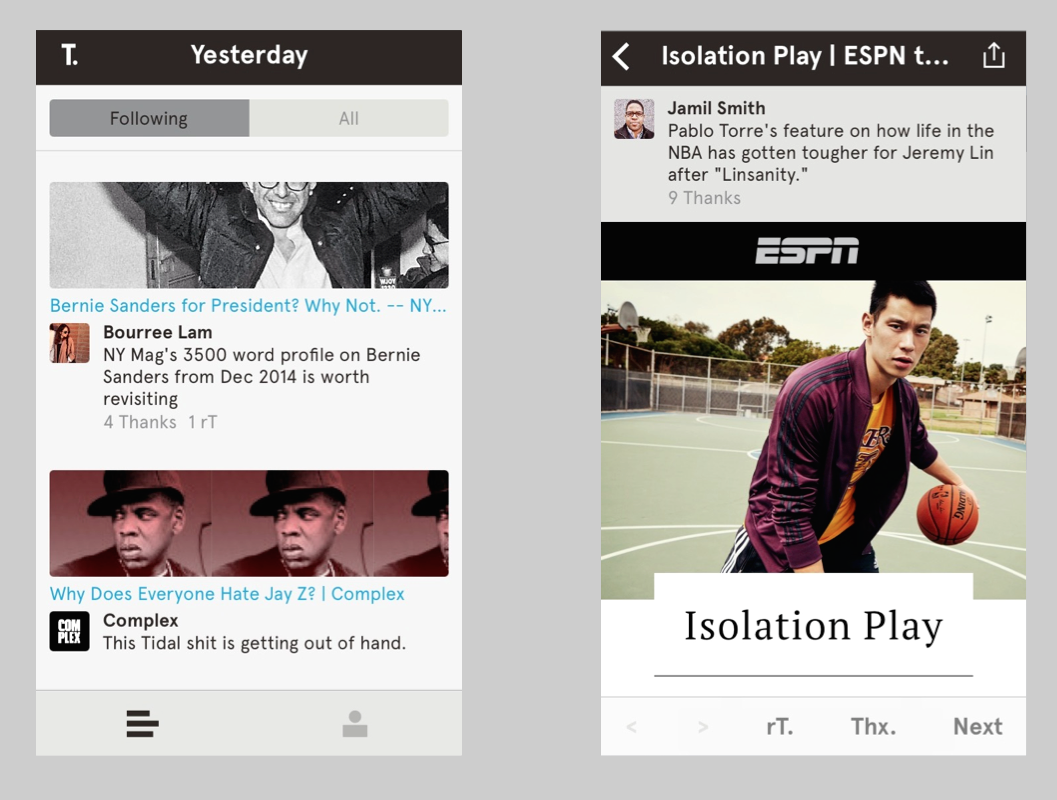 The appeal of This. is more than visual, though. The essential philosophy of the site asks: What do you truly care about today? Each day, you must judge what piece of the Internet you are going to throw your weight behind. Because of the need for selectivity, “regular users” are prompted to become as reliable for good content as the big-name brands and journalists. And, unlike Twitter and Facebook, This. tends not to play favorites beyond the few publications that have a presence on the site, like The Verge, the Times, and The Boston Globe. And even those accounts share links from other publishers.

Philosophically, This. is a place to give tribute to others, not to yourself. That’s been the biggest difference for me, an admittedly self-promotional monster on Twitter and Facebook. And if This. continues to grow, publishers will want to pay attention. Right now, the stereotypical approach to publishing and distributing content is to push out as much work as possible in as many places as you can manage, but that’s slowly evolving as metrics like time spent become more important than pageviews and aggregate social shares.

After its very considered and deliberate rollout, This. should prompt other publishers to at least rethink their editorial goals. If you’re not an “8 p.m. experience,” then what experience are you? And are you giving your users the best possible content? The content that not only stands out among your direct competitors, but among every other digital publisher as well?

After all, the goal for most publishers should be too cut through the noise, not add to it.