Museums, the Next Media Companies: Why The Met Built a 70-person Media Team

When the Metropolitan Museum of Art acquired Charles Le Brun’s 17th century painting “A Portrait of Everhard Jabach and Family” from a private English collector late last year, it made headlines in The New York Times. In the past, this would’ve been the end of the famous painting’s story—but things are a bit different nowadays at America’s largest art museum.

Today, anyone from the casual art fan to the most ardent restoration geek can get an in-depth look at the scrupulous process behind the painting’s preparation—all by visiting the Met’s website. Once there, visitors can learn about the piece’s long and damaged history (the painting was folded and tucked into a frame for 250 years). The restoration is a challenge that the museum might have once hidden from the public eye. Now, it wants to tell that tale.

“There’s a giant crease running through it,” said Sree Sreenivasan, chief digital officer at the Met. “The Met in another era would have run away from the crease. Instead, we’re embracing the crease.” Image via the Met’s Collection Online

So far, 18 blog posts by senior curators and a variety of videos have been released, detailing the painstaking restoration process underway to prepare the prized acquisition for display. You could almost call it viral restoration: They’ve racked up half a million views in the process.

The series is all part of a larger digital initiative that began in 2011, when the venerable institution began its lumbering journey into the digital age. Apps have been made, 3D printers have been creating interactive objects, and, according to Sreenivasan, the museum has been working closely with Oculus to develop a virtual reality experience for the museum.

But the transition is much more than just digital gadgetry: The Met is also transforming itself into a potent, full-fledged media company.

The Met as digital media startup

A big part of the Met’s digital transition has been the hiring of Sreenivasan, who joined the Met in 2013 as its chief digital officer. It was an unorthodox hiring. Sreenivasan had been a professor at the Columbia Graduate School of Journalism for 20 years before joining the Met; for all intents and purposes, he was a complete novice when it came to the museum world. And that’s exactly what the Met was looking for.

“They were looking for someone from the non-museum world and I was super qualified because I knew so little about art,” said Sreenivasan with a chuckle. He said that Tom Campbell, the director and CEO of the Met, had made it a priority to “get more of what we’re doing seen by the world.” Considering this is the same challenge that every media company grapples with every day, Sreenivasan’s hiring suddenly makes much more sense.

Along with Sreenivasan, the Met has also built a 70-person digital media team. The team is treated pretty much like a media-tech startup, except, perhaps, with less foosball tables in the office.

With a collection of over 2 million objects, the largest in the Western hemisphere, Sreenivasan and his team’s challenge isn’t finding stories worth telling—it’s figuring out how to tell them.

“We have so much that can get people excited,” said Sreenivasan. “You have to use the right tool at the right time getting people active on the right platform.”

In other words, a couple of company blogs and an email list isn’t enough to compete in our media-saturated landscape. To succeed, museums need to know what kind of content people respond to, and also how to get that content seen in crowded social feeds.

Video has been a big part of that push, as has more experimental initiatives such as the Met’s recent Artist Project. The series asks 100 of the world’s most influential contemporary artists to pick their favorite item(s) at the Met and discuss how they inspired their life and work. The series is being told on a slick microsite and is divided into seasons akin to a television show. So far, only season one, which features 20 artists, has been released.

The initiative is the latest “big project” that the team tackles every three years. Sreenivasan said that the idea to release the content 20 artists at a time is something new for the team, a move meant to capitalize on the increasing popularity of “binge-watching.” He hopes the schedule will create excitement along the lines of a new season of House of Cards, instead of a more typical one-time dump or gradual, one-at-a-time trickle.

This experimental distribution strategy is just one among many at the Met, where content distribution is just as important, if not more, than content creation. Facebook in particular has been a big push, as have highly specialized email lists—the Met sent out 55 billion emails just last year. The digital team is also focused on the digitization of the Met’s object collection. Images of 400,000 of the objects have been made publicly available for non-commercial use, as the team hopes that people “use their stuff,” as Sreenivasan put it.

“Every item has a story,” said Sreenivasan. “We need to get those stories out there. Let’s just tell people about it instead of always trying to create new things. Let’s think about resurfacing, resharing, and reposting our content.”

Of course, the Met isn’t the only museum flirting with the idea of becoming a media company. In fact, the newly reopened Cooper Hewitt in New York was designed as one from the ground up.

The Atlantic described the contemporary and historical design museum, which spent $91 million and three years on its renovation, as having “transformed into an organization not unlike Wikipedia, Pinterest, or, for that matter, The Atlantic: Somewhere between a media and a tech firm, it is a Thing That Puts Stuff on the Internet.”

In other words, Cooper Hewitt, one of 19 museums in the Smithsonian Institute’s network, has become a digital resource as well as a physical one. Visitors that could never make it to the physical space can learn as much if not more online, thanks to the museum’s virtual hub. 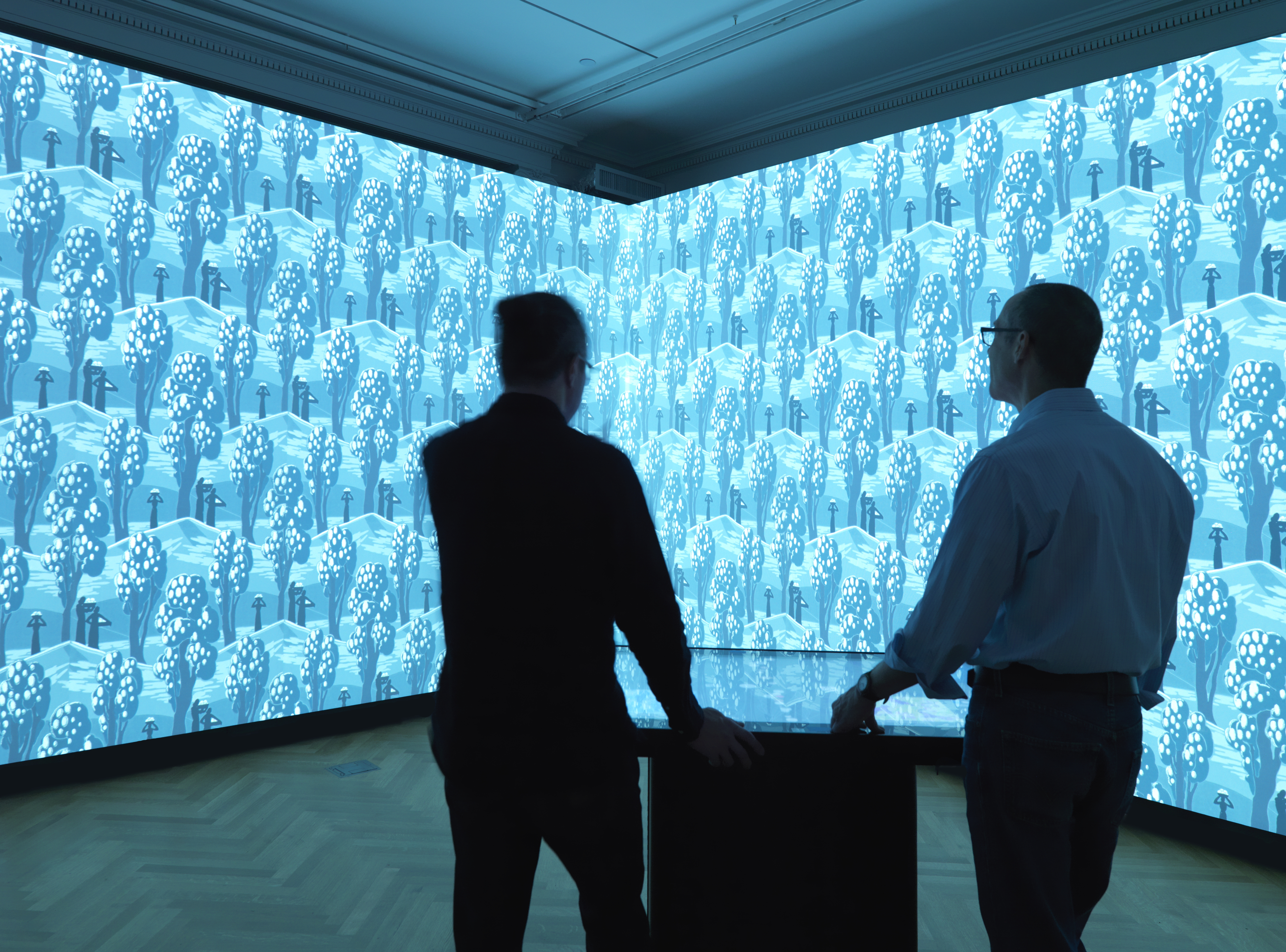 Sebastian Chan, director of digital and emerging technologies at Cooper Hewitt, has been one of the leading minds in museums’ transition into the digital age, which he has been blogging about on Fresh & New since 2005. Like Sreenivasan, Chan comes from a media background: He started his career as a music journalist and DJ before applying his experience to the museum world.

Chan said that if he’d been asked five years earlier whether museums should become media companies, he would have answered “yes.” But now he sings a slightly different tune. Standing out among the abundance of content already available on the Internet may be something of a quixotic quest for many resource-strapped museums.

Instead, he believes that many museums’ goal should be high-quality curation, rather than creation.

“No one is good at [curation],” said Chan. “Nobody’s good at that. But that’s where museums have a lot of experience, in creating curated sets of things. When I go see an exhibit, I’m not doing a search—I’m browsing. The value of curated sets is increasing, and I think there’s a real resurgence in that.”

Since the museum’s reopening, all of Cooper Hewitt’s objects, both on display and not, live permanently on the web on a Wikipedia-esque database—and their innovative API allows for other platforms, websites, and users to interact easily with the object.

“A lot of museums think about putting stuff on the web, but they don’t pay much attention to the architecture of the web,” said Chan. “[The Collection Database] is a push back on the rush and the speed of things. We don’t need 50,000 people clicking on this today; we’re happy if 50,000 people find the value of it over 50 years.”

Still, Chan is quick to note that he doesn’t believe that one model will work for every museum. “I would suggest that most museums should be pursuing a route where whatever they do is achieving their mission, and also throws off the right sort of exhaust—and that exhaust can get soaked up into other things.”

He likens his exhaust metaphor to publishing platform Medium: He said that museums shouldn’t be the ones creating these kind of platforms, but should be sure that all of their content can be re-purposed for Medium.

“There’s a lot of value that is being created at a museum daily—but sometimes it just evaporates,” said Chan. Without understanding the web’s architecture, and their place within it, museums’ valuable content can often go to waste.

Overall, Chan believes that, despite the uncertainty around the museum world, many have begun to understand what “digital” really means. “Going digital” is more than just creating a website and a couple of blogs—it requires a fundamental reimagining of how a museum should operate in our digital world, whether the museum is a storied institution like the Met or a smaller, newer player like Cooper Hewitt.