Story Hackers: How the Hottest Startups in Silicon Valley Are Using Content to Fuel Their Growth

When people look at Silicon Valley, they probably associate startups with billion-dollar valuations, whimsical company t-shirts, office foosball tables, and technology products. And to some extent, these tropes ring true, which makes it easy to lump together tech companies under an umbrella of stereotypes.

But beneath the surface, many of these startups have unique stories worth sharing with their customers. What’s the appeal? Original media assets help startups gain the exposure, traffic, and trust they need to ensure a steady trajectory of growth. In other words, content marketing can get a startup out of the blocks—and on the track to growth—fast.

If you lined up Uber, Airbnb, and Buffer, they’d all have one thing in common: They’ve fueled their growth with compelling content.

At first glance, it might seem odd for Uber to invest in a print magazine—until you understand just how important drivers are to the company’s culture.

In March, Uber launched Momentum specifically for its 150,000 drivers. Since the company expanded to 210 new cities last year and is currently adding 50,000 new drivers per month, those workers can now learn about Uber’s new markets, read about some of the company’s very first drivers, and learn how to stay healthy while working on the road.

Travis Kalanick, Uber’s co-founder and CEO, once told Fortune, “In the beginning, (Uber) was a lifestyle company.” Though Uber has since been referred to as everything from the “future of logistics” to “the family chauffeur,” its focus on lifestyle has remained consistent.

Since Uber drivers come from all walks of life, the company has the chance to tell some incredible stories just by looking within and profiling its employees and satisfied customers. Take a video like, “Why uberX Is so Popular in Australia,” for example, which follows a freelance CEO, a radio personality, and a model as the trio travels around Sydney in car driven by an uberX driver who’s working toward financing his upcoming wedding.

In addition to the print magazine, Uber has made video a priority. Its YouTube channel is brimming with creative content that’s split in categories like The Uber Experience, Spotlight on Uber Cities, and Behind the Wheel. Clips profile driver partners, demonstrate value through interviews with global users, and showcase corporate social responsibility efforts. They’re also used to get potential customers interested in the service, which is now worth an estimated $40 billion.

One element that sets Uber apart from other startups is its appeal to celebrities, who can use the premium service as an alternative to limos and cabs. The company has taken advantage of this unique position by teaming with celebrities for its videos. For instance, Uber recently documented the adventure that ensued when impromptu uberX driver and world-renowned musician Deadmau5 picked up Toronto passengers in his McLaren.

These tales are helping Uber connect with new customers and stay relevant with existing customers. After all, the relationship between a taxi driver and a passenger is very distinct; both parties have to share a small space for a short amount of time. To call attention to that in a positive way requires a commitment to content. And Uber’s content team has shown the ability to use these uncommon relationships to tell personal stories, one fare at a time.

Like Uber, Airbnb, the hospitality service that helps travelers find rooms from local hosts, has an insanely large audience of people that come from all over the world. Plenty of people have stories about their homes, or where they stayed on vacation, so it wasn’t a surprise when Airbnb started using those stories of adventure and hospitality to market its services.

The company’s content strategy might best be described as “more is more.” In the past three years alone, it has created a series of neighborhood guides; released close to a dozen Economic Impact Studies displaying its positive effect on cities; created a groundbreaking crowdsourced Vine; released several short films; and launched Pineapple, a quarterly print magazine targeting both hosts and guests.

Pineapple is designed in-house in the style of a traditional print magazine, full of glossy photo spreads that highlight vibrant places people visit around the world. But to be clear, it’s not just a blatant marketing brochure that runs fluff pieces about the best places to stay in each city. As Christopher Lukezic, the magazine’s publisher, told Fipp: “This isn’t a magazine about homes, it’s about the connections that our community makes in the environments where they live or travel. For us, print was the perfect medium to tell these stories.”

The latest issue of Pineapple includes longform stories that look at London, Seoul, and San Francisco. Putting together a print publication that runs 128 pages required an immense amount of collaboration. “We… enlisted excellent writers, photographers and illustrators, all very local to each city,” Lukezic added. “The process has brought together people from different departments within Airbnb, from the photo, video and design teams to those working on social policy.” 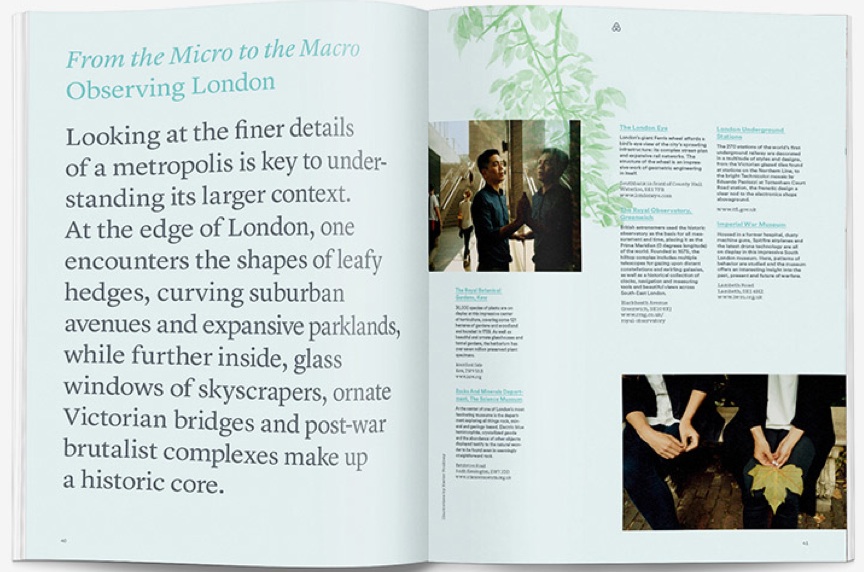 Besides Pineapple, Airbnb also runs Stories, a microsite that profiles hosts and travelers with video profiles from within the community, going in-depth to reveal motivations for why certain people have opened up their homes or, conversely, decided to uproot their lives and travel the world with Airbnb.

Clearly, there is a lot of interest on both sides of the company’s business model. A recent Barclays research report predicts Airbnb could be booking 129 million room-nights per year by 2016, a mere eight years after the service launched. People will always want to travel and explore new areas, and as long as Airbnb is dedicated to connecting hosts and sellers, there will be plenty more stories to tell.

A buffer for connection

A broad variety of storytelling has served Airbnb well, but are there benefits to taking a more contained approach? Buffer, startup that helps people use social media more effectively, is proving there are.

The social media company only has 29 employees, but now has over 2 million registered users. With such a small team, Buffer’s chief customer acquisition methods are blogging, video, social media, and “excellent customer support.”

Buffer differentiates itself from other content marketers by producing videos that adopt a relatable, laid-back style. In part, that’s out of necessity. The company’s use of employee-generated content allows it to skirt geographical constraints. A video might consist of a one-on-one conversation about business transparency, one of Buffer’s core values. Or it might feature social marketing tips filmed inside a team member’s home.

Because Buffer ranks substance and a chummy tone above upscale production quality, there’s an added gain: The company’s hustle and passion shines through.

“I think that enthusiasm makes a difference,” said Courtney Seiter, Buffer’s head of content marketing. “[Our informality] feels like a good match to the personal attention that we try to show our audience on social media and on the blog, where we hope they get to know Buffer not as a company, but as a team of individuals.”

Buffer also gives old evergreen posts new life by promoting them on Facebook and Twitter. When the startup asked new users how they heard about the company, between 30 and 40 percent of respondents pointed to a Buffer blog post. And according to Seiter, 8,686 of Buffer’s signups from the last month came directly from the blog. 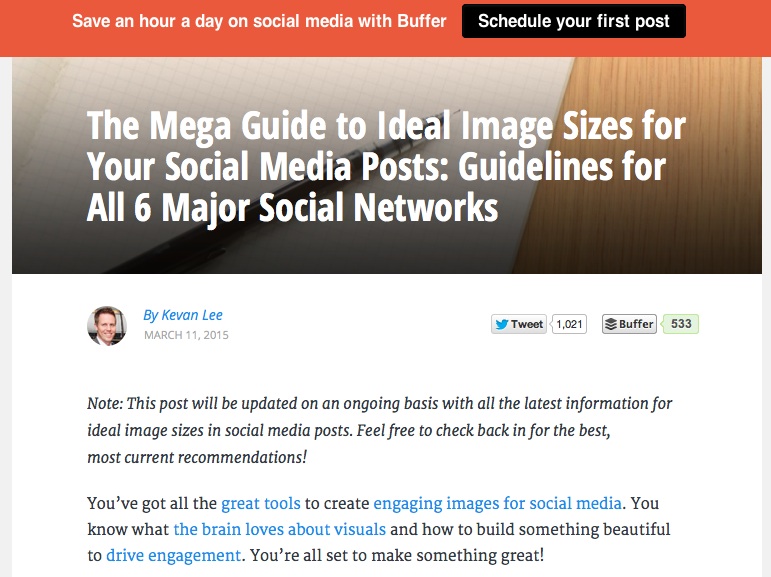 In the future, Buffer plans to focus on producing more video and possibly a podcast. Whatever they do, remember that you don’t need a team of hundreds or thousands to create meaningful content. As long as you focus on building a following with high quality content that targets an audience in a meaningful way, customers will take notice.

“Our North Star is to ask, ‘Would the reader email this article to someone, like their friend or coworker?'” Seiter said. “If it doesn’t provide that level of quality in terms of educational value or actionable tactics and strategies, we don’t publish it until it does.”

As the publishing operations at Uber, Airbnb, and Buffer show, content marketing is helping Silicon Valley brands both large and small take their businesses to the next level. Whether the product is a taxi-service app or a social media tool, there’s a good chance the company that built the product has a story to tell. And making the conscious effort to tell those stories with owned media properties is how smart companies are building long-lasting relationships with consumers.

Startups out West may be known for being callow, but as consumers get to know them from the inside and hear their respective stories, that’s all going to change for good.