What would you say if you had to guess the most shared site on Facebook? BuzzFeed? The Huffington Post? Fox News?

Surprisingly, the correct answer is PlayBuzz, an Israel-based quiz platform, that, seemingly out of nowhere, has built itself into one of the most well-trafficked websites on the Internet. And now, following in the footsteps of BuzzFeed, Upworthy, and other publishers that have quickly ascended the viral charts in recent years, PlayBuzz is planning to capitalize on its massive audience with sponsored content.

A few weeks after receiving a $16-million round of funding, the company is now beta testing a self-serve native advertising product that will allow brands to create their own PlayBuzz quizzes.

CEO Shaul Olmert explained that the new offering will give advertisers access to native advertising’s relatively high engagement rates without requiring them to give up the scale and ease of use they enjoy running programmatic display campaigns. According to a report from last year, mobile native ads had an engagement rate of 14 percent, compared to 9.8 percent for standard display.

“Native is very labor-intensive, and campaigns are limited in scale … but the engagement is very high, and the prices are very high,” said Olmert, whose father, Ehud, previously served as Israel’s prime minister. “On the other hand, programmatic is the exact opposite … it’s completely scalable, but it creates very low engagement and it’s sold for very low prices. We’re trying to marry the best of both worlds.”

More than 80 million people visit PlayBuzz each month. If you’re not one of them, think of the site as a DIY BuzzFeed, where amateur and professional content creators can make their own listicles or quizzes, which can then be shared on social media and embedded elsewhere.

While the content creation tools are free for anyone to use, brands that pay for the native advertising product will have additional customization options and access to data insights ranging from how much time people spend on each post to which quiz results lead to the highest share rates. Though the product is still under development, a spokesperson said PlayBuzz is considering offering advertising customers the ability to feature links to their products throughout posts and the option to toggle color schemes.

PlayBuzz will also give advertisers distribution through placements on its homepage, article pages, and in content recommendation slots underneath quizzes embedded on other websites. Olmert claimed that roughly 40,000 news websites have posted native PlayBuzz content.

Here’s one of the sponsored quizzes that’s currently being tested by Unilever: 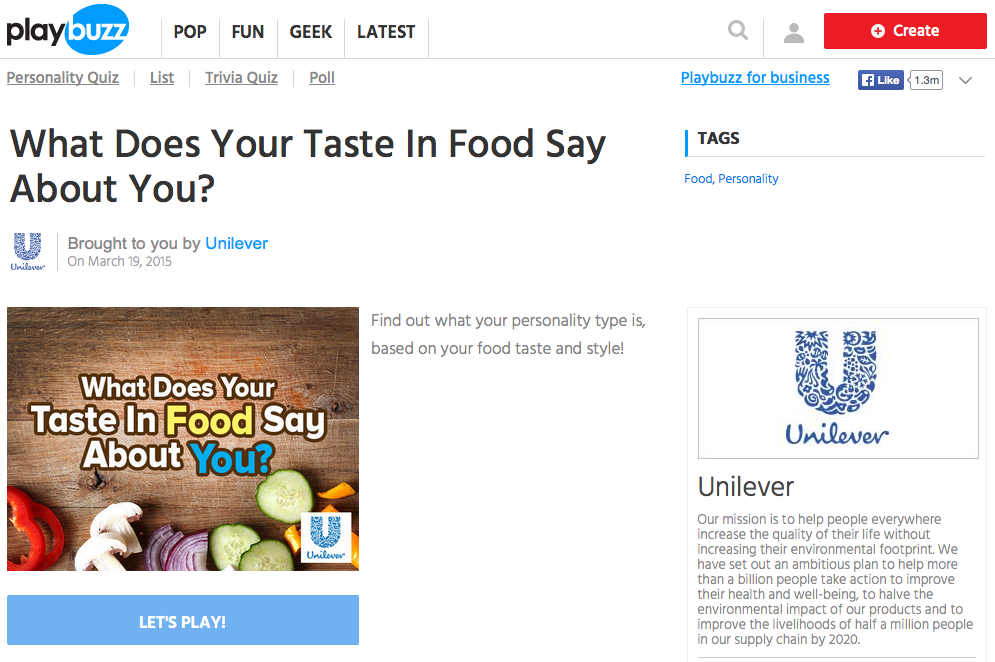 The company is working closely with advertisers to help them create engaging quizzes and lists where the branding is clear to the reader without being intrusive. Eventually, Olmert expects brands to be familiar enough with best practices on the platform to create content on their own.

“We have to make sure that people are getting access to a high-quality item that has good content in it, creates good engagement, and at the same time, the attachment between the experience and the brand or product it’s trying to promote is very clear,” he said. “It has to be a win-win, otherwise it’s a lose-lose.”

Matt Heindl, senior director of social media marketing at Razorfish, believes the amount of branding PlayBuzz allows advertisers to use in sponsored posts will be one of the keys to making the product an appealing alternative to BuzzFeed. While BuzzFeed takes care to prevent an advertising message from making its posts less entertaining, the content is not always aligned with the sponsor’s products, and the sponsor’s name and logo are not always as prominent as Heindl would like.

If PlayBuzz can put its brands front and center at an affordable price, it may be able to steal some thunder from the BuzzFeed revenue machine.

“The BuzzFeed listicles and quizzes aren’t cheap, and the amount of branding BuzzFeed allows is not huge. ” Heindl said. “Shit, I mean, to even work with BuzzFeed, they won’t even look at you for less than $100K these days. So I could see these guys actually having a go at it.”

PlayBuzz might also appeal to advertisers because it actually generates stronger engagement than BuzzFeed. According to NewsWhip’s analysis of top publishers on Facebook for the month of January, a little more than 70 percent of PlayBuzz’s Facebook interactions were shares or comments, the two strongest indicators of reader engagement. By comparison, a majority of BuzzFeed’s interactions were likes, which take relatively little effort on behalf of a user and do not do as much to promote a piece of content to that user’s friends.

What this tells us is that even though PlayBuzz’s brand is relatively unknown to the public, the people who spend time with its quizzes and lists are taking the time to interact. In order for PlayBuzz to fully capitalize on this user engagement, it will have to make sure its site doesn’t become oversaturated with advertising, an issue that could turn off its readers.

Mekanism president Jason Harris thinks the company will need to be more vigilante about curating the content that goes on its site. According to a Business Insider story on PlayBuzz’s recent round of funding, only 2 percent of quizzes and lists are created by the company’s in-house editorial team. As a result of all this user-generated content, PlayBuzz could find itself in a position where brands are uncomfortable about the prospect of advertising next to posts that are risqué or in poor taste.

For example, when I visited PlayBuzz while writing this article, the quiz “Can We Guess How You Like To Get High?” by a user named stoned girls was featured prominently on the homepage. (I got “any way you can,” which strikes me as something of a cop-out, if we’re being honest). 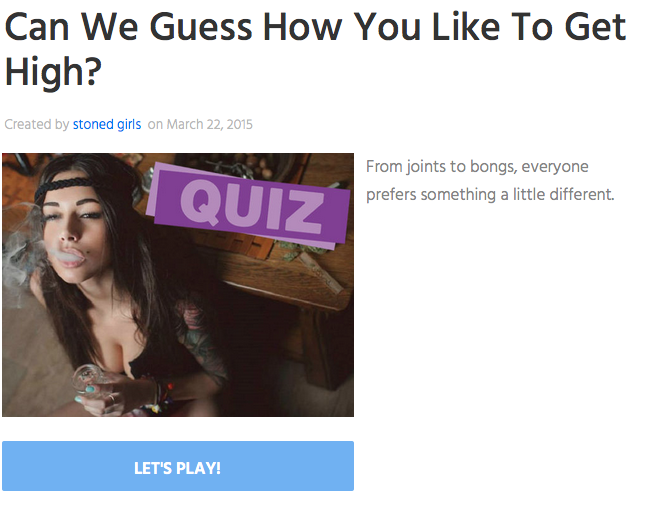 “Oftentimes the challenge with something so reliant on user generated content is creating a safe space that advertisers want to play in,” Harris said. “Will it be a brand-friendly environment or a place where everyone throws up whatever they want and there’s no tone or point of view from the media property?”

However, Digitas SVP of Content Strategy and Marketing George Hammer believes the idea of brand safety is becoming less of a concern for marketers these days due to the rise of Facebook, where brands have no control over what content is displayed above and below their ads in the News Feed.

The bigger issue may be that the PlayBuzz brand doesn’t mean much to consumers, and many of the people who wind up taking one of its quizzes might not know the name of the site that produced it. As a result, brands won’t benefit from a halo effect of advertising with PlayBuzz the way they do when they pay to borrow some of BuzzFeed’s cool.

Nonetheless, advertising with the site could be a smart idea for a brand that already has name recognition but wants to build a reputation of presenting consumers with fun, engaging content.

“What I think is smart about PlayBuzz is that no matter how much we want to think we’ve evolved as a people, the number one thing we like to do is consume funny content and appear to our friends that we are funny ourselves,” Hammer said. “I think they’re tapping into that nature of humans to say, ‘Oh, look, I can make this stuff too. I’m creating and I have a point of view.’ Almost what YouTube did for the video, PlayBuzz is trying to do for the BuzzFeed list.”