5 Brands That Are Killing It on Spotify

If there was one constant at SXSW this week, it was the line to the Spotify house that stretched around the block.

Considering that SXSW is in many ways a mash-up of music and technology, it makes sense that music streaming service Spotify went all out at this year’s festival. The company hosted big-name music acts like Run the Jewels and Joey Bada$$ at its Spotify house stage and worked with build-your-own website company Squarespace to pair musicians with visual artists to create live, audiovisual art.

The SXSW events were all part of a larger effort to continue growing its roster of major advertisers—a push that seems to be working.

Digiday reports that brands are increasingly jumping on the opportunity to place their messages between the favorite tunes of the roughly 45 million people who use the company’s free service each month. (Spotify’s 15 million paid subscribers get to use the platform ad-free.)

So far, most brands are running simple audio ads that are no different from the radio commercials of yore. But there are others that are getting a bit more creative in tailoring their advertising to the service’s idiosyncrasies.

The sportswear manufacturer is the sponsor of what may be the coolest branded Spotify app yet: Reebok FitList.

The app smartly leverages the connection between music and exercise by providing people with playlists made up of the best songs for activities like running, yoga, and dancing—all voted on by people who use the app.

Reebok also got some of the athletes it sponsors to pitch in with their favorite workout music. I’m particularly partial to Eli Manning’s conditioning playlist, which features the Rolling Stones, Neil Young, and Hank Williams Jr. (Then again, given Eli’s penchant for pranks, this could just be misdirection—Eli always struck us as a guy who works out exclusively to Katy Perry and Destiny’s Child.)

Desperate to win over millennial consumers who have largely rejected the fast-food titan, McDonald’s has gone all in on using Spotify to reach young people.

The company brings fresh content directly to consumers by sponsoring The Drop, a website where Spotify releases exclusive photos, videos, and playlists from popular artists. Past participants include Fall Out Boy, the Gaslight Anthem, and Childish Gambino.

The brand is also the creator of the ListenIn app, which allows people to see the most popular songs among their Facebook friends.

These creations allow consumers to associate the Golden Arches with two things they care deeply about: their favorite artists and their friends, a smart call when it comes to marketing to millennials. 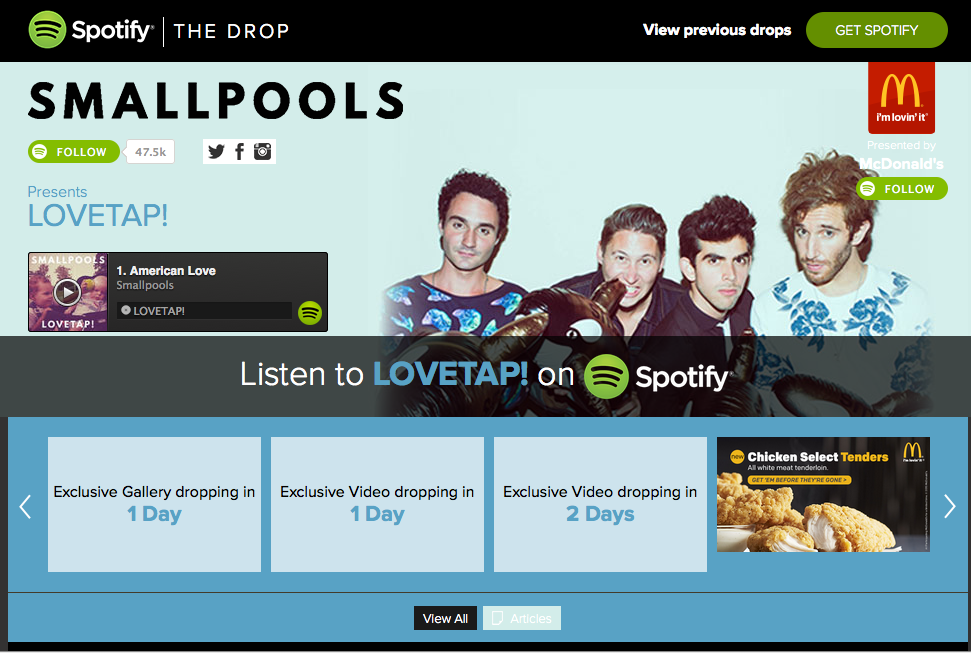 In 2013, Jose Cuervo launched a campaign to reach college students in the United Kingdom by asking student radio stations from around the country to submit their best playlists. The public was then asked to vote for their favorite of the track listings, with the winning school, Portsmouth University, earning a free party with DJ sets by members of Hot Chip and the Maccabees.

The campaign got more than 270,000 views on Spotify and drove sales up 220 percent at the school that won the party.

The soft-drink brand was one of the first advertisers to use Spotify’s sponsored session video ads when they debuted this past fall. The ads offer users 30 minutes of advertising-free listening in exchange for watching a short video, a much more consumer-friendly option than the annoyingly interruptive traditional Spotify ad.

Earlier, Coca-Cola had created the PlaceLists app, which allowed people to see which songs were being played in real-time in countries around the world. This played well to Coca-Cola’s brand message of “spreading happiness”—in this case through the shared experience of music.

Though the app is no longer running, Coca-Cola continues to sponsor regularly updated playlists of the most popular tracks in various countries.

As any fighting fan will attest, music is an integral part of the UFC experience. The songs fighters choose to accompany their entrances are used both to amp up the crowd and to help communicate the fighters’ personalities to the public.

In 2012, UFC used this connection to produce what at the time was the most successful Spotify campaign ever. For the finale of The Ultimate Fighter—a reality show that is a combination of The Real World and Survivor, only with people punch each other in the face instead of voting each other out—the participating pugilists selected two songs they would like to make their entrances to. Then, fans were able to listen to the songs on Spotify and vote for which one would win.

According to Mashable, the campaign attracted four times as many votes as any previous Spotify campaign.

With Spotify locked in a cage fight of its own against streaming audio rival Pandora, it’s knockout creative campaigns like these that will be crucial in helping it land advertising dollars from major brands. If nothing else, they serve as examples of the power music has to help brands create meaningful experiences for their audiences.