How a Video Game Company Gained Ground With Documentary Filmmaking

If the term “gamer” elicits visions of a 16-year-old kid sitting alone in his parents’ basement, you probably haven’t been following the world of e-sports very closely. Gamers are now competing in front of thousands of spectators for massive cash prizes, and the market is growing fast. With the influx of money and a rabid fan base, it shouldn’t come as too much of a surprise that video game companies are leveling up their content marketing efforts.

Take Riot Games, the company behind the massively popular League of Legends. On January 28, Riot released a 45-minute documentary, titled Frequencies, that follows the daily challenges and triumphs of the five-person team dedicated to making the game’s music.

For those out of the gaming loop, League of Legends is an online game in which teams of five compete to destroy each other’s home bases. The game is free to play but earns revenue (a lot of revenue) from in-game micro-transactions. About 67 million people play every month, and last year’s World Championship match series in Seoul, South Korea, attracted 27 million viewers.

Despite the massive fan base, Riot has traditionally been tight-lipped when it comes to revealing how it makes the game. For hardcore League fans, Frequencies offers a rare inside look.

“Having played the game for five years now and always following the music they put out, it really is exciting because they’ve always been a pretty closed-doors company,” said Andy Baker, president of the collegiate e-sports club at Wittenberg University. “They are transparent, but they make sure they hide what it is they’re doing to really surprise and please the fans.”

Baker doesn’t seem to be alone in his excitement: The video has racked up over 400,000 views on YouTube since its release.

When that character’s release was postponed, the project evolved and Slain decided to spend a couple of weeks with the music department and immerse himself in their daily routine.

The documentary ended up following the music team over the course of three projects: working on the music for the entire game; creating a music video for a character, Amumu; and creating an album for Pentakill, a heavy metal band inspired by the game.

It seems unlikely the film will inspire anyone who isn’t already familiar with League of Legends to start playing, but it’s an excellent example of a company prioritizing relationships with its existing users. The film allows gamers to connect with the people involved in the nitty-gritty creation of the game, giving them the chance to learn about a facet of the production process they may not otherwise have known.

“They really put the priority on pleasing their player base instead of the immediate profit like many other companies,” Baker said. 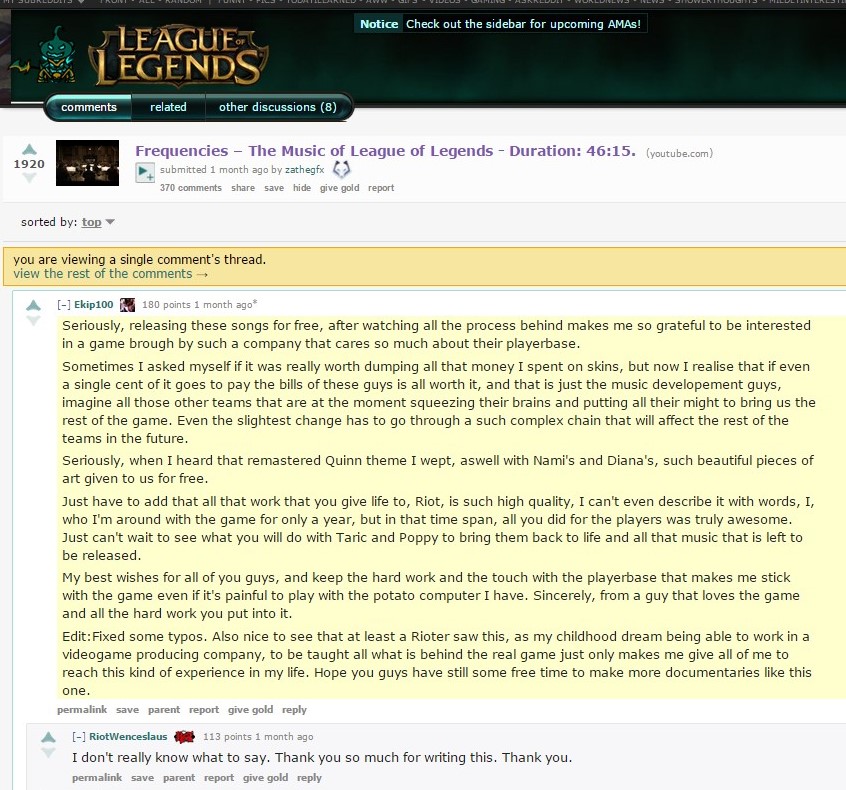 The top comment on Reddit, with 769 points, was a plea to “watch [the film] in its entirety,” while another praised the film’s authenticity and exclaimed, “This is the type of content I would love to see more of.”

As the company website says: “We splashed around in uncharted waters with Frequencies, and we hope to roam these regions again as we share more Riot stories.”

For the many fans of League of Legends, the next story can’t come soon enough.