Lelo, a self-described purveyor of “high quality Pleasure Objects,” has decided to make a movie—and no, not the kind of movie you’re thinking of.

You don’t need to go down a seedy alleyway in order to see Beyond the Wave, their feature-length film starring Starship Trooper‘s Casper Van Dien. In fact, you won’t even feel dirty after watching it. You can even check out the movie’s website at work and keep your job.

Lelo’s film is just the latest in what seems to be an increasingly popular trend: branded movies. After the massive success of The LEGO Movie, it’s not surprising to see other brands jumping on the bandwagon—we just didn’t expect it to be one that sold “intimate lifestyle products.”

A movie with a message

Surprisingly, the film is purported to have come out of a genuine concern for the current state of relationships and the ambiguous role of Lelo’s products. According to the feature’s website, Beyond the Wave follows one man’s experience in a “post-apocalyptic world where men and women choose to live apart.”

Van Dien’s explanation for why he joined the film, given through a press release, speaks to the movie’s legitimate concerns: “When I read the script, the project spoke to me on a personal level. I think many people in 2015 can feel lonely and disconnected even when someone is right beside them. Beyond the Wave shows the importance of not only relying on yourself, of not just communicating or spending time with someone, but genuinely trying to understand your partner’s perspective.”

You might assume that Lelo would use their movie to show their products in some steamy sex scenes. After all, a film is an amazing platform for both garnering large audiences and sneaking in product placement. The trailer for Beyond the Wave, for instance, already has over a million views since its release on February 10.

Yet not a single one of those viewers got a glimpse of Lelo’s toys. In reality, the only direct connection that the movie has to “Pleasure Objects” is its title. The word “Wave” refers to Lelo’s “Ina Wave” device, which was launched in late 2014.

In a roundabout way, the product actually helped to inspire the film.

As Steve Thomson, Lelo’s head of marketing, explained in the press release, “The backstory is that many testers commented that the Ina Wave™ was ‘better than sex’ or ‘there was no need for relationships anymore.’ That really got everyone at LELO thinking hard about our brand’s responsibility.”

As a result of the company’s findings, Lelo’s goal for Beyond the Wave was to show how necessary deep and emotionally connected relationships are—especially when it comes to intimate moments.

“What we want from this movie is to go beyond what people expect from a sex toy company and help them get closer to their partner,” said Thomson. “We want to show that physical connections will be even more satisfying if you also invest time in understanding your partner’s perspective.”

Since Lelo sells toys that are made to be used as a couple, it only makes sense that their movie trailer should be watched with a partner as well.

Cue PlayTogether, an interactive viewing experience. In order to play, couples need to put their phones side by side. After sharing the original trailer on either Facebook or Twitter, they can go on a sort of “choose your own own adventure” style journey with the film’s stars.

The next steps in order to actually make it into PlayTogether, however, are more of an exercise in inter-partner communication than they should be: 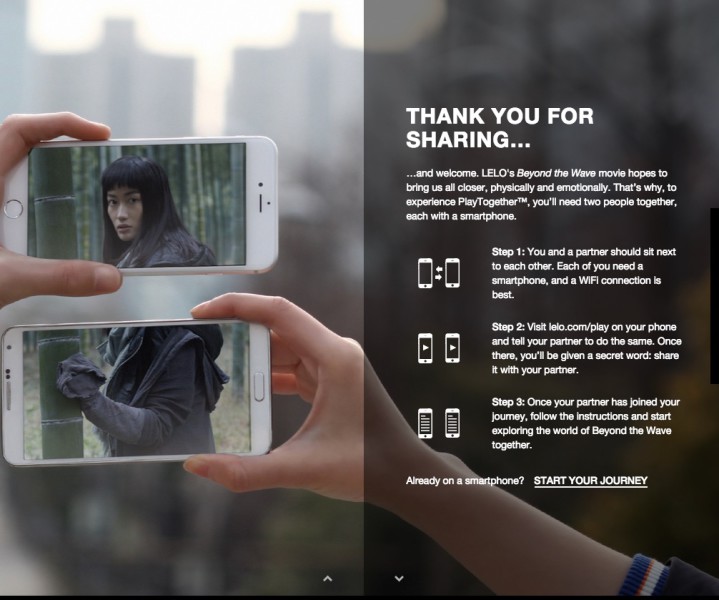 After putting in a variety of passwords, couples essentially view a trailer on their iPhones, each with one half of the image. This seems like a lot of effort for little reward.

Lelo’s head of marketing gave an explanation to Marketing Land: “Our goal with Beyond the Wave is to encourage couples to connect both with the story, and through the act of watching, the movie itself,” said Thompson. “It brings couples closer together and encourages them not merely to sit in the same room but to engage with each other’s point-of-view and to spark a unique interaction.”

Lelo isn’t marketing through trailers alone, though. On their YouTube channel they have a playlist of 69 (seriously) videos that feature behind-the-scenes footage, as well as descriptions of their sex toys. One of my favorites, while it doesn’t describe a “pleasure object,” gives a more in-depth description of the movie’s plot.

Are Branded Films a Future Trend?

Lelo isn’t the only company to branch into the feature film game. JamWix has already adapted a horror movie called The Banshee Chapter for the virtual reality headset Oculus Rift. Check out the trailer, if you dare. Personally, I’m glad that I don’t have to watch a movie about mind control in 3D.

A certain beverage company that gives you wings has also gotten into the movie-making industry. Red Bull, the purveyor of energy and adventure, has its own fully-featured media house. Its range of productions are impressive. The people at Red Bull have made features that cover everything from break dancing to the dangers of corporately sponsored newscasts.

And of course Lego’s LEGO Movie is the crown jewel of the genre. The fact that movie critics thought it was snubbed by the Academy, and that average movie-goers were so upset about it, is the best example of how well-done branded films can be respected and loved.

Lelo’s Beyond the Wave is set to be released this summer. If it’s successful, it will be just one more reason for other companies to start hiring their own film crews. And if The LEGO Movie has shown us anything, it’s that companies can create branded content that both promotes their product and is wildly entertaining. Personally, I’ve got my money on a Veggie Tales reboot.