How Maker’s Mark Built an Engaged Community of Bourbon Lovers

When it comes to bourbon, everyone has their favorites. Some enjoy a nice glass of Knob Creek’s latest batch, while others may have a soft spot for Jim Bean. But when it comes to marketing, it’s safe to say that Maker’s Mark stands out from the pack—and has been since its start in 1954.

Maker’s marketing tradition began with the the work of Margie Samuels, who co-founded the label with her husband Bill. While her partner perfected the stuff inside the bottle, she designed and directed everything from its unique shape and red wax seal to the company’s insignia, as well as the messaging and typography that we still see on its labels today.

Since then, the brand has made a smooth transition into the digital age, embracing the new ethos of content marketing and social media wholeheartedly. Maker’s has also built an impressive loyalty program, which, combined with their social and content marketing efforts, has created an engaged, bourbon-loving audience.

Let’s take a closer look at how they’ve done it.

When it comes to customer retention, it doesn’t get much more effective than Marker’s Ambassador program. To earn the title, fans of the Kentucky bourbon pledge to share their preference for Maker’s with friends, family, and acquaintances in exchange for a variety of perks, such as getting their names engraved on a brass plate and stuck on their own barrel of bourbon.

Ambassadors follow their barrel’s progress from start to finish, a period of six to seven years. When their bourbon is ready, ambassadors can buy their very own bottle complete with custom labels.

The program as a whole upholds an air of exclusivity and prestige, affording its brand ambassadors an array of benefits including holiday gifts and invitations to special events, along with the chance to dip their prized bottles in that iconic red wax for a final personalized touch.

It’s a powerful way to establish a long-term emotional connection between company and customer, helping to ensure retention for years to come. These ambassadors are brand loyalists that are interacting with the company directly, rather than casual fans that simply follow Maker’s on social media.

In short, according to brand and marketing expert George Rudenauer, what Maker’s is offering are “feel-goods.”

“There are lots of wonderful, fine quality spirits out there, but people aren’t buying them because of high ratings—it’s the feel-good element,” says Rudenauer. “Maker’s invests in brand meaning in everything they do, and for consumers, it’s not all about the liquid and how it tastes. It’s about what it stands for and the excitement behind it.”

For instance, “How to Make a Bourbon Ball” has garnered over 600,000 views since its YouTube debut in 2012, while a visual addition that was recently posted collected over 300 Likes within two hours on Facebook.

The social team also does a great job of shining a spotlight on user-generated content by consistently regramming, retweeting, and sharing all kinds of fan commentary and interactions. It’s the kind of connection that helps fuel further engagement by motivating and maintaining an active and ongoing exchange, while also guiding fans to ongoing and upcoming events, initiatives, campaigns, and new products.

2013’s innovative “You Don’t Know Bourbon” campaign, for example, generated a remarkable level of engagement on Facebook and Twitter by using an interactive quiz to test “bourbon geeks'” knowledge of the drink. According to Rachel Ford, the senior content strategist at Doe Anderson, the quiz surpassed the team’s original goals with a completion rate of 80 percent and an average engagement time of 144 seconds. 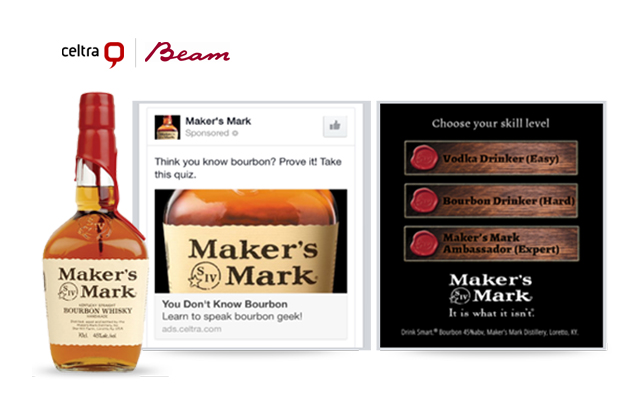 A foray into Reddit was similarly successful, which surprisingly few brands can honestly claim. Maker’s Mark was the first liquor brand to test the platform’s waters in December 2013, and last spring published a simple yet effective campaign that took advantage of the Kentucky Derby to reel in user interest.

Redditors were asked to comment with ideas for whiskey-themed racehorse names, which garnered over 1,000 responses within a week. 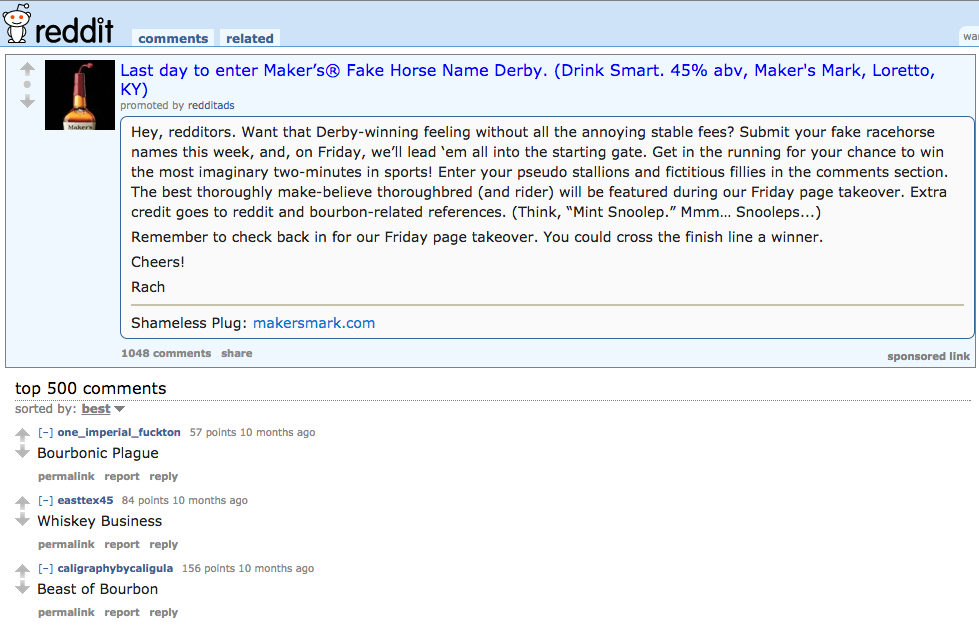 “Maker’s Mark does the 360 of the brand very well,” says Rudenauer. “Wine and high-end spirits in particular have a great social opportunity. Knowing your audience, speaking with transparency, and employing good content strategy is key.”

The brand’s recently revamped web redesign embraces these ideals, with a landing page that now features a large-scale introductory image, below which visitors can find a grid of photos that lead to whichever part of the site or brand that interests them most.

“There are many different ways you can choose to engage with the brand, before [Maker’s] even has a statement of who and what they are,” Rudenauer continues. “You can go right to where you want to go instead of having to go through what they may want to say first. That’s very clever and forward-looking, and it speaks to their strong sense of an all-encompassing message.”

To top it all off, Maker’s offers year-round tours of its distillery, an exercise in complete transparency that, according to visitor services, has drawn about 110,000 people over the past year. That’s a lot of traffic for a small town like Loretto, Ky., whose population was reported as just 721 in 2013.

Overall, Maker’s has blazed a path in marketing that demonstrates that legacy brands can utilize the new tools of the digital age just as well as anyone. Their marketing provides valuable content and engagement, the kind that just might turn bourbon geeks into Maker’s geeks.