For his birthday this year, hip hop mogul Dr. Dre got something unexpected: the cover of AARP magazine.

Last week AARP, the 38-million-member nonprofit interest group known for serving a community of 50-and-over consumers, created a mock cover of the music industry heavyweight and tweeted it to its 86,000 followers. The move was part of a long-running effort to call attention to its brand-defining philosophy that “life after fifty” isn’t all downhill.

AARP and its various chapters use hashtags like #DisruptAging and unofficially adopt celebrities who, like Dr. Dre, embody the message that older Americans don’t need to abandon their goals and dreams. 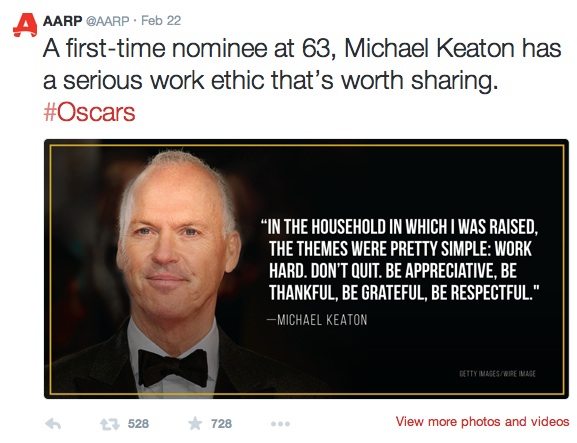 With people over 50 starting to get more comfortable with social media, AARP is wise to engage them with unexpected content. Surveys show 34 percent of baby boomers are now on YouTube, 31 percent are on Twitter, and more than half of all online consumers over 65 are active on Facebook.

“The biggest growth over the past two years is the evolution of social and mobile,” Tammy Gordon, AARP’s director of social communications told Direct Marketing News. “Everything we build needs to be viewable and interactive, no matter what device (members) access it on.”

The organization’s commitment to digital media goes beyond just marketing. In September 2014, AARP partnered with Intel to launch RealPad, a low-cost tablet specifically for baby boomers inhibited by tech. Equipped with oversized graphics and pre-loaded apps, the device is designed to help them make video calls and stay connected with “no confusion and no frustration.”

Despite the stereotypes about people who are getting older, baby boomers have a lot on their plates. Many feel lost when trying to understand new technologies while simultaneously downsizing their homes, watching children leave home, and preparing for retirement. Recognizing consumers’ need for a game plan, AARP introduced Life Reimagined in 2013, a free digital platform promoted as “a GPS system for life.” The site provides tools, information, and programs that can help users identify what they want from the next phase of their lives and take the necessary steps to achieve it.

A dashboard lets members track details over time, including causes of stress and life passions. Each action is personalized to the user. And articles written by health, career, and relationship specialists guide members through the process, while email notifications remind them to stick to their customized agendas. The design throughout is bold, with a focus on interactivity.

On Twitter and Facebook, Life Reimagined links to stories and quizzes using motivational hashtags like #MorningInspiration and #ThriveThursday. The companion YouTube channel is a repository for inspirational videos, including profiles of boomers who have made big changes in their lives to follow passions. Kathleen Carmody, a divorced recovering alcoholic, is now a triathlete. Jean Meade, a veterinarian, went back to medical school late in life and ultimately launched an inter-generational assisted living community. Both self-improvement stories have the potential to provide viewers with the impetus they need to realize their own ambitions.

In January of last year, AARP introduced an offshoot of the Life Reimagined platform called the Life Reimagined Institute. As a “think-and-do lab,” it develops programs, both online and offline, that enhance the Life Reimagined experience. The Institute’s site is another source of useful content that runs the gamut from longform stories like “Robots Want Your Job” to surveys that asks members to consider whether they’re “adaptable.” The pieces are designed to get consumers thinking about how to position themselves for the future.

AARP is also said to be introducing a Grand Challenge contest asking entrepreneurs and business-savvy baby boomers to submit an idea for an invention. The winning idea could ultimately be funded by the Institute and incorporated into its cross-platform network.

With such a robust content marketing strategy, AARP is delivering value to a huge audience that’s discovering digital media—and their futures—in droves. Whether you’re Dr. Dre or an actual medical doctor nearing retirement, the ultimate message is just as relevant: “What are you looking for in life?”