The sponsored content industry has taken its latest step toward automation. As Business Insider reported earlier this month, native advertising exchange Sharethrough will soon open its platform to real-time bidding.

The news, coupled with a similar announcement in December from native ad tech company TripleLift, highlights increasingly ambitious attempts by marketers to integrate programmatic technologies into their native platforms. This trend toward programmatic is meant to help solve what marketers have long perceived as one of native advertising’s biggest weaknesses: the difficulty of getting as many eyeballs on a piece of sponsored content as you would with a traditional display ad.

Sharethrough and TripleLift are undoubtedly pushing to give advertisers the scale and targeting they get running display campaigns, but the rise of these programmatic native ad exchanges begs a more fundamental question: Do the brands that use them risk undermining the “native” aspects that made sponsored content appealing in the first place?

The reason BuzzFeed can charge $100,000 for a custom-created sponsored content campaign is brands know their stories will match the quality, tone, and appearance of the trusted editorial work that surrounds it. But the same listicle that blends in seamlessly with BuzzFeed’s aesthetic might stick out like a sore thumb in the editorial stream of a site like Sports Illustrated—particularly if sports fans have to leave the site to read it.

The question for marketers, then, is whether the scale benefits provided by programmatic buying outweigh whatever is lost by providing consumers with a slightly less seamless sponsored content experience.

“A lot of this is being tested right now to figure out what is the optimal experience for people… but all trends are pointing toward portability,” says Sharethrough VP of Marketing and Communications Chris Schreiber. “For content marketers, the highest objective is engagement with the content, not necessarily just traffic to the site that it’s housed on.”

Through its latest development, Sharethrough will give brands and agencies the ability to integrate their purchases of in-stream ads into the demand-side platforms they are using to buy display ads via real-time auctions.

While Sharethrough’s advertisers were previously able to target broad demographics in editorial streams—like “women between the ages of 18 and 34”—they will soon be able to target individual readers based on first- and third-party data.

Of course, programmatic ad-tech companies like Sharethrough are not only changing how native advertising is distributed, but also how it appears to readers.

In this demo available on Sharethrough’s website, a link sponsored by the clothing brand Levi’s shows up on People magazine’s homepage like a standard native ad. But once users click the link, they’re sent to the men’s fashion website Hypebeast to read the article, not People. 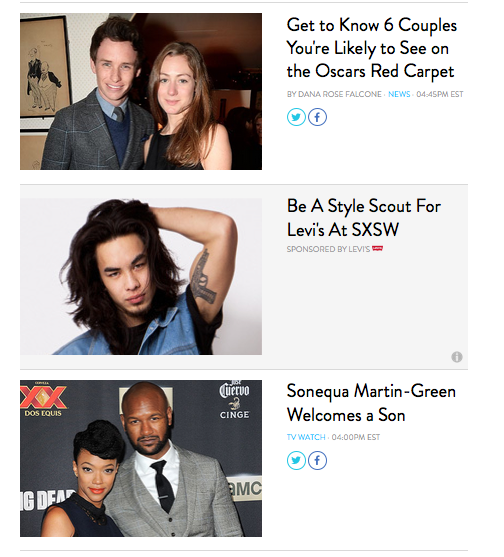 While some consumers won’t like the disruption, there is precedent for sponsored content that links to a different site.

Sam Ashken, head of audience intelligence at The Barbarian Group, points to Facebook’s successful in-stream ads as evidence that consumers won’t mind clicking off the site they’re browsing if the native content is engaging.

And while many marketers now think the best way to engage people online is without disrupting the audience, Ashken believes that in certain situations, a well-timed distraction can be just what the doctor ordered.

“Actually, as an advertiser, you sometimes want to disrupt people’s expectations,” Ashken explains. “You want to do it in a way where they enjoy the content you disrupt them with, but I don’t think it’s necessarily a bad thing if content which is mediated programmatically ends up feeling a little less in keeping with the rest of the site, so long as it is labeled as sponsored content.”

However, Chris Rooke, Senior Vice President of Marketing and Communications at the native ad network Nativo, makes an important distinction. He says users expect to see content that will lead them elsewhere when they are browsing social media sites like Facebook, but then when they come to a news website, they do so intending to stay where they are.

Like Sharethrough and TripleLift, Nativo is a platform that allows brands to distribute their content to the editorial feeds of a variety of publishers based on demographic and location targeting. But in all cases, users who click on its stories remain on the same website, and the article page is formatted to look like any other story published by that particular site.

Even then, one could argue Nativo’s ads are not truly native. After all, the sponsored content it serves was not created specifically for the site it will ultimately be displayed on, meaning that, while a sponsored story might have the same appearance as the editorial content on its host publication, it won’t necessarily match the tone and writing style.

As Contently co-founder Shane Snow said last year, this fit between an advertiser’s content and its audience is a crucial component of native advertising. “Just like with regular publishing, there needs to be a human touch for the content and the fit to be good,” Snow says.

Nonetheless, Rooke explains sponsored posts will retain their native quality so long as the readers who click on them remain in a similar environment to the one they had previously been in.

“Our sponsored posts replicate the experience that a consumer would get with editorial content, so it really stays true to that social contract between the publisher and the consumer,” he says. “The consumer is not feeling as though they have been tricked into clicking on something that is now behaving like a banner ad that takes them off-site unexpectedly.”

Whether or not native programmatic does in fact maintain the social contract between the publisher and the consumer, marketers certainly seem to think it works.

Business Insider reports that Sharethrough has been profitable for five straight quarters and is targeting up to $100 million in revenue for 2015. The marketers fueling this growth see programmatic native as a means of getting the scale of programmatic displays without sacrificing the branding benefits they receive from hand-crafted sponsored content.

In fact, Just Media President Brandon Friesen saw branded content on Nativo outperform paid search on performance metrics like conversions and brand metrics like engagement time. While he says his media agency had established one-to-one relationships with publishers to build custom content in the past, those campaigns couldn’t drive the scale Just Media needed to create for its client.

“Those direct publisher relationships tend to be pretty expensive,” Friesen says. “And then what you get out of that typically isn’t as much as what you get out of some of these native networks like Nativo, where you can take that single piece of content and still distribute it on scale, but it lives within various publisher sites. That way, it’s still a nice experience for the user.”

Of course, this doesn’t mean the days of publisher-specific content are over. Ashken believes there will always be a role for highly-customized content that builds a brand’s appeal despite not being particularly scalable.

According to Friesen, the best strategy might be to create custom content with a specific publisher in mind and then distribute it programmatically elsewhere. Even if the content doesn’t perfectly fit the editorial sensibilities of other publishers, it will get a brand’s story in front of a lot of readers.

And hey, it certainly beats forcing those readers to look at another banner ad.