The digital video space is quickly reaching its saturation point. Both newer players, like Facebook, Twitter, YouTube, Netflix, Hulu, Amazon, and old media companies, like CBS, Dish, and HBO, have all made aggressive moves to gain an advantage in an increasingly competitive field. But in spite of all the big names, the digital video platform with arguably the most potential to disrupt the status quo is one you’ve probably never even heard of: Vessel.

Vessel is a new video site that features a simple, and perhaps brilliant, way to monetize how people access their favorite videos online. Co-founded by Hulu’s former chief executive, Jason Kilar, Vessel’s plan is to convince content creators to release their videos—exclusively—on the platform for at least 72 hours.

Put simply, Vessel wants the big moneymakers of the digital video industry—YouTube stars, music studios, and media companies—to debut their content on Vessel first before distributing it on other social channels. After that period expires, Vessel will let users access all their videos for free.

As an example, let’s say your favorite YouTuber is DevonSuperTramp; now, instead of just releasing a live-action Assassin’s Creed video on YouTube when it’s finished going through post-production, he would exclusively debut that videos three days earlier on Vessel. And theoretically, people will pay Vessel to get that early access.

In terms of revenue, Vessel is taking a two-pronged approach. One, they’ll charge users three dollars per month to access all their videos under the exclusive time periods. And two, they will run ads on both the free and paid versions of the service.

The company is pinning their goals on the hope that digital customers will pay to see their favorite content early. Rather than chasing established platforms like YouTube and Vimeo, whose models are partly based on the idea of exclusive content, Vessel is instead relying on exclusive time—a peculiarly old-school way of thinking similar to how TV and film operate. 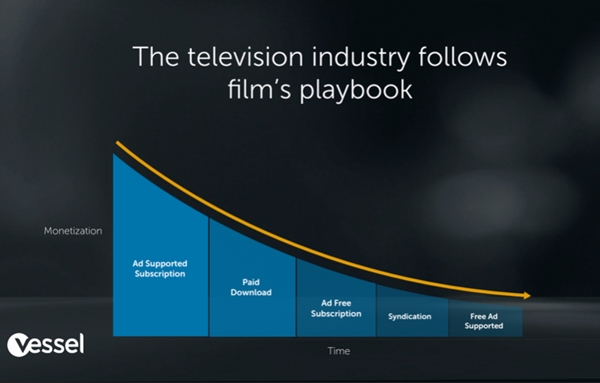 Pointing to the struggling TV and film industries as examples of the model’s success, as Kilar has done, is a bit odd considering most brands have accepted that channels like YouTube and Netflix are poised to dominate the majority of video consumption in the future. It’s also worth noting that comparing Vessel to the TV and film industries is not a perfect analogy. Many consumers go to the movies for a unique visual and audio experience, not just early access, and traditional cable is surviving—for now—largely because of live events with broad appeal such as sports and award shows.

To Vessel’s credit, they’re simplifying this old-school system into two windows (paid and free), and doing it at a much quicker pace. Instead of forcing consumers to wait for months after a movie goes out of theaters, Vessel’s videos will go straight to their free platform once the paid timer expires. They’ve also adopted a mobile-first approach to development from the get-go: “The Vessel experience was designed for mobile devices,” Kilar writes in a recent blog post. It’s a savvy move in light of the mass exodus to mobile that will likely dominate media consumption and advertising in the coming years.

In reality, though, one of the biggest challenges to Vessel’s plan may be that it’s so late to the game—consumers have had 10 years to grow comfortable with the subscription-based or free services that are already popular. Will they really be willing to pay to watch something early when they can just wait it out for a few days?

We won’t have an answer until the service opens to the general public, but there’s no doubting the fact that creators, investors, and advertisers have been more than eager to support the service in spite of the lingering questions. Vessel has already raised about $75 million.

The company estimates it can deliver $50 of revenue per thousand views on the platform to content creators because of a generous share of advertising (70 percent goes to content creators) and subscription profits (60 percent goes to the creators). Those high percentages have helped lure some of the biggest names in digital video to the service: YouTubers like Casper Lee, Rhett & Link, Epic Meal Time, Machinima, and Explosm Entertainment; music studios like Warner Music Group, Vevo, and Universal Music; as well as publishers like The New York Times, BuzzFeed, and Time Inc. Other video-intensive websites such as Funny or Die, CollegeHumor, and TED will also add their videos to the mix.

This significant draw of talent is impressive, and it’s easy to see why these creators have been so eager to join. They really have nothing to lose and a lot to gain.

What remains to be seen is how many of these creators will take advantage of the platform’s exclusivity.

To persuade them, Vessel is opening the subscription revenue only to the videos that are on the timed part of the platform—once the exclusive time period is over, revenue will only come from ads. Creators will earn the subscription revenue based on how much time viewers spend on their videos relative to the entire pool of exclusive clips, further sweetening the deal for creators who release high-quality content that goes viral. Theoretically, dominant video makers could make a lions-share of the subscription profits if they release enough popular videos.

On YouTube, creators can be relatively small fish in a huge ocean; on Vessel, they can be the biggest fish in a small pond that has room to expand. Posting early on Vessel might engender a sense of resentment among YouTube fans, but any loss in total views would probably be offset by Vessel’s superior revenue gains. It’s an interesting tension that content creators will have to navigate, assuming the platform manages to draw the user-base it desires.

The other side of Vessel’s revenue equation—advertisements—also features a unique blueprint. One of their main selling points to future advertisers is an inventive new ad format they’ve christened the “motion poster.”

As users scroll through the video options, quick animated ads will appear in between. Their GIF-like look will draw the eye, but uninterested users can simply scroll by if they’re not interested. It’s an elegant way to satisfy both advertiser and consumer, and the platform’s other ad format—five- and six-second pre-roll videos—is similarly unintrusive yet effective.

With their balanced and disruptive approach to the digital video space, it’s no surprise competitors like YouTube are already starting to protect themselves. Still, Vessel’s entire operation will fall apart if the promise of early access doesn’t take off with the video community.

Kilar hopes, however, that “those who care deeply about a creator or a brand” will buy-in to Vessel’s emphasis on exclusivity. If the Internet is known for anything, it’s that passionate fans are often more than willing to part with their money for early access. Whether those zealous fans will pay to see their favorite videos earlier than their friends, well, we’ll just have to wait and see.