For Doctors Without Borders, Content Marketing Is a Matter of Life or Death

Doctors Without Borders operates at the front lines of some of humanity’s most profound dramas. They send brave medics to war-torn regions, natural disasters, and other major emergencies, whether that be South Sudan or refugee camps filled with displaced peoples fleeing violence in Iraq. The humanitarian organization is also widely recognized for its role in fighting Ebola, and a few of its doctors have contracted the disease.

It’s no surprise, then, that Doctors Without Borders has some incredible stories to share. What’s amazing is how well it tells them.

Consider their newly released interactive documentary that tells a global story of refugees escaping violence. In 2014, the number of displaced persons surpassed 50 million, a milestone that hasn’t been hit since World War II. The documentary, Exodus, follows three groups fleeing from, or to, distant regions: Mexico, South Sudan, and Syria.

The website begins with three portals, one for each group. Each lead to a longform article that describes the crisis, explains why people are being pushed out of their homes, and how the refugees have managed to endure their journey. Beautiful photographs, infographics, and short Vine-style videos interlacing the text combine to bring each story to life.

The beginning of Chapter 3 of the Syrian section illustrates the many challenges of refugee life through the story of Ahmed Beidun, who lost his foot in an airstrike during the Syrian Civil War. Featured is a picture of Beidun holding his son, and hovering over it displays this gut-wrenching quote: “Before I used to play with my son. Now I can’t. I can’t work either. I just want my foot back.”

Each piece goes beyond storytelling, often presenting potential solutions to the crises as well. The Syrian piece features pictures of Syrian refugees arrested at the Greek border, having attempted to sneak into the country. The pictures provide powerful visual evidence for their plea to the European Union to reverse barriers on immigration to help accommodate uprooted refugees. Data and a graph of Greek–Turkish border arrests also work to back up their proposal.

This is how Doctors Without Borders’ content often works: They explain a problem, and try to provide a solution while encouraging viewers to contribute to the cause.

Stories straight from the field

Exodus is only one of many stories told by Doctors Without Borders, or MSF as they’re internationally referred to (from their French name Médecins Sans Frontières). Their news site publishes a couple of articles a day. They are usually pulled straight from their far-flung hospitals and medical centers: The Nobel Prize-winning organization sets up shop in more than 60 countries and has signed on more than 30,000 medical volunteers.

Doctors Without Borders also publishes more uplifting fare to complement their serious exposés. “The Boy Who Tricked Ebola” features an 11-year-old who survived the Ebola virus, and entertains others at the hospital with his joyful dancing. It’s a heart-melter.

The video was an unbridled success, racking up six-figure views and earning press coverage in outlets like the Daily Mail.

MSF also provides a unique window into current events, many times by describing the lives of people giving aid during crises. One recent article describes a day in the life of a Moravian chlorine sprayer who collects the bodies of living and dead Ebola victims and disinfects houses to help kill off the devastating disease. Another tells how motorcyclists have played an essential role in guiding medics around the Democratic Republic of Congo.

The organization employs award-winning journalists, like Phil Moore, to fill their stunning photo gallery. The photos are snapped from all over the world, featuring the likes of Central African refugees and the winter in war-ravaged Ukraine. Sometimes they post a “photo of the week,” highlighting one of the world’s major crises.

Staffers and victims are also given an opportunity to speak out on the organization’s blog hub. Phumeza Tisile is one of many tuberculosis sufferers who blogs at TB & Me.

These stories fill the non-profit’s social media accounts—particularly Twitter, which consists of a flurry of photos, stories, quotes, updates from Ebola hotspots, and so on. They sometimes even tell brief, delightful stories. 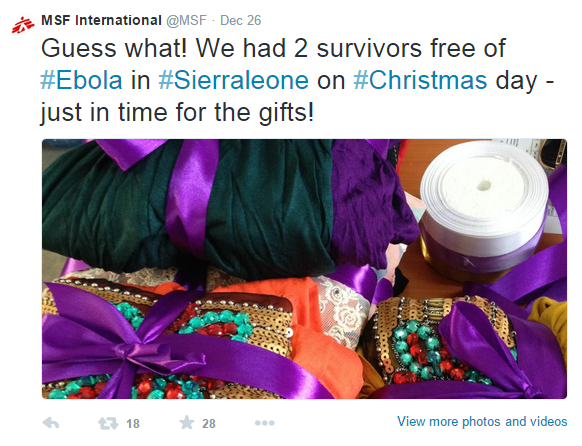 MSF wants to save lives with the massive and ambitious “Missing Maps Project.” Crises often hit underdeveloped areas, and these regions often lack accurate maps. As you can imagine, this is a big problem for medics trying to deliver aid. MSF claims they might have been able to nip Ebola in the bud if maps had been available.

As a result, they’re now attempting to build a Wikipedia for maps. They’re doing it with the help of Red Cross and the Humanitarian Open Street Map Team (HOT)—a group that wants to map the entire world. The Missing Maps Project, though, is geared specifically towards the most crisis-prone regions of the world. The finished project will be available for anyone to use. The Guardian calls it “nothing less than a human genome project for cities.” 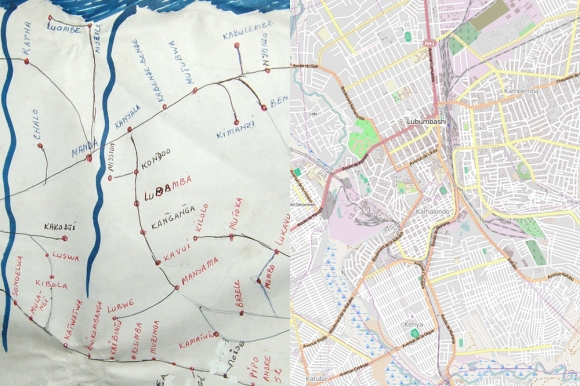 It’s a very ambitious goal, but the group is undaunted. “To reach our goal, we need the Missing Maps Project to be the biggest instance of digital volunteerism the world has ever seen,” the website says. To encourage participation, the sponsors are holding “mapping parties,” such as the “Ugly Sweater Mapathon” they held before Christmas.

Most of the nonprofit’s stories have a call-to-arms feel, but MSF has also launched explicit policy-focused campaigns to attempt to change how medicine is delivered.

MSF Access Campaign, launched in 1999, promotes access to medicines in developing countries. Medicine may be out of reach for a number of reasons: the equipment is too pricey, there are trade restrictions, pharmaceutical companies won’t profit by selling to the developing world, and so on.

Access’ most recent marketing campaign is the clever and content-focused Wishlist 2015. The infographic sketches the nonprofit’s top 11 wishes for 2015. Among them, MSF wishes for a new treatment for Ebola and that the U.S. would “stop bullying India,” which it calls the “pharmacy of the developing world.” 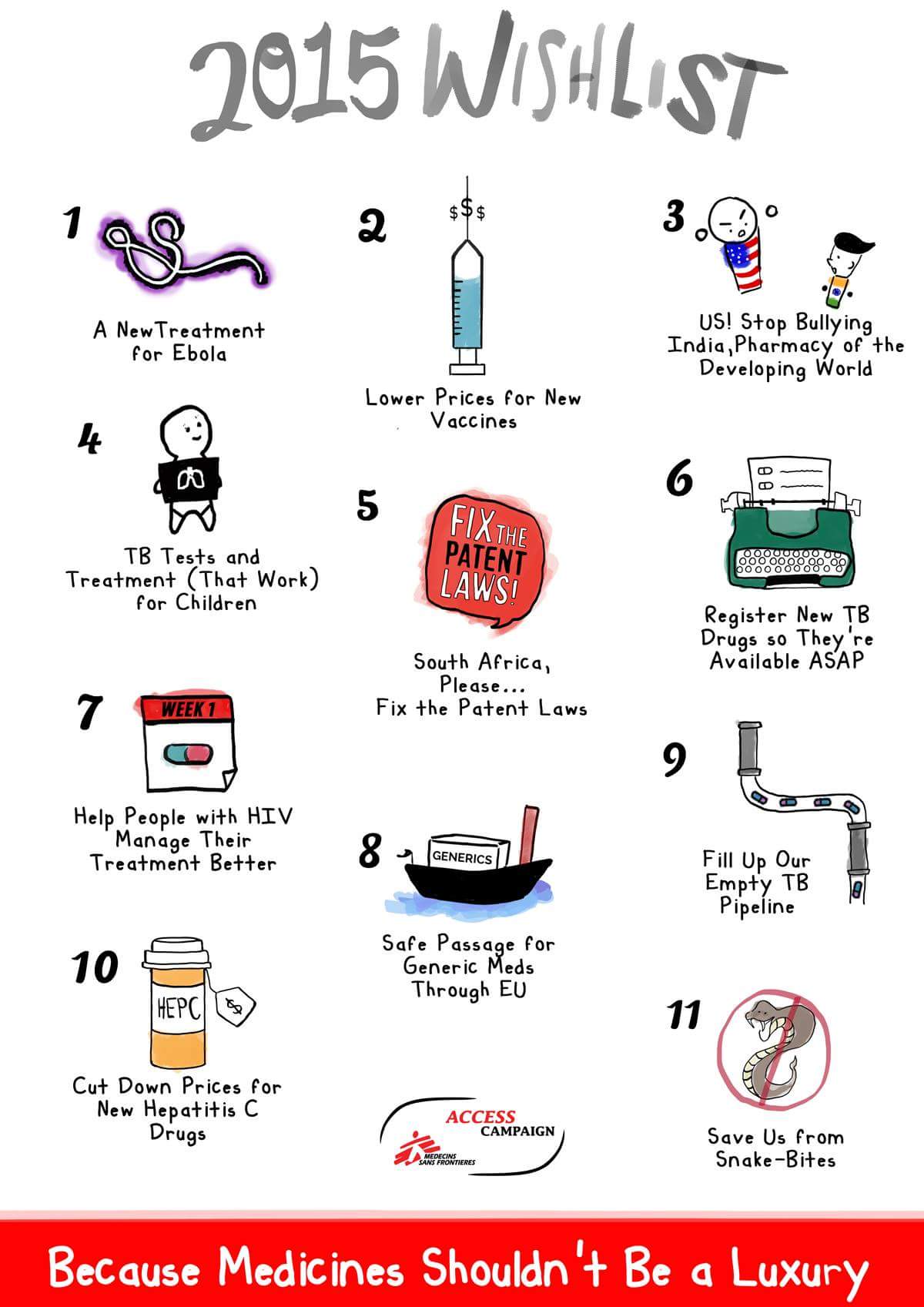 They used Thinglink to give the infographic a more interactive touch: Hovering over each wish provides a link to more information and a plan for addressing each wish. 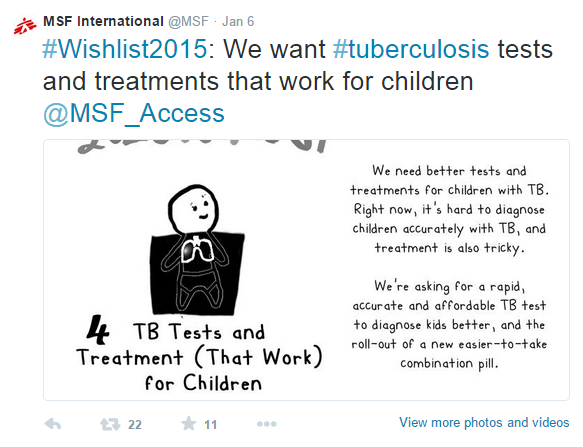 They pair other campaigns with content, too. Their drug-resistant TB manifesto asked for signatures to a petition demanding “urgent changes” to expand access to tuberculosis treatment. Tuberculosis can be cured, but many people die because they don’t have access to treatment. They explained the problem succinctly using a couple of infographics, like one that illustrates how it can take two years and more than 14,000 pills to treat the disease.

“Tweet for change” also incentivized easy action with a few pre-made tweets to promote the cause. All in all, the TB campaign was quite successful: More than 50,000 people signed the petition.

A small group of doctors and journalists founded Doctors Without Borders in 1971. They wanted to draw attention to the hardships of people trapped in war-torn regions. Though the humanitarian aid itself was of central importance, speaking out against injustice, regardless of national borders, was just as crucial.

Content, then, is central to MSF’s mission to spread awareness of the many crises affecting people around the globe.

“Silence has long been confused with neutrality, and has been presented as a necessary condition for humanitarian action. From its beginning, MSF was created in opposition to this assumption,” said Dr. James Orbinski, the then-president of the MSF International Council, when accepting the Nobel Peace Prize in 1999.

“We are not sure that words can always save lives, but we know that silence can certainly kill.”