5 Brands That Boosted Their Traffic With Content-Focused Redesigns

That’s where content-focused design comes in. One of the keys for a successful content marketing campaign is making your content accessible and easily consumable, and many established and startup brands are unsurprisingly seeing huge traffic surges by using a more content focused approach. But before we dig deeper into those brands, let’s first define the characteristics of content-focused design:

2. Improved readability and viewability of content. Content-focused also means making it as easy as possible for users to consume the content without strain or interruption. One example of this is making text easier to read, such as The New Yorker’s typeface changing for its online content. Also, any elements that distract from the primary content—such as navigation, advertising, and sidebars—are also minimized or designed in such a way that they don’t interfere with how a user might consume the content.

3. Better mobile web design. With 63 percent of adults using their mobile phones to go online and the increasing amount of time people spend on mobile media, there’s little doubt that having mobile-friendly designs directly contributes to readability—especially if a brand’s target audience primarily uses mobile devices to access their website.

4. Site integration. This means that even if the site is selling products and services, the content is given premium space on the homepage or navigation rather than just pushing for the sale upfront.

Now that we have a better idea of what content-focused design is, let’s look at a few notable brands that have put it to work:

Since 2012, Loverly, a wedding e-commerce site, had products at the forefront of its homepage design. But this all changed this past July when they decided to put their editorial content first.

An article from PandoDaily demonstrated how Loverly redesigned their site to emphasize their content sections, such as their striking photo essays of real weddings and wedding planning section, which covers how-tos, tips, and celebrity wedding news. Three months after the change, their traffic spiked by more than 450 percent, as shown by this chart from Compete: 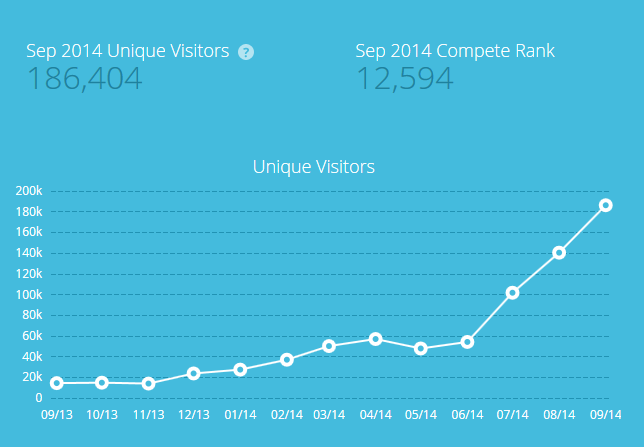 This traffic boost is even more remarkable considering it wasn’t peak season for the industry and, according to the PandoDaily article, the company hadn’t spent anything on user acquisition.

Neil Patel, a tech entrepreneur and digital marketer, runs the Quick Sprout blog which leads readers to his consulting services. While his blog hasn’t changed its design much over the years, in January of last year Patel was able to double his blog’s traffic from 121,311 unique visitors per month to 244,923.

What drove this growth? Longform content. Patel published extensive, multi-chapter how-to guides on online marketing, the first of which was “The Advanced Guide to SEO,” a 45,000-word guide that took Patel six months to create. 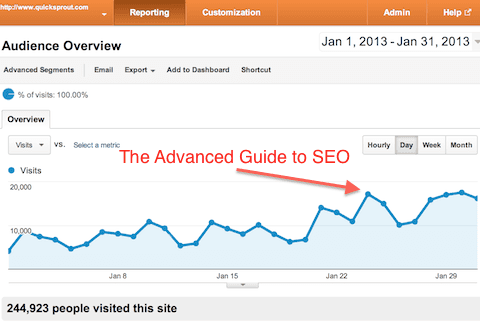 But it’s not just the length of these guides that makes Patel’s efforts content-focused; it’s the design as well. Each of his 12 guides take the full width of the page, eliminating sidebars as well as minimizing navigation elements. Links to these guides are also prominent on his blog sidebar, while his more popular blog posts aren’t as emphasized.

Plus, Patel didn’t scrimp on design. He was inspired by Moz, which spent $20,000 on the design of their wildly-shared beginner’s guide to SEO. “By studying the competition, I quickly saw that the guides that looked pretty tended to get a lot more social shares,” he wrote.

The rewards from releasing his first guide weren’t just an initial spike destined to fade: “The week after I released it, I had a steady flow of traffic each day,” Patel wrote in his blog. His stats the month after still showed significant continuous gains. Before he launched the guide, his daily visits were typically below 10,000. After publishing the guide, he had 16,000 to 18,000 visits per day during weekdays, and 10,000 to 12,000 visits per day during weekends.

Though Flickr’s design has always focused on showcasing user photos, they launched a major redesign in May last year that gave even greater emphasis to user-created photography.

For the homepage, instead of just listing the “Upload, Discover, and Share” features of the site, these features are reframed within large, high-quality user photos. In many of the subpages of the site, such as user photostreams and search result pages, photos are made larger and are previewed in higher resolutions. “There’s also a new slideshow mode that beautifully showcases photos so you can simply lean back and enjoy them without lifting a finger,” wrote Markus Spiering, then Flickr’s head of product, in a blog post announcing the redesign.

According to TechCrunch, Flickr’s visitors were at 86 million during April, the month before the redesign. These numbers climbed to 107 million in June to 110 million in July. As of September this year, looking at data from SimilarWeb, monthly visits were at 182 million.

It’s important to note, however, that there are other reasons that contributed to this increase. TechCrunch reported that Tumblr contributed the bulk of Flickr’s referral traffic—7.2 percent—so while the content-focused redesign played a large role in Flickr’s audience boom, Yahoo’s acquisition of Tumblr was also a significant piece of the puzzle.

4. Vevo has a 60 percent increase in video streams

Until March 2012, Vevo’s homepage design looked more like a blog or an online magazine. A dramatic redesign, which mimicked how users viewed traditional TV, made much more sense for Vevo’s primary content: music videos.

The new redesign also included an update to their mobile players, including continuous video streaming and the ability to look at additional artist and song information without interrupting the video. These changes led to increased mobile growth, with Vevo’s mobile and tablet apps experiencing a 146 percent increase in downloads while doubling their mobile traffic.

The result of the redesign, with some help from Facebook Open Graph integration, was a 60 percent increase in mobile video streams according to a report released by Vevo. 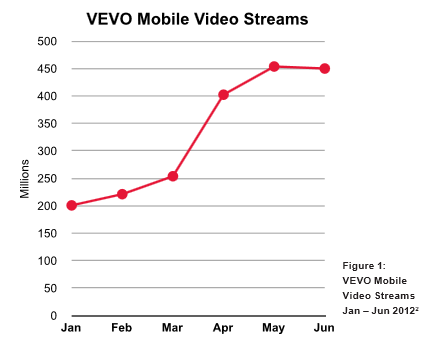 Through its traffic declined significantly during the second quarter of this year, music streaming service Rdio is regaining ground with their recent redesign. 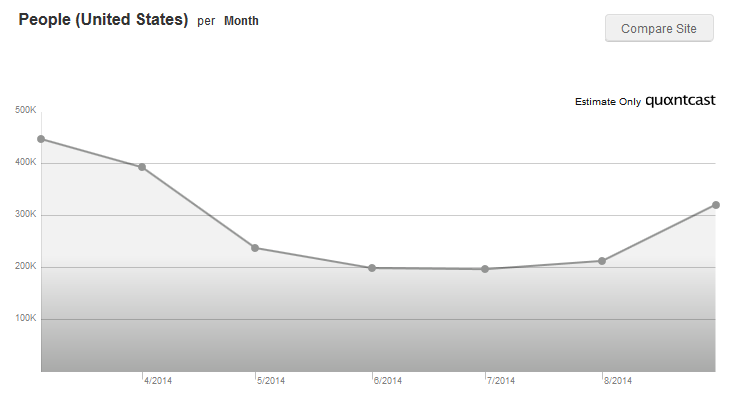 Rdio’s redesign makes it easier for users to discover new music based on their preferences, as well as access to different “stations” that allow for effortless, passive listening. According to their blog post on the redesign, this update is crucial because “Music fans have been forced to go to different services for ‘lean-back listening’ (radio stations) and ‘on-demand listening’ (albums, songs, and playlists). [This] cheats you out of having one service really get to know your music taste.”

They’ve also made upsell notifications less prominent, letting users focus on the reason why they go to the site in the first place: to listen to music.

While they’re a long way from beating similar services such as Spotify or Pandora, this boost in traffic from a content-focused redesign is a good first step out of obscurity.

What’s the point of having great content if it’s hard for your users to see it? Though we often discuss the importance of telling great stories, how those stories are packaged is in many cases just as important. These brands show that putting content first can pay off—especially when you have products and services to sell.