Is Chorus the CMS of Brand Publishers’ Dreams?

In April, Ezra Klein sent a ripple through the media world when he decided to leave The Washington Post for Vox Media. It wasn’t just the fact that Klein was leaving WaPo, but the reason he was doing it: for Vox’s content management system (CMS), Chorus.

“At our first meeting, we knew we were going here,” Klein told The New York Times. “They had the technology we thought we were inventing.”

Now, Vox may be opening up Chorus to the wider world, and it’s mighty big news.

In a late August blog post about the future of blogging, Vox Media Editorial VP Lockhart Steele wrote, “Here now, the buried lede: perhaps Chorus should become a tool for more than just those of us employed here at Vox Media, and a platform that transcends words in a way that Vox Media has long since transcended just being a collection of websites?”

For publishers of all kinds—from brands like Red Bull to old-press stalwarts like The Washington Post—this would be big news. One of the most famous maxims of art and design is that “form follows function”—the idea being that the shape something takes should be based on its intended purpose. This is what makes a CMS so essential. A CMS is the container of and structure for content. Its rules and limitations define what content creators dream possible, and its idiosyncrasies and dysfunctions translate into organizational and creative success or failure.

But on a practical level, what’s so great about Chorus?

According to the Times: “It is credited with having a toolset that allows journalists to edit and illustrate their copy in dramatic fashion, promote their work on social media, and interact with readers — all seamlessly and intuitively.”

That seamlessness is compelling enough that Reuters columnist Felix Salmon speculated it could drive the future publishing if ever released, as it now appears it might be.

“There’s a strong argument that a franchise like Business Insider belongs on a platform like Chorus,” Salmon wrote. “Business Insider is like Curbed Network in that it is pushing up against the limits of its current CMS, and faces a decision point. Should BI make a large investment in product and technology, to support its future growth? Or would that just be an exercise in reinventing the wheel, given that Chorus already exists? And while BI might be able to afford to invest heavily in technology and sales, other small-to-medium-sized blog networks, like Gothamist, as well as standalone sites like Salon, probably can’t. For them, a move to Chorus, or something like it, could be the only way to grow.” 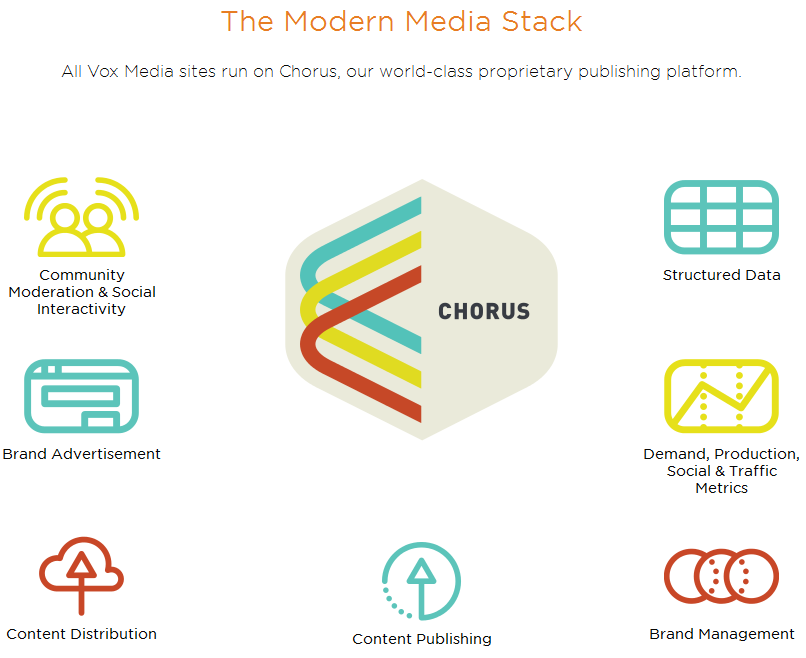 Many publishers, desperate for an upgrade from WordPress or Drupal, would likely jump on the opportunity to use Vox’s high-tech wheel instead of inventing their own. And brand publishers scrambling to catch up to the competition should also be very intrigued by a tool like Chorus, which promises to make it easy to publish in a wide range of formats, streamline workflows, and arm teams throughout their organization with the universal tools for creating awesome content.

Vox Media CEO Jim Bankoff has already said that Vox’s brand advertisers are using Chorus to create integrated marketing campaigns, and if Chorus is opened up to brand publishers, it should help them move fast—something brands are famously struggling to do.