Storytelling and Technology: The Secret Ingredients of Retail 2.0

The online “retail store” is going through an unbundling right now—all the way into the physical world, as petite concept stores, pop-up shops, and stores-within-a-store sprout up everywhere. Google, eBay, and Amazon are all hopping on the movement that’s been aptly dubbed “clicks to bricks.”

Part of these micro shops’ appeal is their ephemerality. You have to get the goods while they’re hot, or the store simply won’t exist anymore. But another big part of their allure is how brands use storytelling to stand out. Pop-up shops frequently show off a collection or a particular aspect of a brand that extends the brand’s narrative. As the Guardian recently wrote, New York concept store Story “is built on the concept of treating retail as media, curating its merchandise every month.”

Story is a leader of the “new retail experience” in another major area, too: in-store proximity marketing, or the highly personal targeted communications between retailers and shoppers via devices like iBeacon. Retailers use this new technological connectivity not only to offer deals and rewards, but also to deliver original content that tells the story of the company and its products.

Together, these two trends make up a shift sometimes called Retail 2.0, which encompasses the way in-store retail and the Internet are coming together to create a full loop of communication between consumers and retailers. As brands look to stand out and to elevate shopping above price-point comparison, stories have become a primary asset in the shopping experience.

Retail 2.0 is now making telling those stories a lot easier than in the past. As two recent campaigns highlight, content has become fundamental to the next stage in retail marketing.

Barneys’ app is one of our favorite picks. The campaign takes The Window—Barneys’ popular online content portal—and makes it central to the in-store shopping experience via your phone. 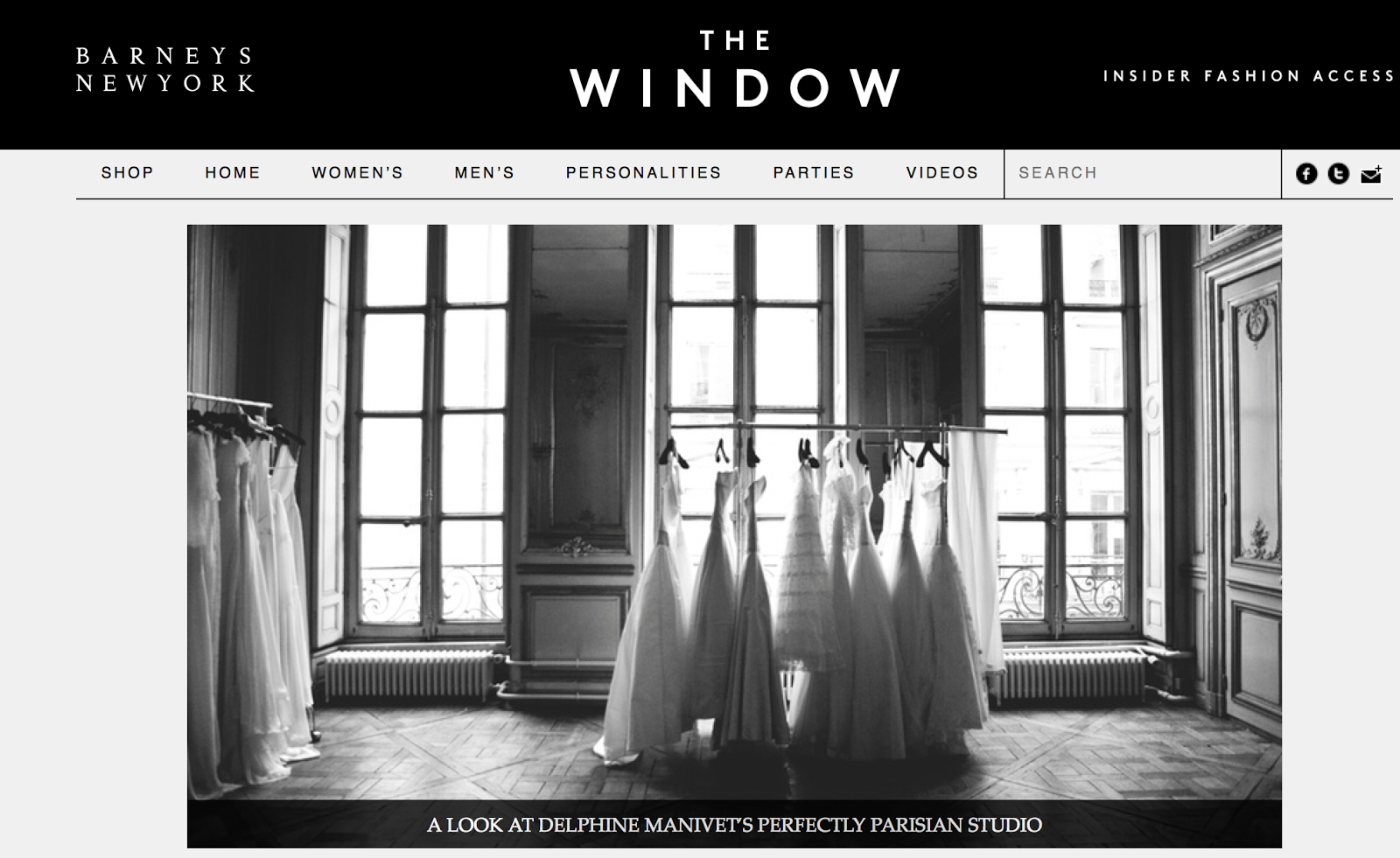 The Window’s website, seen above, is Barneys’ storytelling hub. The site features interviews with designers, news about Barneys’ on-goings, lifestyle content, and behind-the-scenes looks at the fashion industry and the processes behind the creation of Barneys clothes. Barneys excels at digital, with over 600,000 followers between Instagram and Twitter. The Window plays a crucial part in that success, feeding content to Barneys fans and serving as a gateway through which followers can learn more. 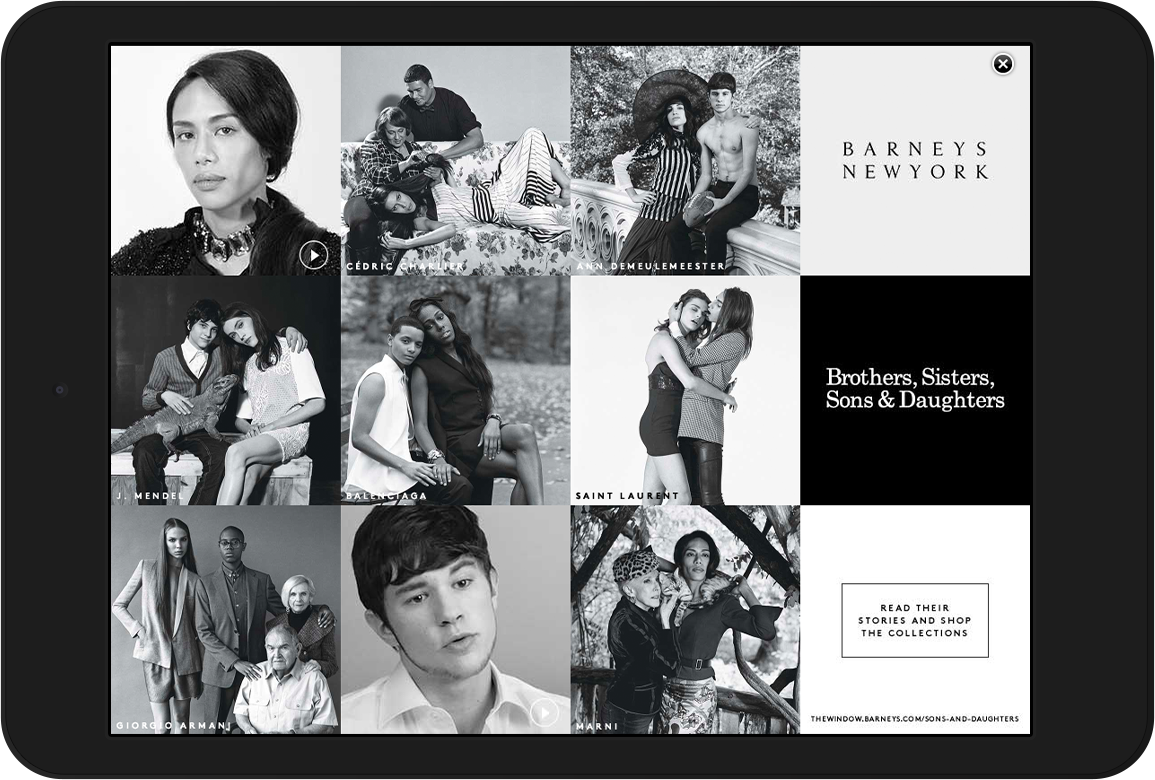 The app provides all the elements one would expect to find in a store catalogue—prices, seasonal collections, exclusive items—and adds content and other utilities that make up a high-end online retail experience. It has a scheduling tool for appointments with Barneys’ famed personal shoppers and content that brings Barneys goods to life.

Content wraps around the whole app, in fact—and it’s succeeding marvelously for Barneys thus far. Pieces like a 15-minute look into the life of a transgender photographer for the fashion industry sit alongside exclusive interviews about the making of a handbag. And readers are loving it, with engagement numbers at roughly 10 minutes per session. It’s no surprise that Barneys has declared, “Content is at the core of our brand.”

With plans to roll out in-store personalized features via the app in the near future, it looks as though Barneys will fully close the loop between physical and digital using iBeacon or other Bluetooth technology.

A recent experiment with iBeacon by a smaller brand shows why the big retailers are licking their chops at in-store communication. Jewelry store Alex & Ani used iBeacon to send content to users within a close radius of their stores; according to Inc., roughly 75 percent of recipients who received the content checked it out, and of that group 30 percent entered the store. Of that group, half made a purchase! Those are some of the highest engagement and conversion rates a retailer could dream of. So what’s the catch?

The catch is the technology isn’t quite ready for primetime, though it’s getting closer. iBeacon is built into Apple’s iOS 7, but not Android devices. It’s now available for download on Android, but still, only a fraction of Android users will receive its signals. Even still, iBeacon will reach a large amount of consumers, which has Alex & Ani racing to implement the technology in all of their stores.

The experiments of these two retailers set a clear trend for content, and they are just a drop in the bucket for the next great wave of retail marketing. Just as the quality of Barneys and Alex & Ani products set them apart from their competitors, so too does their content and technology.