This Might Be the Reason You Want a Different Job

Do you love your job? If so, statistically, you’re in the minority. Most workers are satisfied by something other than the pure love of the job. Financial and emotional considerations rank near the top. (Other factors, like seeing the fruits of our labor, solving problems, helping others, and positive reinforcement, can be more motivating than money or career potential, according to various studies.)

However, I’ve been perplexed by the sheer number of popular blog posts lately on LinkedIn and sites like Huffington Post about job quitting. Even though we’re happy and lucky to be employed in this or any economy, a whole lot of us seem to be yearning for something else.

Perhaps it’s human nature to assume that the grass is greener elsewhere, but in a study of 1,042 college-educated American workers I recently conducted, I came across two statistics that get at the root of America’s (perhaps subconscious) hunger for a different job: 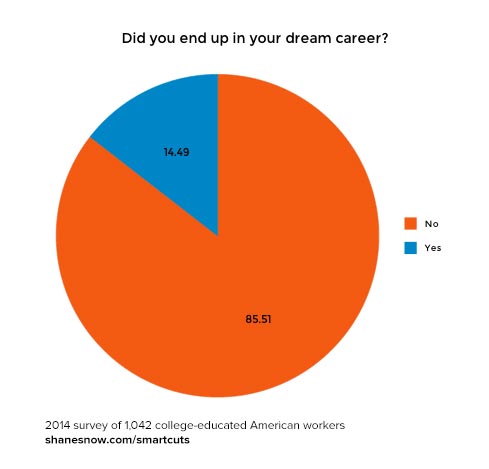 A whopping 85 percent of us aren’t doing the thing we dreamed of doing. Even if we like what we’re currently doing, there was something else that the vast majority wanted to do. That’s a discouraging figure. But more disheartening is how few of us think we can do anything about it: 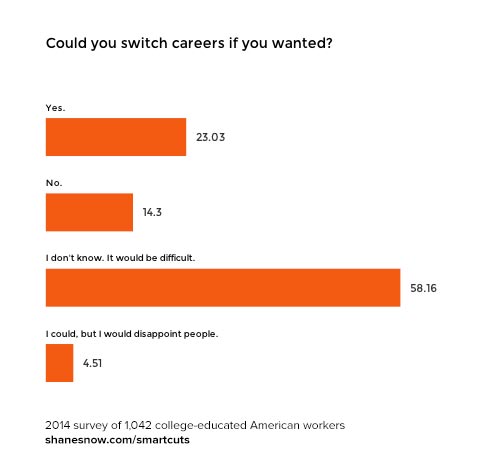 Passion is key for success

One of the main things I look for when hiring is if the candidate is passionate about what we’re doing. Just as important is whether the person is the type who’d rather change suboptimal circumstances than live with (or worse, complain about) them. At the end of the day, I’m happy to see a smart employee quit to pursue his or her real dream, so long as my company has been a meaningful a stop in the journey. But I don’t want to be a job of convenience, and I don’t want “it can’t be done” to be part of my employees’ vocabulary. That attitude starts with how one views one’s own dreams.

It shouldn’t ever be too late to make changes in life, especially in order to pursue our passion in work. It’s unfortunate how quickly we resign ourselves to situations we’re not excited about. Stats like these show that such resignation is the norm—whether we actually “resign” or just dream of it. I’ll be unpacking the rest of the study over the course of the next few weeks.