Jake Gyllenhaal’s latest movie, Nightcrawler, is not promoting itself on television. Instead, the film is being advertised in a space that is usually reserved for old futons and TVs sets—Craigslist. How? Gyllenhaal’s character, aspiring freelancer Louis Bloom, created a post in the “Jobs Wanted” section of the site, asking for work:

The page includes a link to his fictitious video resume, which turns out to be the first trailer for the film:

This guerrilla marketing campaign is far more memorable than any traditional advertisement could be. As a result, Nightcrawler is already generating buzz.

Some companies have taken this kind of advertising and perfected it, creating experiences for consumers that explode online. If you’re not up on your guerrilla marketing game, here are five of the best stunts that we’ve seen recently:

A great way to make your product memorable is to have consumers think it has magically become anthropomorphic. (Or that they’re hallucinating.) Shock Top perfects this idea by surprising liquor shoppers with a snarky, dirty-talking six-pack. Yet, the beer didn’t want to talk about how it was a talking bottle of hops, instead opting for raunchier subjects, as you’ll see in the quotes below.

The stunt was so successful, the company went on to have a talking beer tap and billboard. I’m hoping for a talking bar stool next. Butt jokes never get old.

“A real girl comes by and look at you guys—stiff and stiffer. I’m making moves!”

“I saw some tourists come through here. You could tell because he was wearing rubber shoes. He smelled like a condom.”

I’m a sucker for an ad campaign that is funny and has a good message. Burger King accomplishes both of these things with their “Proud Whopper,” which was released in one restaurant during the San Francisco Pride Week festivities. The fast food chain interviewed people and asked what they thought about gay pride. One guy said on camera: “I just don’t believe in the gay lifestyle.”

Yet homophobia didn’t stop curious customers from seeing how the Pride Whopper tasted different from the original version. Everyone had their theory—it’s sweeter, the meat is different. In reality, the burger was exactly the same.

How did customers find out that the Pride Whopper was no different from the burgers they had ordered there before? On the inside of the rainbow printed wrapper are the words, “We are all the same inside.” The stunt was planned to occur alongside BK’s new slogan: “Be Your Way.” (Group awwwww.) Customers were even seen folding up the wrappers to bring home with them, a clear sign the campaign was an experience that people wanted to remember.

“It really does taste different. You don’t taste it?”

If you want to get the most attention for your brand, one of the best places to go is Grand Central Station. After all, over 500,000 people make their way through its vast halls on a daily basis. And they’re tired. And they want to home. So what do you give them? The next best thing—a luxurious place to lounge before they catch the next train to New Haven.

Target did just that. They paired up with the ad agency Deutsch to create a two-story, 1,540-square-foot home in the middle of Vanderbilt Hall, featuring their new home collection, Threshold. Commuters could grab a book to read, take a nap on a couch, or even use the bathroom—which in itself makes the campaign memorable if you’ve ever seen Grand Central’s restroom lines.

Check out the time lapse video above to see how it all happened.

Holy smokes, this ad is genius (#sorry). Ogilvy secretly filmed a small, adorable child asking various smokers for a light. As you would expect, the adults are horrified and remind the youngster of all of the negative side effects of smoking, which gives the ad a kind of sad irony.

According to Adweek, the quit smoking hotline in the commercial had a forty percent increase in calls after the PSA aired. That’s a great reason for this ad to get way more views than it has—go ahead and share it!

Over the past few weeks the world has been caught up in a soccer frenzy, and companies were smart to take advantage of the situation. Bars had extended mid-day happy hours to draw in customers, clothing stores brought out anything they had in patriotic colors, and Audi? Well, Audi made a giant scoreboard in Brooklyn out of Audi A8s. 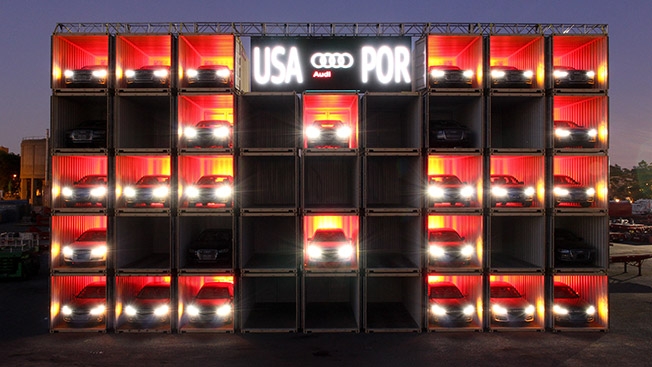 Needless to say, the task was not easy, especially in New York City. Audi had to find a place where their scoreboard would be highly visible, and would be able to fit 45 intermodal shipping containers. Of course, I’m sure Brooklynites were happy that they didn’t have to venture into the nearest over-capacity packed bar to find out the score and kept busy brainstorming how to convert the scoreboard into some sick loft housing.