Despite the Haters, Wendy’s and Boyz II Men’s #PretzelLoveSongs Is a Content Marketing Hit

When I think about boy bands, I think of the days when I kissed every magazine cover that Justin Timberlake graced his face with. (I was also seven years old. Promise.) Yet despite all my fond NSYNC memories, I never associated boy bands with pretzels—until now.

Last Friday, Wendy’s and Boyz II Men paired up to create a ballad about the chain’s limited edition pretzel bun. Not gonna lie, it’s been stuck in my head for the entire day. I’m a sucker for crooners in suits.

As the Boyz explained in a statement released by Wendy’s, “We know all about romance, heartache, love lost and found, but we have never had the chance to sing sweet harmonies about, of all things, a pretzel bun.”

If that isn’t weird enough, the lyrics are composed entirely of tweets from Wendy’s fans. Before I go any further, you’re going to want to check the video out for yourself.

Since last Friday, the video has garnered nearly a million views, and for good reason. Not only is the clip funny, but it also smartly integrates user-generated content. The inclusion of real tweets highlights how many people are excited for the limited-edition pretzel bun. And to top it all off, “Wendy’s Pretzel Love Song” takes advantage of the intense nostalgia that all millennials have for the ’90s. I personally haven’t had a burger, pretzel bun or otherwise, in a long time, but I still found myself sharing this video for old time’s sake, infected by the boy-band fever that gripped me in my younger years. I might have even sung “om nom nom” to myself a few times today.

However, “Yes! Yes! Yes!” isn’t the only love song that the fast food chain has released. On July 2, another baked-good-inspired song was posted by Wendy’s called “Desire,” which has earned nearly 900,000 YouTube views in its own right:

Clearly, there’s a lot of love going around for Wendy’s pretzels buns. Yet, just like all things that are pure and good on the Internet, some haters are going to come out of the woodwork. Wendy’s started and promoted the hashtag #PretzelLoveSongs for the videos, and some people didn’t take to it well—particularly notorious brand troll Jon Hendren, aka @fart.

Thumbs up to the guy who—I’m sure completely genuinely—thinks, “It’s cool when brands engage me”: 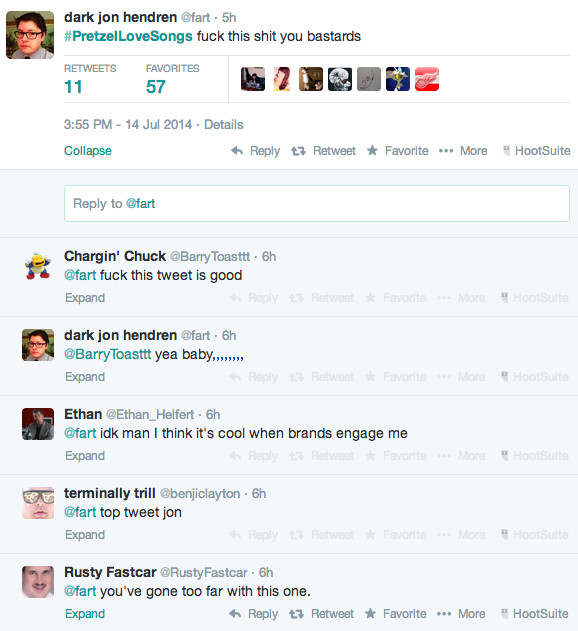 Despite some people drinking the pretzel-flavored haterade, Wendy’s is doing a great job spreading the gospel of their limited-edition buns. Other companies knead to take note: Don’t be afraid to make fun of yourself, interact with your audience, and use boy bands shamelessly. That’s the true, salty recipe for successful branded content.