Can LinkedIn Help Barbie Reinvent Herself for 2014?

Barbie can’t stay away from the criticism: She’s unrealistically thin, she’s not diverse enough, and she’s too materialistic. In fact, the Barbie rebellion has gotten so out of hand that Mattel’s stock shares are rapidly sinking; it’s too bad Mattel never gave her experience as a Wall Street hype woman.

In order to combat this backlash, Mattel decided to highlight Barbie’s one asset that blows everything else in the toy aisle out of the water: her jam-packed résumé. And now she has a LinkedIn to show it off. After only a few weeks, Entrepreneur Barbie has managed to garner over 5,000 followers. That’s right—a hunk of plastic is more popular than you. (To be fair, she has held over 150 jobs in the past 55 years. Girl’s got a lot of connections.) 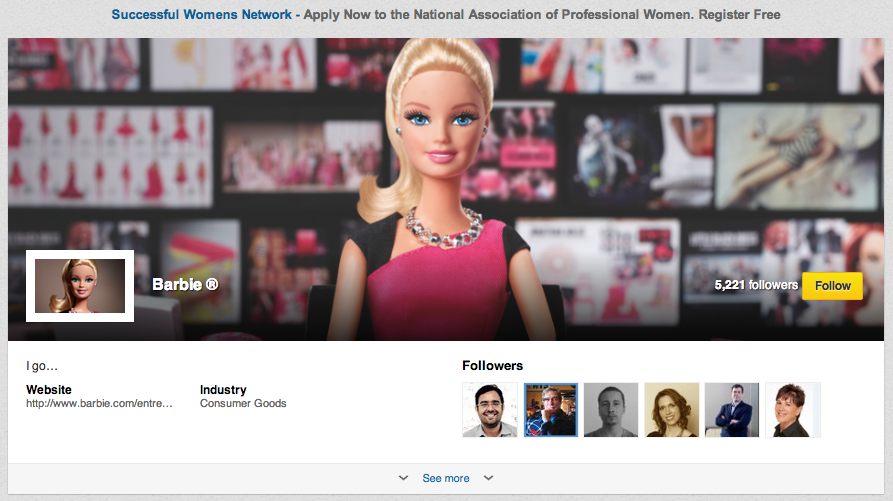 Still, will Barbie’s new social media presence be enough to combat her decrease in sales? After all, there appears to be a glaring flaw in the campaign: Preteen girls—Barbie’s target demographic—aren’t on LinkedIn. In fact, two-thirds of the platform’s users are over the age of 35. As a result, it’s clear that Barbie’s online résumé is directed towards adults who feel like the doll is not a good role model. Some might even be moms who grew up with Barbie dolls, but passed on buying one for their daughters amidst a slew of concerns. The question is: Can Entrepreneur Barbie change their negative attitudes about the toy?

To help matters, the Barbie site even has an actual female entrepreneur backing their product. Jennifer Fleiss, co-founder of Rent the Runway, says that Barbie is “my idea of a go-getter girl and has encouraged me to believe that women can have it all: a career, a family and a great wardrobe.”

Sarah Gray from Salon is also in favor of the new, modern-day Barbie. In her opinion, “Girls must see that it’s not just men who can make it in these fields—from being a developer, to starting a company. Entrepreneur Barbie may not be the ideal role model, but she’s at least a visible figure, starting her own vague, make-believe multi-million-dollar company.”

“Barbie” even posts a series of articles on LinkedIn that encourage female leadership in the workplace, making this a truly unique mashup of B2B and B2C marketing. Her page features posts about choosing a mentor, real-life businesswomen, and the importance of learning to code. Of course, the impact that these articles can make on little girls is limited, to say the least. Eight-year-olds aren’t reading Barbie’s posts about résumé-building. They are, however, seeing an image of a businesswoman that presents herself like this: 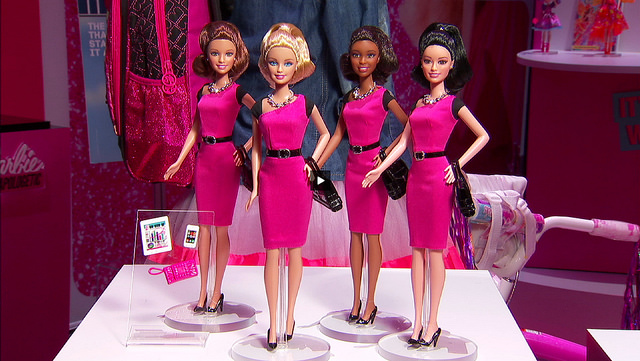 It’s important to keep this Barbie controversy in perspective. It’s clear that Mattel is trying to do a positive thing by encouraging women to be leaders (albeit always in bright pink). In addition, while Barbie does have the power to influence the way girls perceive the world, she’s not the only toy in the toy box.

As M.J. Rose, founder of AuthorBuzz.com, told me, “Yes, I played with a doll that had a ridiculous body and plastic face. But I also played with paints and crayons and puzzles and Monopoly and a Ouija board and read books like crazy. Did Barbie have a bad influence on me? Well, I never had a boob job or became a lunatic clothes horse… but I did become an ad exec and a writer.”

The Content Strategist is Contently’s brand story. What’s yours? Let us help you find the answer.