Engagement metrics are, and will continue to be, the best way to measure how the public feels about your content. But sometimes, Excel feels like a prison with all those cramped cells. A much easier metric: Has anyone made a parody video about your brand’s content?

After all, imitation is the highest form of flattery, right?

Let’s start with this parody of the branded video genre from Dissolve, a stock footage company. The clip totally nails the video content clichés with a satirical voiceover: “Check out this wind energy thing in Indiana. And this blue collar guy with dirt on his face.” The video also includes imagery like time-lapsed city traffic, powerful rushing water, and scientists with beakers, while also bluntly noting that each minority’s inclusion in the spoof was carefully planned. It’s funny because it’s so, so true.

If you work at an agency, try to resist the urge to quit your job upon completion.

Dove’s followed up their “Sketches” campaign (which we’ve written about) with “Patches,” a film that scored 20 million pageviews and some justified ribbing, too, since its concept is a bit corny. Women were told to wear beauty patches to help transform how they see themselves. The big kicker? The patches were placebos that helped them discover their inner confidence.

Unilever was practically asking for a comedy troupe like Above Average to create a parody. The #TRUEBEAUTY Dove Mirror Test spoof shows no mercy.

By now, you’ve probably seen WREN’s “First Kiss” video, which, as reported in Business2Community, helped grow sales for the fashion company by 13,600 percent. That’s a lot of math. The black-and-white footage, which shows couples kissing after supposedly meeting for the first time, is an easy target since it doesn’t require any fancy effects to recreate—just an empty studio and actors.

Co.Create lists a number of “First Kiss” parodies including ones for pet lovers and Minecraft players. However, the cleverest clip comes from Snog, a British frozen yogurt brand, that shows couples “snogging” for the first time. Capitalizing on WREN’s viral success, the brand’s parody video has amassed over 97,000 views thus far. 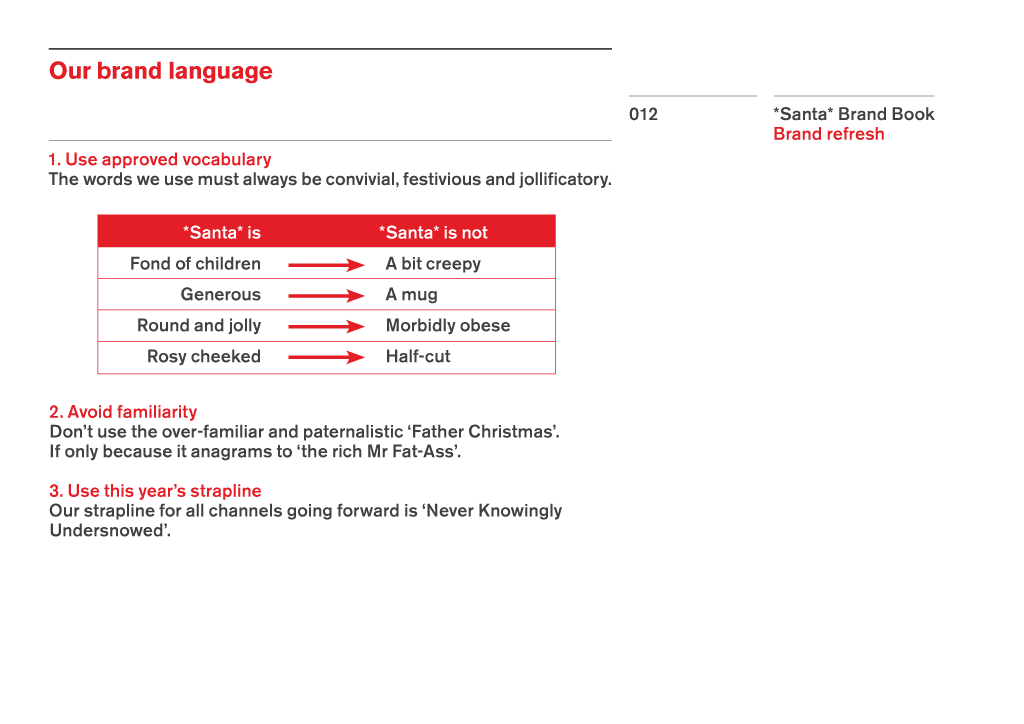 If you’ve ever worked at an agency, you probably never want to see a brand book again. UK agency The Quiet Room embraced that loathing by creating a brand book for Santa’s rebranding, spoofing the origins of pretty much every piece of content marketing ever made in the process.

As FastCo.Design says, “For marketing and branding nerds with a sense of humor, the *Santa* Brand Book is the gift that just keeps on giving.”

What are some of your favorite content marketing parodies? Let us know @Contently and we’ll probably write about them soon enough.