But you probably don’t know that American Express has been a master content marketer for close to a century, ever since they were a company we would barely recognize today. When American Express was founded in 1850, they provided an express courier service that delivered valuables throughout upstate New York. By 1891, they started offering traveler’s checks. But how did American Express evolve into the company we know today?

Everything changed in 1915 when American Express added a travel agency service. From that point on, the brand was all about travel, with AmEx referring to itself as “the world’s largest travel company” or “the company for people who travel.” The natural progression, at least in terms of publishing, was to create travel guides. Here are some examples of short travel brochures produced during the early years of American Express:

These brochures contained tourist spots, travel tips, and—just like modern content marketing efforts—they stressed the importance of American Express services for travelers, as well as highlighting the addresses of the company’s local offices. In the 1950 edition of the Information Please Almanac, American Express contributed heavily to a special vacation travel section in a way that’s very similar to the sponsored content stories we see today. It contained profiles of vacation hot spots in cities around the world, with the addresses of local American Express branches placed conveniently at the end.

American Express also eventually committed to printing their own, longer, more detailed guides. In 1967 they started publishing the American Express Travelers Guide, intended for highway travelers. These guides contained detailed maps, descriptions of communities along routes, lists of tourist sights, restaurants, accommodations, and recreation areas. Despite a rich history of publishing in the travel market, it wasn’t until 1969—after they bought a camera magazine company—that American Express grew out of their short travel brochures and moved on to have a full-fledged publishing arm.

From short brochures to glossy magazines

In 1968 American Express bought the U.S. Camera Publishing Co., which produced a few camera magazines, and, more importantly, the monthly travel magazine U.S. Camera and Travel. Unlike American Express’ previous publishing ventures, this magazine was subscription-based, provided regular advertising slots, and was a business in itself. It also offered a place to promote the brand’s financial products. And in turn, their financial products led consumers to the magazine.

“We want to get this magazine restructured and have the finest travel magazine in the market,” said James Henderson, head of the American Express publishing division, in an interview with The New York Times in 1969. To drive up subscriptions, American Express rebranded the magazine as Travel and Camera, and pushed through with an intensive, 30-day, direct mail campaign sent to the 1.8 million homes that were enrolled into their credit card services.

Within the year, the magazine became the highest selling travel magazine on newsstands. Three years later, they renamed the publication to Travel + Leisure, which is still being published today. 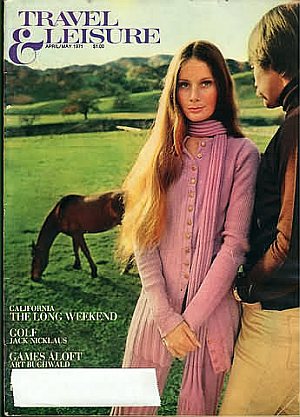 Throughout the decades, American Express also launched other magazine titles in the travel and lifestyle genre, such as Departures, Food & Wine, and Executive Travel.

Though American Express still provides travel-related services such as traveler’s checks, and touts the travel perks associated with their credit and debit cards, it’s no longer a primary focus.

Early in 1993, American Express started taking a hands-off approach to their magazines, entering into an agreement that allowed Time Inc. to take on the responsibilities of managing and improving the profits of the American Express magazines. This management agreement foreshadowed events to come ten years down the line. In October 2013, American Express sold their publishing arm, American Express Publishing Corp., to TIME Inc. The sale included the magazines Travel + Leisure, Food & Wine, Departures, and Executive Travel—the very publications that American Express had been releasing for decades to reach a targeted market of high-income travelers.

This wasn’t an abandonment of their content marketing efforts, but a retooling. In 2007, American Express had launched the OPEN Forum, an online hub filled with advice from experts to help small business owners succeed with their marketing, hiring, and growth. Readers can also send in questions that the experts or the OPEN Forum community can help them answer. Because of its interactive, informative nature, the OPEN Forum website is often cited as a case study example of content marketing done right. And by the time they sold American Express Publishing in 2013, they were reaching millions of people each month through OPEN Forum.

While most of American Express’ publishing efforts are now history, their legacy just shows us that content marketing is about attitude and approach, not a specific medium. By starting small, like American Express did with their short brochures, and by adjusting to changing times, perhaps modern brand publishers will find themselves leaving an impression so strong that it withstands a century of evolving media.