Sharknado 2: The Second One won’t air on Syfy until July, but reporters are already covering its New York filming ventures with bated breath. This is the kind of earned media usually reserved for high-end productions with major stars, but in 2014, a social media machine like Sharknado is proving just as sensational.

So how did Syfy create a social media tornado that’s lasted long after the initial storm of press passed? Let’s take a look.

The memes. Oh, the memes! To start, first Sharknado poster was tailor-made to generate online buzz.

Tornadoes, sharks and chainsaws all rank high in the pop culture zeitgeist. How could anyone resist sharing that scene in which Ian Zaring is swallowed whole by a flying shark and saves himself by cutting his way out with a chainsaw? Syfy recognized this, and they released the absolutely ridiculous scene early, whetting appetites across the web.

“There was a tongue-planted-firmly-in-cheek tone to the social conversation,” said Michael Engleman, EVP marketing, digital and global brand strategy for Syfy and Chiller. “We released an enormous war chest of assets that embraced the humor, were highly consumable, and easy to iterate on in terms of creating fan memes and fan GIFs.”

“That was the fuel we poured on the fire,” he continued. “You need assets that are stop-in-your-tracks arresting that will cut through the clutter.”

Though Engleman’s team had been dishing out explosive Sharknado content, they didn’t fully realize the opportunity at hand until a month prior to the July 2013 premier. The Internet was buzzing. Sharknado was creating that rare spark.

Syfy was ready with an attack plan. In the 48 hours leading up to the inaugural broadcast, the cable channel’s content leaders released a flood of assets through social networks. They also sent “shark-bitten street teams” — people in lifeguard outfits with bites taken out of their surfboards — to ComicCon 2013, earning serious press in tech, business and fan pubs.

“We pulled together a war room of social media experts, brand marketers and creative folks to think about how we could activate and engage the consumer and have a two-way dialogue. We quickly greenlit Sharknado 2 and worked with [ad agency] Fallon to announce a Twitter contest allowing fans to name it,” Engleman recalls.

The Syfy team was also listening closely to their Twitter analytics. “Social media is like showing up at a cocktail party with something terrific to say, but if you say it to the wrong group of people, they will find it boring,” Engleman explains. “And that’s where analytics comes in.”

Along with social media agency MXM, the Syfy team paid close attention to which content was resonating, and then exploited those opportunities.

“We need to have our ear to the ground and be thoughtful about how people are perceiving our content and how they’re talking about it within their own social sphere,” Says Engleman, “If we do that, we can get to a place where we understand what’s worth sharing. Our fans will tell us.”

Betting on a repeat

Not only was Syfy ready with promotional engagement, but after the movie finally aired, they capitalized on the excitement with an encore telecast two weeks later. Viewership jumped 38 percent and that second showing was the top-tweeted cable program that night.

Will the third time, in the form of Sharknado 2, be even hotter? We’d say so: People are literally dreaming about the sequel. 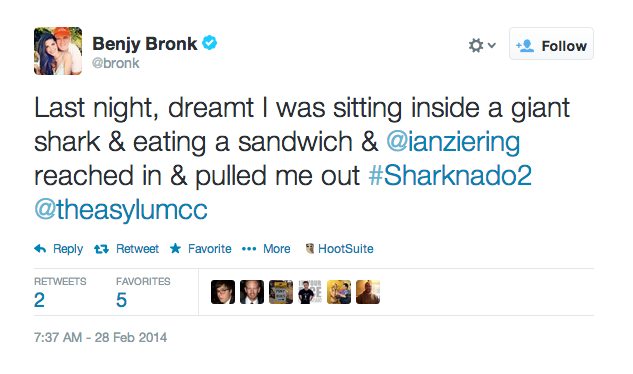