Tired of WordPress? Give Into Ghost

Ghost, a new content management system that concentrates on the simplicity of publishing, isn’t ringing with bells and whistles. Even The British developers who built it modestly refer to it as “just a blogging platform.” But don’t let the modesty fool you.

Ghost stands in stark contrast to the powerful yet bloated WordPress beast. It’s also cleaner and easier to use than Joomla, Drupal, or any number of other bespoke CMS you can think of. But what can a system so minimal offer publishers and content creators?

A study by the The Guardian identified 2013 as the breakthrough year for mobile devices, with 50 percent of users now accessing the web exclusively on phones and tablets. Ghost caters to that approach with a standard, single-column format optimized for reading on the move.

Like WordPress, Ghost comes in two flavors. There’s a hosted version with subscription costs that scale according to your traffic needs (between $5 and $80). There’s also a free download of the source code that you can deploy to your own servers.

Behind the scenes, your Ghost blog is managed almost entirely in one split window. One pane lists the published content. A second, larger pane previews content. Editing also relies on split panes consisting of editing view and a preview screen. Site settings and options are handled through a series of highly focused menus, unlike WordPress, which uses separate menu items and editors for Posts and Pages. In Ghost, you just tick a box to switch a post to a static page.

Here’s an example below: 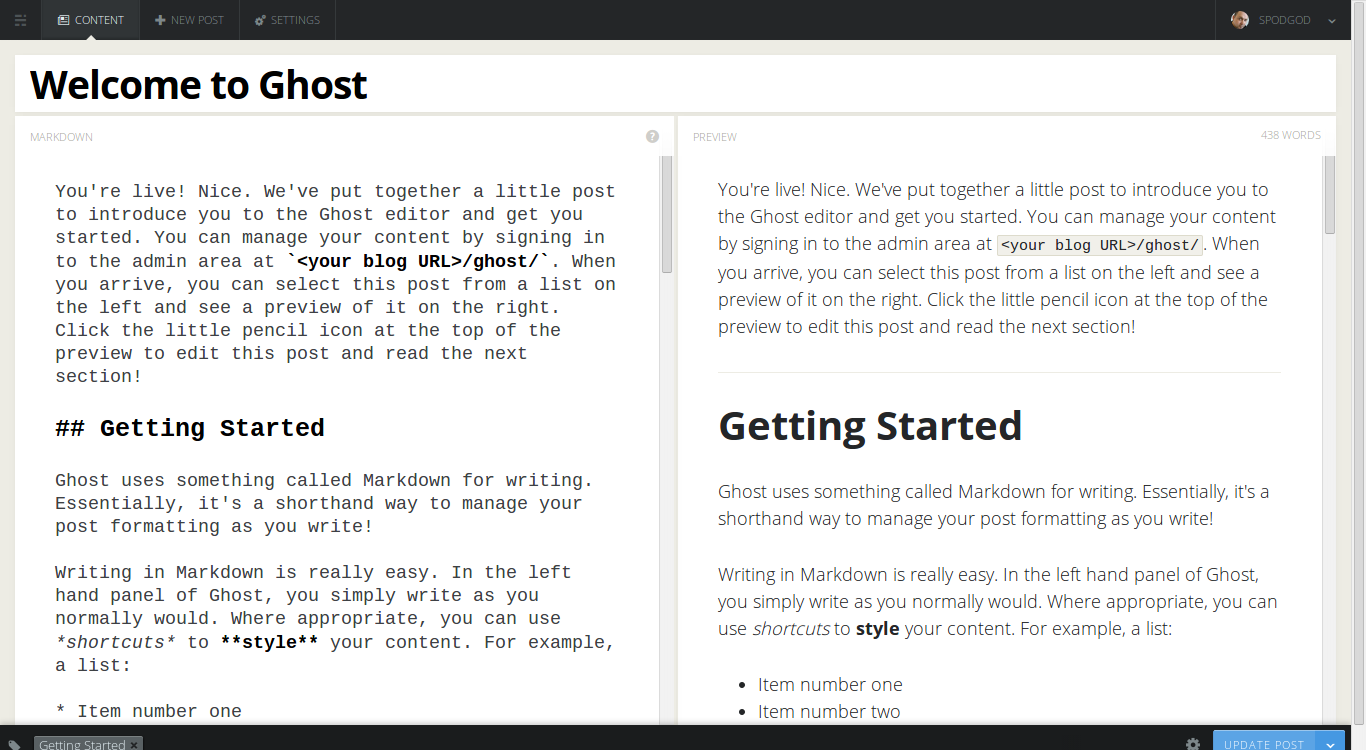 In WordPress, the media storage capability has warped over the years into a complicated Media Gallery, supporting audio, video PDFs, and images. But increasingly, there’s less need for these options if external services can store media. Ghost only connects with SoundCloud for audio, Vimeo and YouTube for video, and Imgur and Flickr for images.

But simplicity doesn’t mean Ghost lacks flexibility. There’s a commitment to supporting web-savvy users through compliance with standard formatting tools and libraries like Handlebars for templating, and markdown for text formatting.

Ghost also provides full inline-support for HTML in both the hosted and source code versions. Anyone who has struggled to embed content with the hosted version of WordPress will understand how important that is. 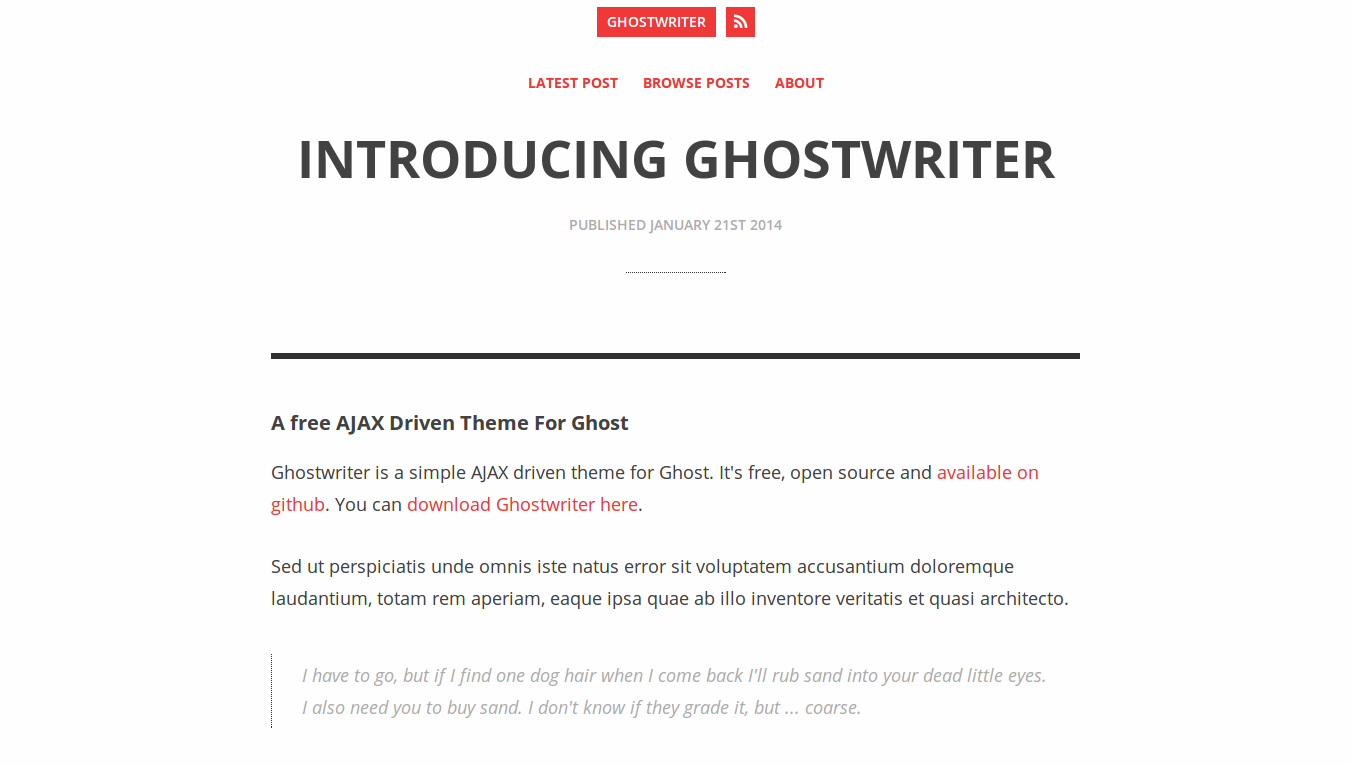 When asked about powerhouse publishers that use Ghost, the company’s team continues to play their cards close to the chest.

“We’re aware of a number of major publishers, large organizations, and influential authors who are experimenting with Ghost,” says John O’Nolan, an ex-WordPress UI developer who had the initial idea for the project, “I can’t talk about all of them at present — but notable backers of the Kickstarter campaign included Tucker Max (I Hope They Serve Beer in Hell, Lion Crest Publishing), Seth Godin (Purple Cow, Tribes, The Dip) and Leo Babauta (Zen Habits).”

Aside from the famous names, early Ghost adopters have enthusiastically signed on to the sleek platform, but still expect it to improve. “I love how Ghost looks,” says Troy Bombardia, author of the volunteer support site Ghost for Beginners. “However, there are some features that are missing. A native menu bar, sidebar, etc.”

Since Ghost is still raw, other features like social media integration are still missing in these early stages. Updates are planned in the platform’s roadmap, but if you want any of these missing features right away, you’ll have to roll your own.

Conversely, the decision to concentrate on script and mark-up support instead of single buttons means just about any feature you want can be coded in, no plug-in required. Need Google Analytics? Embed the code directly into your templates. Want LinkedIn, Facebook and Twitter badges? Hack them into the template yourself. If publishers know what they’re doing, Ghost can be more powerful than old school CMS.

In fact, the biggest feature flagged in the roadmap, but yet to be implemented, is the ability to bolt together “apps.” These will be plug-in style modules that add features like comments, sidebars and social media, all using common UI components.

We wouldn’t recommend dumping a ten-year WordPress archive into Ghost right now, but we would suggest taking a look. It’s a system that coding-savvy publishers will be able to bend to their will using established and well-documented frameworks. Ghost may be “just a blogging platform,” but depending on what you need, simplicity can be the ultimate sophistication.