For decades, getting homeowners to see the light when it comes to energy efficiency has been a knock-down, drag-out fight for utilities and non-profits.

“Everyone thinks their energy bills are too high, but the fault is usually misplaced,” said Selma Tucker of Michigan Saves. “Typically, consumers will blame the Middle East, or the president, or Congress or the utility company. It’s seldom they blame themselves.”

That’s even though — sorry, people — it’s usually their own faults. Rather than wrestling for the public’s attention, Michigan Savesdecided to take the fight where it belongs—inside customer homes,launching the Avoid Energy Drama campaign to do exactly that. With a lot of humor and a bit of chiding, Michigan Saves is hoping to inspire residents to action.

Taking a jab at consumers

The campaign, hosted on the microsite AvoidEnergyDrama.com, features a series of boxing parody videos about a couple arguing over the thermostat and window sealings. The bouts are even mediated by a tuxedoed announcer with a suspended microphone and a ringside bell.

“We wanted it to be something that everyone could relate to but also showed our silliness around energy efficiency,” Tucker said.

To pull off the campaign, Michigan Saves partnered with sustainability marketing firm Shelton Group, as well as a number of statewide energy-related utilities. The partnership with the utilities was a strategic one. While public utilities are just as interested in energy efficiency as Michigan Saves, they are easy targets for people looking for someone to blame for expensive energy bills. However, a mild-mannered non-profit at the helm gives the campaign more freedom to gently point the finger at consumers’ inefficiency .

“This campaign was devised with Michigan Saves on top because we can take some more risks,” said Tucker. “But there are four of us, so there isn’t one brand that bears the brunt of the risk. There is nothing offensive here, but we did want to shock people a little bit.”

Because, after all, we’re talking about changing shower heads and caulking windowpanes here. If the content isn’t interesting, no one is going to care about caulking.

Across every channel — and into reality

AvoidEnergyDrama.com may be the campaign’s home base, but a wave of external content — including video, audio clips, banners and other static ads — was released into the the world mid-January to increase traffic. With the social effort still in its infancy, content is being pushed through online ads, television stations, YouTube and even Pandora.

“So far we’re really pleased at the response from TV stations,” said Tucker. “TV stations are approached a lot for PSAs, but sometimes the campaigns can be a little flat. If they’re going to give that time away for free, they’re going to want something cool.”

And since they have something cool, Michigan Saves is also planning to push the campaign through a channel most PSAs overlook: in-person. The Energy Drama announcer will take the show on the road to local sporting events, schools and other community spaces to give the message right to the public.

The goals of Avoid Energy Drama are tall for a small non-profit. Michigan Saves hopes to educate three million Michigan residents on their energy problems and inspire 175,000 of them to take action.

How does funny content turn into serious action? From the moment a visitor arrives at the microsite, she is exactly two clicks away from local energy efficiency resources, prompted by a series of engaging, “What’s your energy drama?” questions. 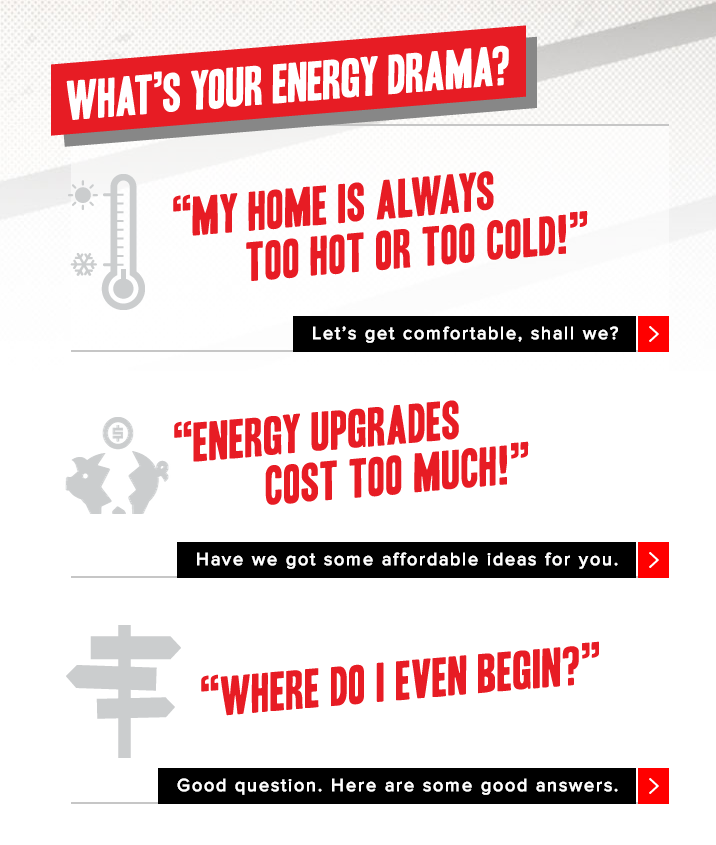 “We tried to create something that is easy for our customers to engage with,” added Tucker. “We were very intentional in trying to get people to turn their interest into action.”

Thus far, the success of Avoid Energy Drama is difficult to measure, but they’ve already been picked up by the WSJ, industry publications and local news in Michigan.Tucker hopes the positive reaction he’s received from television stations about the PSA will soon ripple through the digital public — even as the campaign points the finger directly at them.