The Types of Companies That Benefit Most from Content Marketing

I was traveling alone in Portland, Oregon, the summer Red Bull sponsored a flugtag (German for airshow). People were building quirky aircrafts and launching themselves off a pier onto a giant, inflatable cushion emblazoned with the energy drink logo, and locals were psyched.

“What are you talking about?” I’d say to every bartender or Lyft driver or artisanal ice cream entrepreneur who asked if I was going to the flugtag—this was Portland, after all.

Though I was still years from accepting a job in content marketing, I got a mini-education in the field each time someone brought up the stunt. It wasn’t as crazy as Stratos, everyone said, but Red Bull was helping to “Keep Portland Weird” with the marketing stunt. Though the scaffolding was obvious—it was impossible to talk about the air show without mentioning the brand by name—no one really seemed to care. If anything, they respected Red Bull’s candor.

At the time, I wondered how much money the brand was actually going to make on the stunt. Would it make any difference? (Most likely.) Was there a catch? (No.)

Now, most companies want to be like Red Bull. But we often hear from clients and prospects that their products and services don’t feel as conducive to big, viral stunt marketing like Red Bull. They see consumer-facing brands working in exciting areas like retail, beauty, and food, and many clients think, “Content works for companies like that.”

But Red Bull didn’t build its reputation just by being cool or extreme. The marketing efforts worked because the brand’s purpose aligned with what consumers wanted. That style of content marketing was also unheard of at the time.

There are a ton of companies out there waiting to benefit from content marketing, and most of them don’t sell exciting energy drinks. Here are four types of brands that can benefit the most.

Five years ago, a lot of companies were just creating content without a plan. Today, with so many helpful guides on tactics and strategy available, brands new to content marketing have more of a roadmap for success.

If you’re a marketer starting a new content initiative, you’re in a fantastic position to build a relationship with your target audience. As you’re developing a strategy, you’ll be able to see what your competitors have already done and where you can stand out.

Take California Closets, for example. The company could have aligned itself with bargain retailers in the industry, but by going all in on a new print magazine, Ideas of Order, it attracted an audience searching for high-end, luxury closet organization. It’s clear from the content that they’re not selling ugly plastic tubs for college students. 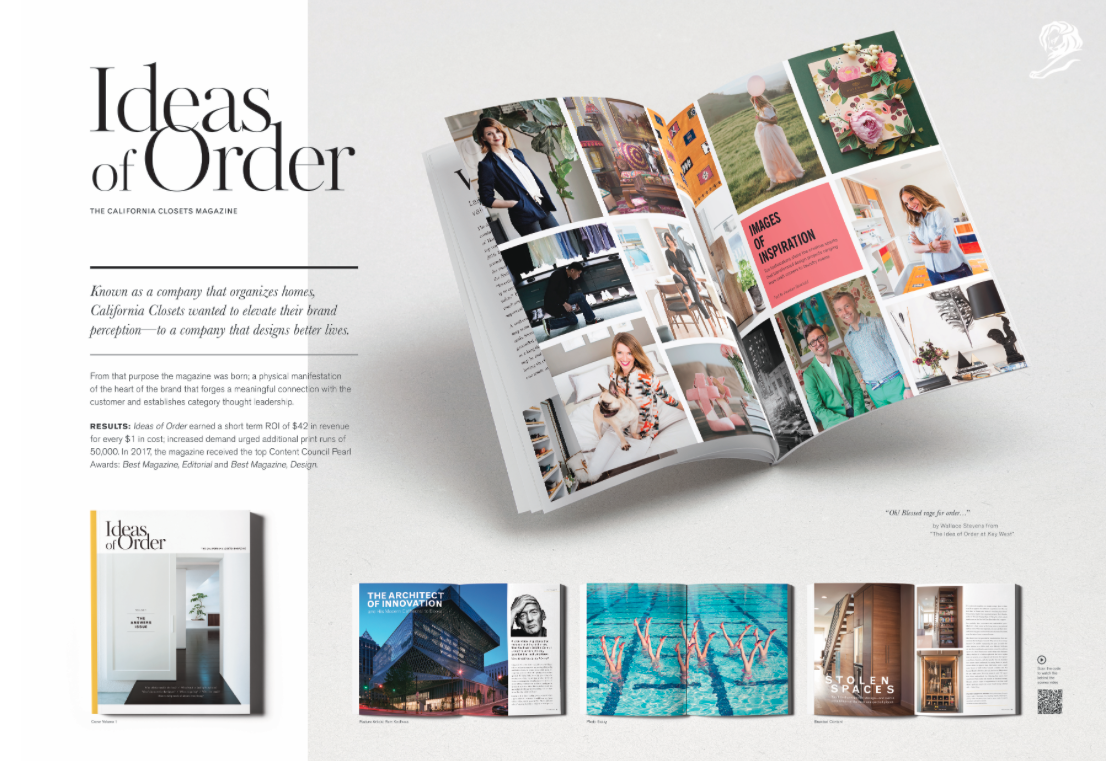 At Content Marketing World, the magazine won awards for Best New Print Publication and Project of the Year. As Stephanie Stahl pointed out on CMI’s blog, after only a month, Ideas of Order had already driven $42 in revenue for every dollar California Closets spent producing and distributing it.

A company with something to prove

Maybe your company sells a taboo product (Poo-Pourri). Or maybe your CEO has just stepped down after a series of unfortunate controversies (Uber). Maybe you’re trying to disrupt an industry and you need to convince customers to change their habits (Netflix). Look at those core challenges as a blessing. They give you the conflict you need to tell a good story.

Now, a brand doesn’t have to be in “damage control” mode to break into content marketing. But correcting a misconception in the market can be a nice place to inject some honesty or even humor. Your brand might benefit from a funny, informative video about what you do, or you could always write blog posts to set the record straight about something in the press.

One recent example of a brand side-stepping a silly product with humorous content is Steak-umm launching a rebirth on Twitter. “[Young people] might have an inkling of [our] name in their mind, but they’ve never actually seen it advertised in a modern context,” Steak-Umm’s social media manager Nathan Allebach recently told us, “So we have that innate advantage working on social, which lets us [try to be] goofy and kind of ‘out there’ with the brand.”

Expansions can take many forms, but no matter what you’re rolling out, content can bolster the effect it has on the market. If you’re a European financial brand expanding into Asia, you’ll want transcreated content lining the runway when you arrive.

The last thing a marketer wants to hear from potential customers is, “Wow, I know your company, but I had no idea you guys did this too.” You’ll need well-crafted stories to prove that you understand your new market.

If you’re a Manhattanite, for example, you’re probably familiar with the men’s health company Hims. Their tongue-in-cheek, stylized subway ads were ubiquitous last summer. When Hims announced they were launching a brand of vitamins and medications for women, appropriately called Hers, it seemed like an obvious move.

The Hers product line was accompanied by a new branded blog called Savoir Vivre. The Hims blog, Savoir Faire, features content about sleep deprivation, menswear, acne, and cholesterol. The Hers blog, in contrast, is hyper-focused on women’s sexuality, which matches the brand’s primary product offering for women: prescription medication Addyi. You can see the adjustments strategists made mo the Hims/Hers copy before the women’s line launched. It’s clear the brand concluded that women were more accustomed to reading about sexual health, so they were able to skip the innuendo.

Still, the playful tone is obvious on the blogs. “it’s french,” both homepages read, “say it how it’s supposed to be said. it’ll make your mouth feel funny.”

A company solving a complex problem

Some companies just can’t cram their product marketing and brand messaging into 30-second ads. The rise of content marketing has benefitted these brands significantly, giving them enough space to answer complicated questions and address pain points that can’t be summed up with 8 words in a banner ad.

Whether you’re B2B or B2C, informative content doesn’t have to be dry. We tell clients and prospects in B2B industries that they’re still marketing to people. C-suite executives with purchasing power still need to be educated and entertained.

That’s the driving force behind everything we create on The Content Strategist. We don’t want to rely on overt promotion to sell our product. Instead, we want to answer questions about thought leadership, content strategy, and the ROI of video marketing. Without the freedom to talk through that complex story on our blog, I just don’t know how I’d explain it.

Content marketing, it turns out, is a discipline best used by marketers who have a lot to say.