‘Beyond the iPhone,’ And 6 Other Stories You Should Read

The New Yorker: Pete Wells Has His Knives Out

I hate that I’m writing these words, but critics are the proto-influencers. Before we went to Rotten Tomatoes to find out whether a film was objectively good or bad according to the internet hivemind, we’d pick up the most recent issue of The New Yorker in our mom’s therapist’s waiting room and flip to Richard Brody’s review of a movie that was playing in two theaters in all of New York. I assume this experience is universal.

But it seems that as my access to Richard Brody’s opinions has increased—now you can just go to The New Yorker’s website instead of taking the F to 75th Avenue and walking a couple blocks to where my mom went to therapy—his influence has decreased.

Now, it doesn’t matter if Richard Brody liked Suicide Squad—it’s gonna make hundreds of millions of dollars anyway. Yet while it seems that every other critics’ cultural cache has been subsumed by the aggregate opinions of random people boiled down to number between 0 and 100, The New York Times’s leading food critic Pete Wells remains an almost singular arbiter of good taste.

This profile on the most powerful man in food doesn’t just explore how he feels about his awesome critical responsibilities, but invites us to spend some nights dining with him ourselves. He compares his negative reviews to a bullet in a gun—and here we get to find out more about the man pulling the trigger.

I love the bookstore, but I’m not always faithful. I enjoy going to the independent store a few blocks from my place and do it as much as I can, but Amazon is too attractive with its prices and shipping. It’s too smart. It knows how to do everything in the most efficient way possible. It gives me what I want without any hassle. Prime is basically an aphrodisiac to consumers. And soon, while we’re all too busy being seduced, it’s going to take over the world.

The only real roadblock in its way is shipping. But that could be changing, thanks to some covert operations that should scare UPS and FedEx. This Bloomberg article goes into those operations and makes a case for why one of the world’s most powerful businesses is ready to get more powerful.

Whoever thought that targeted advertising could prevent the recruiting efforts of extremist groups?

Google’s incubator, Jigsaw (previously known as Google Ideas), is working on a program that targets aspiring ISIS recruits, redirecting and reeducating them. It places advertising alongside results for any keywords and phrases that Google has determined recruits might be searching.

Videos and clips include testimonials from former recruits and imams denouncing ISIS’s corruption of Islam, as well as clips from inside ISIS strongholds (which are not so heavenly as ISIS describes). It’s not the be-all, end-all solution, and Google doesn’t claim it is, but it’s a step in the right direction in counteracting the online propaganda of extremist groups.

The Atlantic: Why Are So Many of Today’s Logos Wordless?

Brands are increasingly embracing minimalism, stripping down their logos to the bare essentials. MasterCard, McDonalds, Starbucks, Shell—all have embraced the power of symbol and either demoted or vanquished their names from their logos. Why?

This Atlantic story economically lays out a number of impetuses for the trend, including streamlining design, the effectiveness of symbol over word in a globalized world, and paradoxically, a growing skepticism of global corporations. Ironically, cutting a brand’s name can help a corporation rebrand: a rebrand by debranding.

The dream of every stoner at Virginia Tech is about to come true: Google drones will soon start delivering Chipotle to their school. My initial feeling was a sense of frustration at all the dumb things we use technology for. I kind of share the sentiment of whoever made this meme. 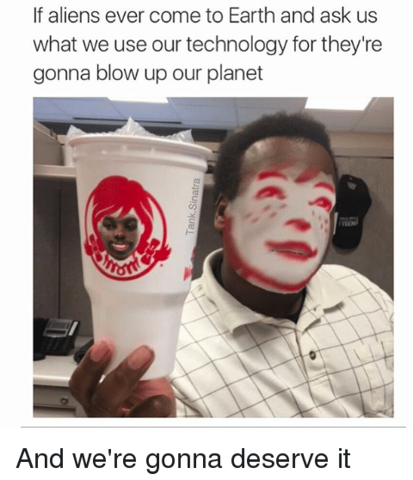 But the fact of the matter is the brands that have money to sponsor this type of thing (Chipotle) and the tech giants with money to spend on experimental projects (Google) often end up driving huge innovations and overcoming regulations. In fact, the article explains that this is the “most significant F.A.A.-approved trials of drone-delivery technology yet conducted in the United States.”

If this goes well, we could see a huge change in how retailers market and deliver goods, which will hopefully mean more drone use for things that will positively impact society.

Today in how not to do communications, we have this all-time bad statement from Facebook HQ: “While we recognize that this photo is iconic, it’s difficult to create a distinction between allowing a photograph of a nude child in one instance and not others.”

While it’s true that, from an algorithm’s perspective, this is indeed difficult, it also undermines Facebook’s longstanding attempt to convince us that algorithms are better than humans at content curation. Anyone with editorial experience—or half a brain, really—could easily identify this seminal photograph by Nick Ut as decidedly not child pornography. Algorithms, on the other hand, are culturally dumb, despite the years of work and millions of dollars that have been poured into Facebook’s censorship system.

It’s a bad look just weeks after Facebook fired its editorial team and put the algorithm (and engineers, apparently) in charge. In combination with today’s other Facebook scandal—that its Trending section promoted a 9/11 conspiracy article—one has to wonder if Facebook is regretting its decision.

Stratechery: Beyond the iPhone

Ben Thompson’s analysis of the recent press around the new iPhone 7 posits that Apple users may be on the precipice of ending the honeymoon phase of our collective relationship with the iconic tech company.

It’s not that anything is wrong with the new iPhone 7—but there isn’t anything really compelling about it, either. Apple CEO Tim Cook seems to be relying on all of the perks that come with being an iPhone user (read: access to exclusive albums on Apple Music, iOS-only Nintendo games) without offering major innovations of the product itself. It’s like having a significant other who is kind of boring, but has a really good record collection.

However, Thompson optimistically asserts that some of these seemingly underwhelming features are likely laying the groundwork for major changes, like virtual-reality cameras and voice-only wireless computing.