Contently Case Story: Inside Athenahealth’s Quest to Launch the Vox of Health Care

Contently Case Stories is a series highlighting some of Contently’s most successful clients.

When President Obama signed the Affordable Care Act (ACA) on March 23, 2010, it became a turning point in American health care. The federal statute established a shared responsibility between the government, employers, and individuals to ensure that Americans would have access to affordable and high-quality health insurance.

Yet for the most part, the health care system in the U.S. is still broken. In 2013, doctors warned there was a lack of transparency and too many dollars were wasted on poor treatment. A year later, the Commonwealth Fund reported that American health care was among the most expensive and worst-performing in the world. Today, patients are still frustrated with wait times and access, and medical professionals struggle to keep pace with digital advancements.

In the face of these systemic obstacles athenahealth is more committed than ever to its ambitious goal: “make health care work as it should.” The fast-growing, publicly traded company provides electronic health records and other cloud-based services to medical groups so that care is better connected and doctors are able to focus more on their patients. Over a period of nearly two decades, they’ve built a vast information network serving 80,000 providers nationwide—all connected via a single platform.

Despite its success, a major challenge for athenahealth was to establish the network as a leader in health care and as a valuable source for health information—not just a piece of software. Because athena manages financial and clinical transactions for tens of thousands of providers, the company sits on a wealth of health-related data. With 90 million patient records, athenahealth is the largest single network of clinical health information in the country.

“We are always trying to explain the network,” said John Fox, executive director of content. “What better way to explain athenahealth than to make the power of the network visible—to manifest stories through data and what we spring from it?”

On June 1, Fox and the athenahealth content team launched an impressive new digital magazine, athenaInsight. With this new focus, the company wants to emerge as a leading resource for real-time health care data and the context for why it matters. Like Vox, athenaInsight’s role is not just to report, but explain why those reports are relevant.

Using Contently’s editorial platform and engagement analytics, athenahealth looks to become more strategic about how to connect the right stories and data with its target audience. “Contently is going to give us the ability to really drill into the numbers,” Fox explained. “While we know our audience quite well, we don’t yet know enough on which topics drive [the most] interest and engagement.”

With Contently, athenahealth’s creative teams now have the tools to optimize their content and prove the ROI of content marketing. “Our team has always been on the hook for creating content that goes out and gets pushed out by other teams who have the analytics,” Fox said. “We are excited to have our own analytics where we can be on the hook and hold ourselves accountable.”

The company hasn’t just scratched the surface of business storytelling—it has poached top journalists to develop a sophisticated newsroom. Here’s a look inside. 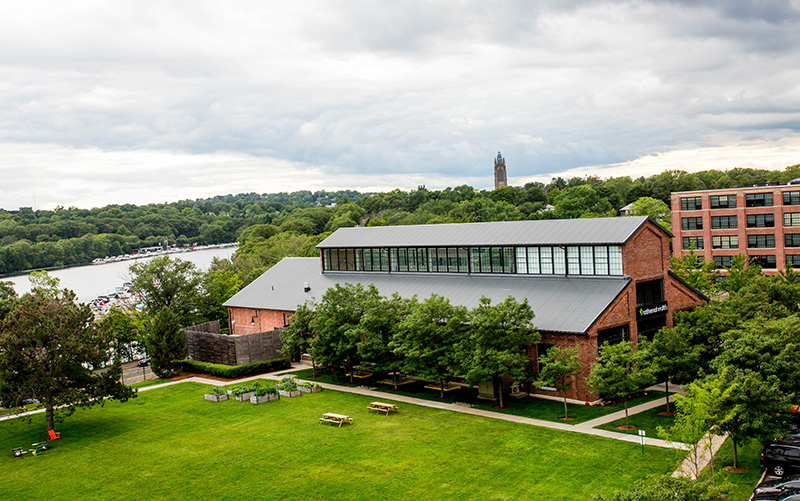 Athenahealth’s Boston campus is the east coast version of Google’s professional playground. Nineteenth-century industrial buildings surround an expansive lawn where, on a sunny day, a healthy portion of athenahealth’s 5,000 employees have lunchtime picnics between frisbee games.

But that isn’t the only place where athenahealth is taking notes from other industries. The editorial team uses the network’s clinical, financial, and behavioral data to tell stories that inspire dialogue and action.

James Furbush, managing editor of athenaInsight, believes the publication can capitalize on a unique opportunity in health care. “There is a lot of green space to have a well-designed publication, to produce great content, and to tap into this data set that we have to provide valuable assets to executives and the health care industry,” he explained.

Showcasing a smart use of data and visual content, athenaInsight is off to a promising start. The story “So far, the ACA expansion is working,” for example, leverages athenahealth’s data and a series of graphs throughout the storyline to give life to the article’s findings that the law has improved health care access for low-income beneficiaries. 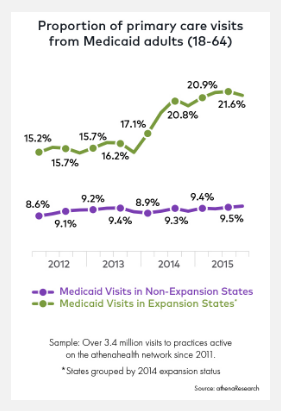 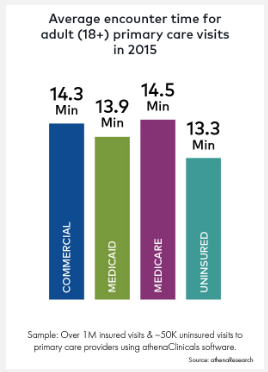 Similarly, “The ninjas of patient pay” puts athenahealth’s network data at the forefront of the story. These stories are just two of many data-first stories featured in the digital magazine.

With data-driven sites like FiveThirtyEight and Vox as models, the company hopes to use athenaInsight to establish itself as a leader in health news and health care policy. The site also provides rich ammunition for athenahealth’s marketing and sales departments, which can point to athenaInsight stories as evidence of the network’s superior data collection and insights.

While athenaInsight is data-driven, the company’s content strategy also relies on something more fundamental: Build a strong editorial team. “We need great storytelling,” said Fox. “That’s pretty much all it is.”

In addition to Fox and Furbush, the athenaInsight staff is made up of three full-time writers, a team of Contently freelance journalists, as well as video producers and information designers. Liz Kellogg, design lead for athenaInsight, works alongside the editorial team to create shareable data visualizations based on network findings.

This is just one of many ways athenaInsight resembles digital journalism outlets like Quartz, Vox, or FiveThirtyEight that have invested heavily in data storytelling.

“I wanted to pluck someone from the journalist world and say, ‘Be a journalist on this network. This is your beat. Your beat is called The athenahealth Network,'” Fox said. “They know what makes a great story, a protagonist, and a hero because they were either trained in school or they learned it by doing.”

Joanna Weiss, the publication’s executive editor, is evidence of this commitment to hiring staff journalists. Weiss started out as a reporter for the Times-Picayune in New Orleans before a 16-year stint at The Boston Globe. Furbush, too, came from a journalism background, covering Silicon Valley.

“It all comes down to the basics of journalism, which is curiosity, the ability to tell a story, general fluency with the language, and being able to interview and write,” said Weiss. “With Contently writers, we look for the same thing. Some of the writers have a background in health care, and that’s been helpful because much of the writing is very technical.”

Whether the stories are technical or discuss high-level policy issues, the key is to find writers who know how to turn data into a story. “If we have this bit of interesting information, but we don’t have the answer for what it means, we need someone to go out and do the discovery—to source and explore to find out people’s reactions to this data,” Weiss said. “You really need a journalism mindset to do that.”

When you enter the athenahealth video studio, the first thing you notice is a large green screen situated next to a set that resembles Good Morning America‘s. Tall windows cast natural light on the set’s guests.

“You know how they do the morning programs with the window [in the backdrop]?” Jacqueline Mow, director of video production at athenahealth, asked. “Our thought was to create a daylight studio like that.” 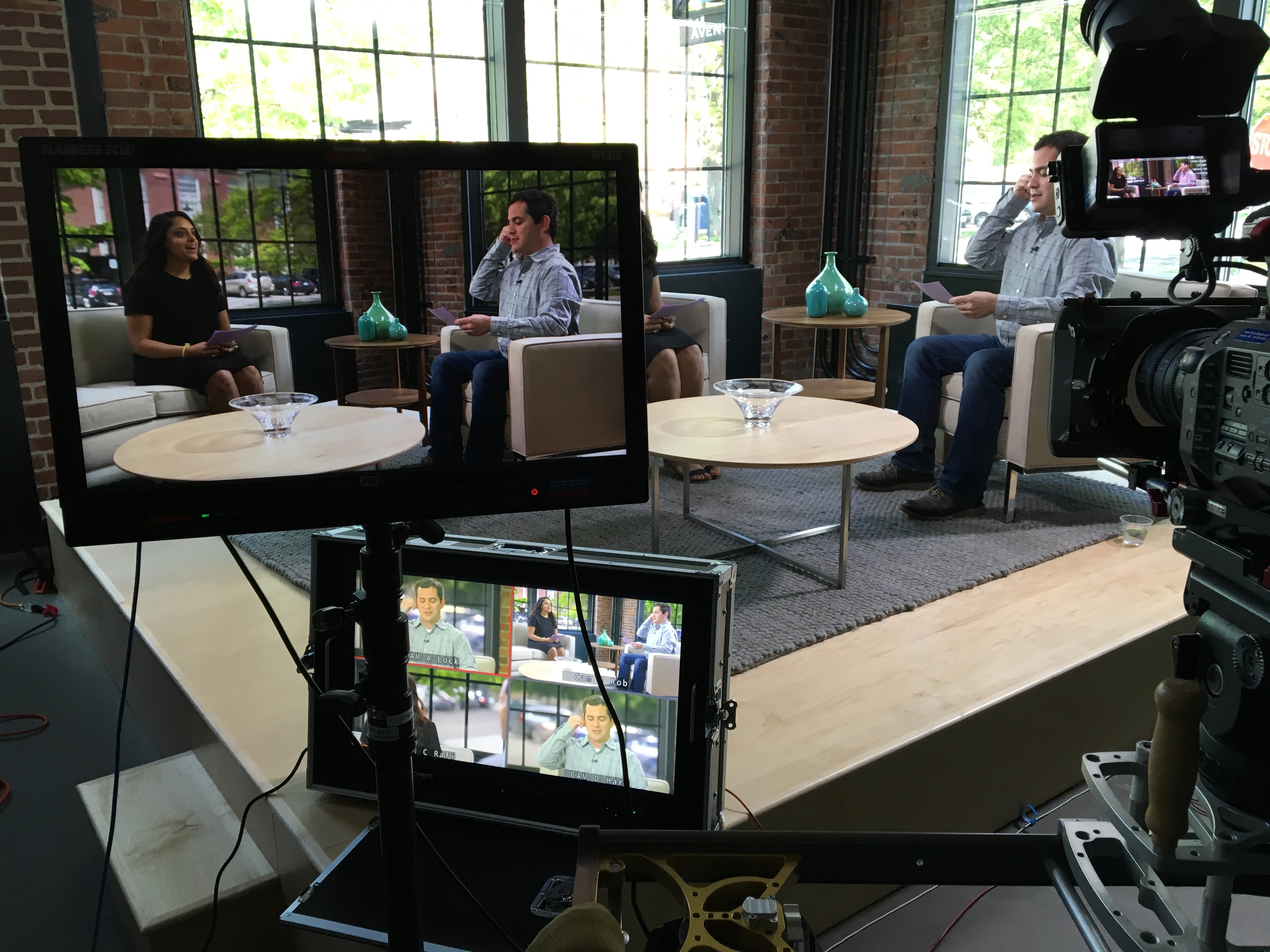 The video studio, managed by Mow and video producer Laura Longsworth, is part of a larger initiative to use creative content to inspire and inform different departments. At athenahealth, this “culture of content”—as we describe in the Contently content methodology—is driven by a content leader who evangelizes its company-wide adoption and encourages creativity and risk-taking.

At the athenahealth headquarters, this leader is Pierre Valette, athena’s vice president of content and communications, who has a background in television production (he won an Emmy for his work at WGBH) and heads both the editorial and video teams. “The transition from public television to corporate isn’t necessarily obvious,” explained Longsworth, who, along with Mow, came from public TV prior to her work at athenahealth. “The fact that we are all here is partly because of Pierre and partly because we have freedom in terms of how we do things creatively.”

Mow and Longsworth’s creative work is so popular inside the company that they had to implement a formal vetting process for video requests. “Once we got here, everyone and their mother wanted a video for something,” Mow laughed.

And while the health care industry gets a bad rap for being stodgy and antiquated, athenahealth has integrated humor into its video strategy. Among its top projects is (real!) doctor ZDoggMD’s parody of Jay Z and Alicia Keys’s “Empire State of Mind,” which ran as part of athenahealth’s #LetDoctorsBeDoctors campaign.

But not all health content is a laughing matter. Athena’s client testimonials reveal the way the company’s EHR technology impacts people during times of hardship. One testimonial brought the team down to a free clinic in Texas, where athenahealth’s services helped keep the medical facility alive. The facility, which offered free medical treatment to low-income residents who fell in the crack between Medicaid and ACA insurance and were not covered under Texas state law, used data from athenahealth to prove its services were saving lives. The clinic maintained its funding as a result.

According to the video team, while the story ran separately from athenaInsight, it was well received because it highlighted health care as a political and personal issue. “Health care is one of the greatest challenges in this country,” Longsworth lamented. “There are a million things we can tackle because it touches everybody.”

A new standard for health care

In the next several months, athenahealth will test the effectiveness of its growing content program. For the editorial team in particular, there is pressure to prove ROI, which is why it will look to Contently Analytics‘ engagement metrics to guide its strategy. These analytics will not only serve as a business tool, but also a mechanism to empower the creative teams to ambitiously report on the health care industry.

Yet perhaps the reason the creative teams at athenahealth are so motivated to produce compelling health news is that their mission extends far beyond the company’s software.

“Working in public-policy journalism, you understand that if you can make health care work better, you free up resources to make everything else better,” Weiss said. “The ability to tell real-time health stories and also tell the stories about how to improve health care—that’s something I want to be a part of.”