While U.K. and U.S. brands may not see eye to eye on the proper use of the term “football,” whether one puts jam or jelly on toast, or the true definition of the word “pants,” companies from both countries can agree on the benefits of content marketing.

According to the Content Marketing Institute, 88 percent of U.K. marketers have plans to produce more content in 2016 than they did in 2015, with 66 percent increasing their budget to do so.

As U.K. brands finally get the global recognition they deserve for their marketing triumphs, here are three companies thriving with sophisticated content programs.

Real Views may be classified as a blog, but to Jones Lang LaSalle (JLL), the London-based commercial real-estate company that produces it, the site has become so much more. “We see it as more of a brand journalism site,” said Madeleine Little, JLL’s director of global marketing.

Real Views is penned by professional journalists rather than company employees, and it boasts as much multimedia content as it does text. Because of this approach, JLL has been able to branch out from typical press releases and research reports to establish credibility.

The site launched in May of 2015, and unlike the company’s other blogs, which tend to focus solely on real estate, it addresses a broader range of topics like avant-garde design and the future of charging stations for electric cars. The content is organized into four sections: Trends, Places, Economy, and Industry. In a broader context, the work boosts awareness of JLL and shows off its creative side.

“One of our main motivators was to reach an audience beyond the traditional real-estate sector,” Little said, “and to demonstrate how vital and important real estate is to the world at large—to firms from a business perspective, but also [to] individuals, whether in their workplace, home, or even in their leisure activities.”

To produce a steady stream of quality content, from blog posts to graphics and videos, JLL employs a global editor in London along with in-house writers, all of whom have worked as journalists. It also partners with content agencies and a network of freelancers, and even taps its marketing and PR teams for the occasional article.

“All content is subject to the same editorial process,” Little noted. “We have very clear guidelines about the kind of topics Real Views discusses and the tone of voice that it uses.”

Stories for the site are inspired by internal and external industry events, along with breaking news. “Keeping content fresh is vital and something we work hard at,” Little said. So is weighing JLL’s marketing agenda against audience demand. “Not surprisingly, stories about luxury hotels are more popular than stories about industrial warehouses. We have to try to maintain a balance.”

When it comes to big-picture marketing strategy, JLL strives to produce informative content across all platforms, from its corporate sites all the way to its pitches and proposals. Among the company’s other projects are The Investor, a five-year-old publication for real estate investors, and microsites for specific service sectors like retail and hotels.

Also on the company’s radar is how consumers interact with its publications. JLL tailors its content to meet the needs of busy, bombarded customers. Little and her team pay particular attention to mobile responsiveness, content length, and the visual appeal of all pieces produced. She favors graphics and video—like the below clip exploring the future of China’s hospitality industry—but demands high-quality multimedia to ensure that customers aren’t “turned off” by the result.

“It’s a strategy that is constantly evolving,” Little said. “And as it does, I think we are seeing more understanding and engagement within our marketing and communications teams globally, from the business, and also from our audiences. This is really encouraging and makes this a very exciting space to work in. There’s always more to do—we can’t ever stand still.”

Barclays, the British bank headquartered in London, has shown a lot of content marketing creativity over the past few years, from Code Playground, a site that teaches children and adults how to code, to Digital Eagles, designed to help consumers navigate digital technology through a series of downloadable how-to guides. Keeping in line with those successes, Barclaycard, Barclay’s global payment subsidiary that introduced the U.K.’s first credit card in 1966, is no stranger to innovation—especially when it comes to content.

In 2013, Barclaycard partnered with parenting site Mumsnet to launch a four-part web series called Shop Talk, meant to “celebrate shopping savvy women.” Barclaycard’s Freedom Rewards credit card sponsored the show, which doled out advice on shopping, product trends, and how to save money both online and in brick-and-mortar stores.

This year, Barclaycard began releasing a new series of videos offering tips on subjects like online shopping, waiting in line, and tipping abroad—all part of a new campaign launched in the spring to highlight the benefits of Barclaycard’s various services. The company deftly employs humor to make its message more memorable by featuring English standup comedian Jason Manford. Each routine ends with a call to action—the chance to download the Barclaycard app, or to sign up for a spend-limit alert.

“It’s not actually business to business, but it’s person to person,” Andrew McNamee, VP of Barclaycard’s digital strategy, wrote in July. “If you treat your entire content strategy like you’re speaking to a business, then you’re probably going about this in the wrong way.”

John Lewis, which started as a London department store in 1864, may be best known in the U.S. for its 2014 #MontyThePenguin ad, but the retailer has long been investing in brand content in the form of print magazines. Between John Lewis Home, John Lewis Cook, and the quarterly fashion title Edition—which boasts a print circulation of close to 500,000 and an editorial director who was formerly with Marie Claire—the retailers’s influence stretches far and wide.

In 2012, Edition surpassed category leader Glamour to become the fashion magazine with the largest circulation in the U.K., and last year, it took the top spot in the women’s lifestyle magazine market again. Its articles include everything from profiles of top fashion makeup artists to interviews with up-and-coming design executives. 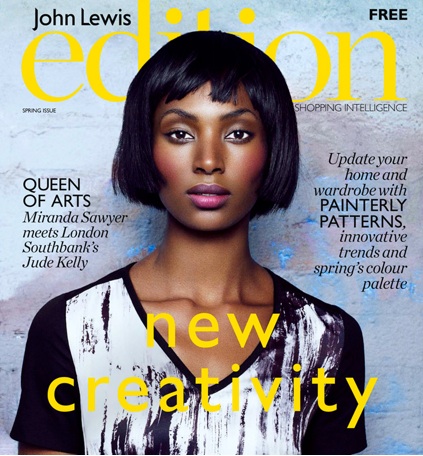 John Brown Media, the content shop behind all three magazines, retains a stable of editors and art directors to oversee them. In addition to in-house talent, the company commissions expert photographers, stylists, and writers to produce the work. CEO Andrew Hirsch estimates that 30 percent of the editorial team is internal while 70 percent consists of leading freelance journalists.

Catering to both print and digital audiences, John Lewis puts a lot of effort into determining how to allocate content marketing budgets. “You really need to understand how customers are absorbing content,” Hirsch said. “Over-fifties in the U.K. are much more into tablets than mobile, so if we’ve got a client targeting women [who are] twenty-five to thirty-five, we’ll put a lot more budget toward tablet or print.”

This approach, along with the publisher’s laser focus on producing quality content, appears to be working. Just a year after debuting, John Lewis Cook Edition had a 100 percent pick-up rate in-store, and sales of products featured in the magazine had risen by up to 118 percent. John Lewis Home, meanwhile, generated a 21 percent increase in interior and homeware product sales against estimates, proving that print isn’t just alive and kicking, but capable of delivering major returns as well.