Understanding the Unusual Relationship Between Social Media and SEO

A few months ago, the CEO of a pet-supply company came to me with a problem. When people typed in the brand, Google auto-corrected the query to the name of a popular TV show. The brand was lost in the vastness of the Internet, and the CEO—let’s call him Mike—was worried that no one would be able to find his company via search.

Since I had experience optimizing websites for search, Mike asked me to help him build stronger SEO. Within weeks, I was able to get Mike’s website to appear as the first result on a Google search for the company name.

To start, I focused on the usual tried-and-true SEO tactics like shortening URLs, fixing meta tags, and checking on the speed of the website. But the key factor for Mike’s company—which some marketers miss—was social media. It turns out that social and SEO have a hazy yet important relationship.

In a video from 2014, Matt Cutts, then the head of Google’s Web Spam team, definitively said that there’s a relationship between search and social. Although Facebook and Twitter posts are treated like webpages, Google doesn’t index every social media post. Yes, even Google has its limits.

A few years ago, Google made a deal with Twitter that allows Google to see every tweet in real time without needing to index all of them for search. According to a study by Stone Temple Consulting, Google indexes less than 4 percent of all tweets. And even though Google’s bots crawl social pages, Cutts explained that the search engine doesn’t factor Facebook likes or Twitter followers into search rankings.

In a recent article for Entrepreneur, writer Larry Alton posited that a strong social media presence does correlate with SEO rankings but admitted that no one really knows how it happens. Google is secretive about its decisions, and there are so many factors affecting search rankings that it’s hard to pinpoint the impact of social.

For this reason, brands pour significant resources into social media, but they usually see the investment as a means for ads and consumer engagement rather than SEO. Recently, however, experts have figured out some loose connections between the two.

Mike’s site wasn’t showing up in Google results, because search engines didn’t know his brand existed. He had no social media profiles that proved the brand was legitimate.

The first thing I told Mike was that we should create some social profiles and regularly share valuable content. Coupled with a more search-friendly website and a Google My Business listing, these profiles would help search engines understand that Mike’s brand was more than just a TV show typo.

When it comes to branded SEO (which focuses on a branded term, like a company name, as opposed to keywords), social media is extremely important since profiles appear at the top of a search engine results page (SERP).

If you Google my name, for instance, my LinkedIn profile appears at the top of the SERP, followed by my website and my embedded Twitter stream. 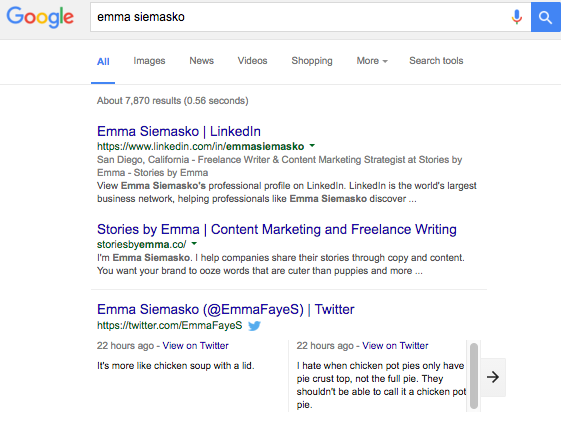 If you don’t keep these profiles active, however, you could miss out on substantial SEO benefits. According to a study from Chitika, an online advertising network, the top position in Google SERPs gets 33 percent of all search traffic.

If you’re looking for the perfect restaurant for a first date, you’ll probably search Google at some point, but you may also check Yelp, peruse TripAdvisor, and scout Facebook posts. Google is dominant, but search is a lot more holistic than we like to think, and plenty of people now use social media as search engines.

Search giants are slowly starting to take advantage of this trend. In 2014, Yelp partnered with Yahoo so reviews would pop up after a search query. Google has Knowledge Graphs that appear on the right side of the first results page when people look up certain people or places, and Google restaurant reviews show up in these graphs. There’s potential here for more embeds from other social networks in the future.

Point is, the content you share on social networks can still affect your SEO and brand recognition through search, albeit indirectly (for now).

Usually, if a brand is on top of its search marketing strategy, it also believes in the virtues of social media. If you’re working to cover both, you’re probably on top of the unusual relationship.

In Mike’s case, social profiles gave his company a chance to compete on Google. Within weeks of posting to social feeds, Google was no longer confusing pet products with a TV show. The digital misunderstanding had turned into a lesson on the importance of SEO.

What Instagram’s IGTV Can Offer Brands