The Mobile Web Sucks. Is Google AMP the Solution?

Weirdly, that’s how Richard Gingras, head of news at Google, ended the product launch video for Google’s Accelerated Mobile Pages (AMP) Project. I’m sure I’m not the only one who immediately thought of a certain presidential candidate when I heard that.

It’s common knowledge that the mobile web sucks. It’s slow, filled with terrible ad formats, and difficult to navigate. As a result of those shortcomings, Facebook has been able to subsume the attention of mobile users by building an app experience that’s faster, free of annoying ads, and overall more of a pleasure to navigate.

For Google, AMP is a chance to compete. It’s an open-source project that allows publishers to easily create mobile-optimized web pages. The pages are stripped down to a clean design—just text, images, and the most basic ad formats.

Major publishers have already started producing AMP versions of all their content. Now, when you Google a news topic, AMP results appear at the top of the page in a carousel-style format that makes it easy to swipe left and right between stories. Twitter and LinkedIn have signed on as parters to the project, which should make social browsing smoother as well; in fact, Twitter Moments now link directly to AMPs. 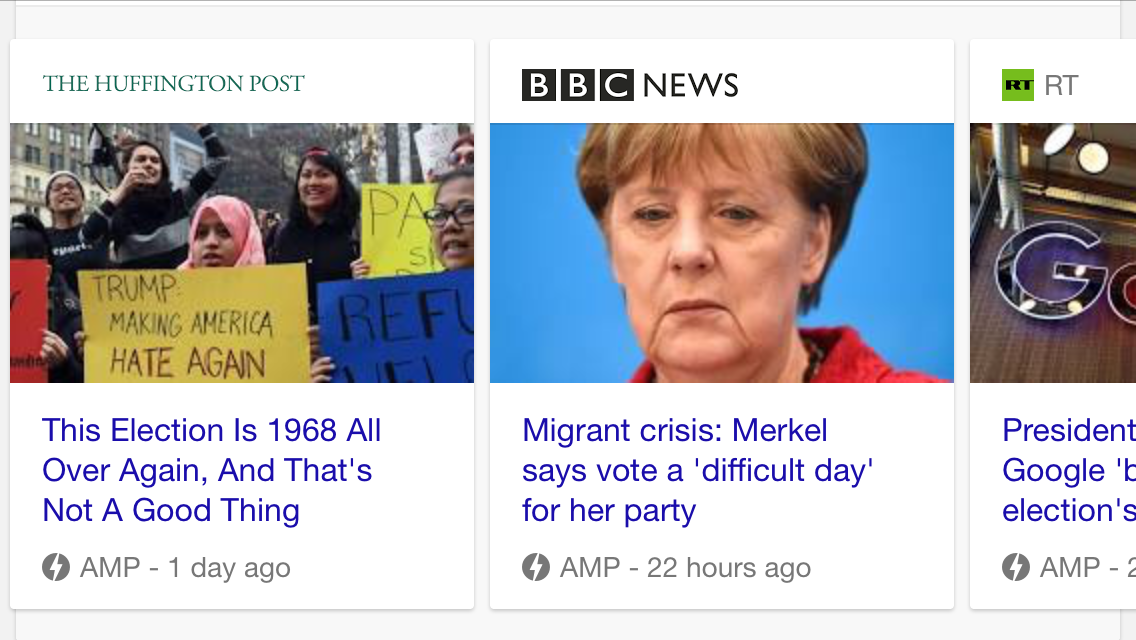 However, unlike Facebook Instant Articles, which similarly promises speed and better UX, Google isn’t offering a revenue-sharing option just yet. On Facebook, publishers can choose to have Facebook sell their ads and still receive 70 percent of the profit. Google, on the other hand, is promoting its project as an industry-wide effort that benefits everyone.

While that may be true, it’s hard not to see Google AMP as an attempt to keep users on mobile browsers rather than Facebook. It may be too late anyway. As Google repeatedly points out in the announcement video, everyone already hates the mobile web. That was largely a consequence of an out-of-control adtech industry and publishers that put easy profit over long-term viability. Once that became the norm, Google ended up in an awkward position: It is the de facto gatekeeper of the open mobile web, but it has long been careful to keep the “open” part of the equation alive.

This feature undoubtedly represents a move away from that openness. Though Google claims AMPs won’t receive special treatment from the algorithms, their speed and featured placement in search results will nevertheless make them highly preferable to any page that’s not an AMP. The result is a hierarchy—web pages that use AMP at the top, and web pages that don’t below.

Like with Facebook Instant Articles and Facebook’s native video player, the speed will eventually push out every other kind of format. For publishers, brands, and even e-commerce sites, it’s now AMP or bust.