While that may sound like the synopsis of an upcoming science fiction movie, it’s actually one of the playful promises from NASA’s new content campaign, “Visions of the Future.” With a series of 14 glossy, futuristic travel posters, NASA invites you to book your trips to cosmic tourist destinations like Ceres, “queen of the asteroid belt,” and Venus, “voted best place in the solar system to watch the Mercury transit.”

Compared to other government agencies, NASA’s marketers don’t have it so hard, right? It’s easy to make space exploration look cool. Still, more mundane or enigmatic organizations like the TSA and CIA are also getting into the content game, trying to open our eyes to what really goes on behind closed doors. And if some of our country’s most secretive agencies can pull back the curtain with content, brands have little excuse not to do the same.

Let’s take a look inside three government agencies and to how they’re turning bureaucracy into content you’ll actually enjoy.

From an early age, we’re taught about the planets in our solar system. But how much do we know about the exoplanets outside of this system? Like Kepler-16b, for instance, which has two suns, or Enceladus, which shows strong evidence of having an ocean?

“I was blown away that these exoplanets are real,” said David Delgado, visual strategist at The Studio at NASA’s Jet Propulsion Laboratory (JPL). “They are far away and hard to get to, but they are there—millions of other worlds out there. We naturally wondered what it would be like to go to the places.”

Although the topic is interesting, publishing a blog post on exoplanets probably wouldn’t be impactful enough to get people’s attention. NASA needed something more dynamic and shareable. That’s why the seven team members of The Studio at JPL got together to create a series of Art Deco-inspired posters that act as futuristic ads for these otherworldly tourist spots. 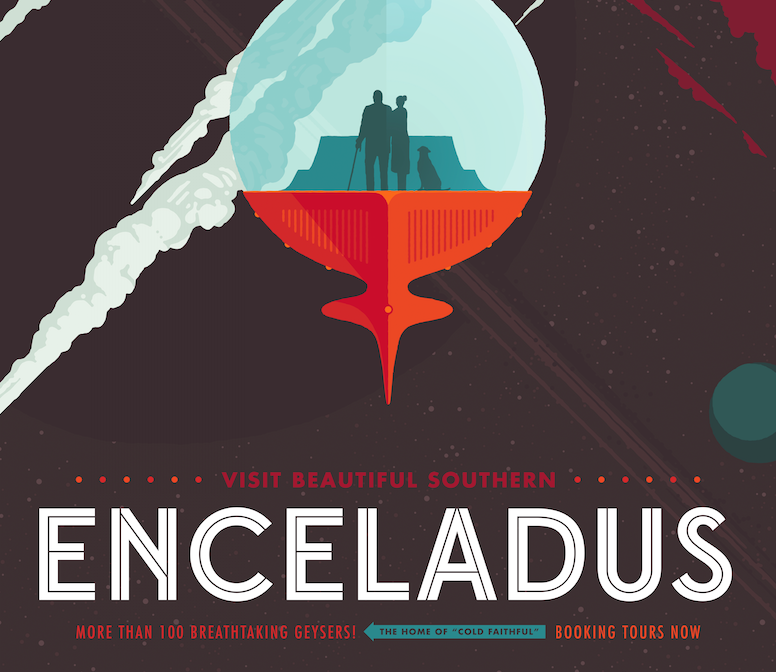 “We had several conversations with scientists early on asking them about their personal favorite or fascinating details about the moon or planet that they focused their work on,” said Joby Harris, another visual strategist who worked on the project. “We then turned our full attention on creating visually beautiful art that warranted a place on someone’s wall, taking some dramatic liberties.”

The Studio began by creating five exoplanet posters over the course of a year, perfecting each piece according to ongoing feedback from the scientists. Then the creative team worked on nine more posters in just five months for the “Visions of the Future” release. Due to the time crunch, the team brought on three outside contractors to help.

“A list of destinations were selected based upon places NASA might study over the next decade,” added visual strategist Dan Goods. “We tried to find one aspect of each location that is special to tell a story that would give people a visceral sense of being there.”

For instance, PSO J318.5-22 was only just discovered in 2013. It’s hard to spot because it’s a rogue planet, meaning it doesn’t orbit a star and, therefore, doesn’t have any light. Turning that into a selling point for tourists, The Studio illustrated a couple at a fancy event, with the tagline: “Where the nightlife never ends.” 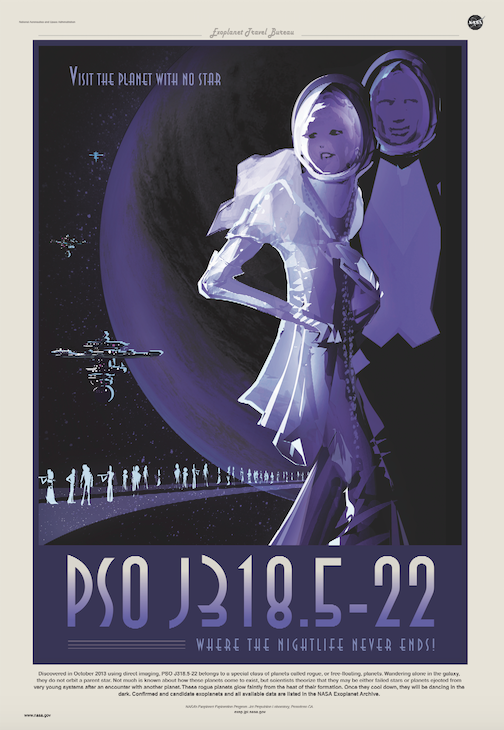 To learn more facts about fascinating planets, viewers can click on each poster and read a caption explaining how NASA is exploring the featured destination. The audience is also encouraged to download and print the posters to hang them on the wall—you know, right next to your Star Wars poster.

“The reaction to the posters has exceeded our expectations,” Harris said. “We are learning that these images are imagination igniters that spark a lot of curiosity, questions, and fascination for what lies beyond the edge of possibility.”

CIA: Inside the real-life X-Files

This January, the cult sci-fi show The X-Files returned to TV for the first time in almost 14 years, setting fictitious FBI agents Fox Mulder and Dana Scully back on their quest to investigate the paranormal. In anticipation of the reboot, a flurry of listicles hit the Internet. BuzzFeed published “23 ‘X-Files’ Gifts That Are Out Of This World” and the Guardian posted “12 episodes to get you ready for Mulder and Scully’s new series.” But perhaps no organization was better equipped to contribute to this hype than the CIA.

Joining in the fun, the CIA took to its blog to curate two lists of legitimate declassified X-files from its UFO collection (which is a thing). One list includes files that appeal to Agent Mulder, who was convinced extraterrestrials existed. If you want to believe, check out one man’s account of seeing a flying saucer over East Germany. The other list is for the skeptics, like Agent Scully, who was always determined to find a scientific explanation for UFO sightings. For example, this memorandum provides concrete reasons why a flying saucer couldn’t have been spotted over the U.S.

To accompany these lists, the CIA also published a feature story, “How to Investigate a Flying Saucer,” which starts off like a Stephen King novel:

Southbound on a lone desert highway, police officer Lonnie Zamora was in pursuit of a speeding car outside the town of Socorro, New Mexico, when he was startled by a loud roar! Seconds later, he saw a large flame rise from the ground and pierce the sky above a remote patch of desert southwest of the highway.

It goes on to describe Zamora’s claimed UFO sighting as well as the history of Project Blue Book, the name for the U.S. Air Force study of UFOs. The article then examines ten ways Project Blue Book investigated these UFOs, with tips for how you can run your own investigation. 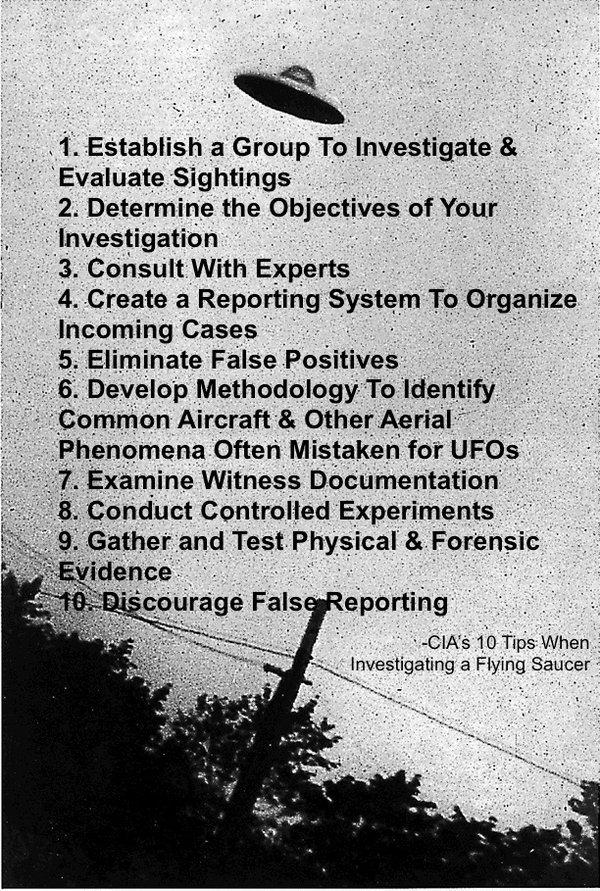 In an effort to drive traffic to the post, the CIA created the shareable visual above and published it on Twitter, garnering over 2,000 retweets and likes. Who knew the CIA had a sense of humor?

TSA: Cakes on a plane

Anyone who’s ever traveled by place has cursed the Transportation Security Administration (TSA) at some point. Despite its commitment to keeping us safe in the air, the agency often takes the blame for long lines at the airport, missed flights, and invasive security checks. But you know what helps ease some of these frustrations? Seeing that those long lines aren’t for nothing, and that the agency does a lot of work to stop people from bringing crazy things on flights.

The TSA shares some of its most interesting finds on Instagram with the hashtag #TSAGoodCatch. Recent highlights include neon green machetes with fake blood, marijuana stashed in a jar of peanut butter, and knives hidden in the sole of a shoe. Each week, the TSA posts a “Week in Review” roundup on its official blog. These posts include charts of the number of firearms discovered in carry-on bags, along with information on how to properly travel with your firearms. 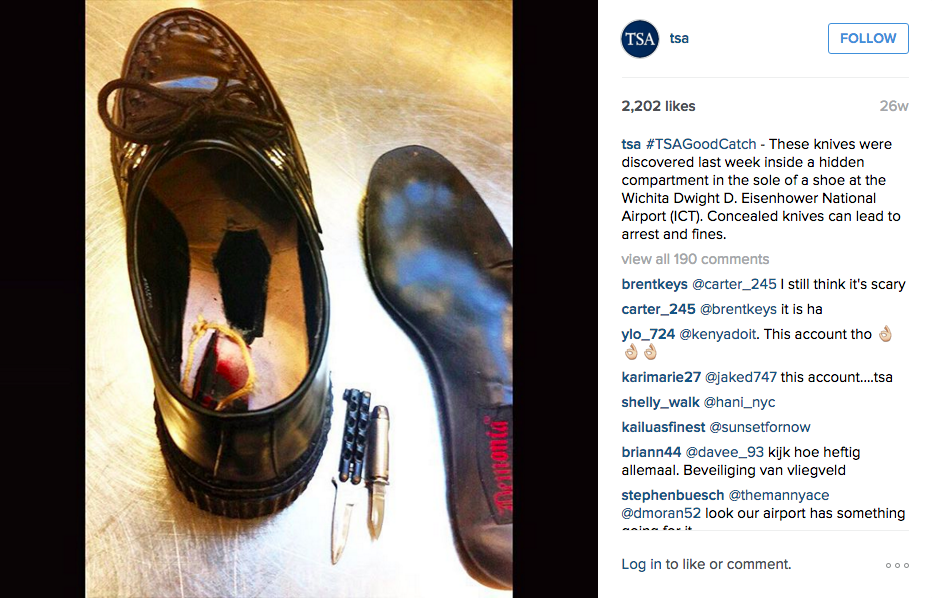 With over 400,000 followers, the TSA Instagram also shares #TSATravelTips, like how to bring a whole pie on a plane, and #TSAOnTheJob, a behind-the-scenes look at how those adorable security dogs do their jobs. 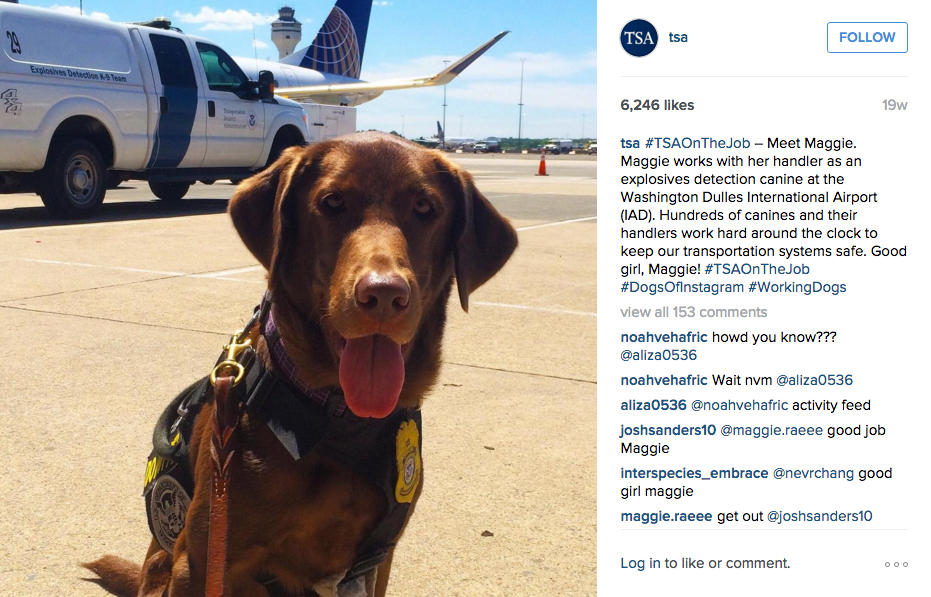 Over on Twitter, the agency recently supplemented its official TSA account with a separate @AskTSA handle, used solely to answer questions from travelers. A small team of TSA professionals from various agencies are on hand to address queries every weekday from 8 a.m. to 10 p.m. and weekends from 9 a.m. to 7 p.m.

One traveler was on her way to the airport when she realized she forgot her passport, so she needed to know if she could get on the plane without it, and she needed an answer quickly. The passenger tweeted @AskTSA and received a response in just 10 minutes. The TSA later wrote an exhaustive blog post based on this question to keep other travelers informed about what identification they need to fly. 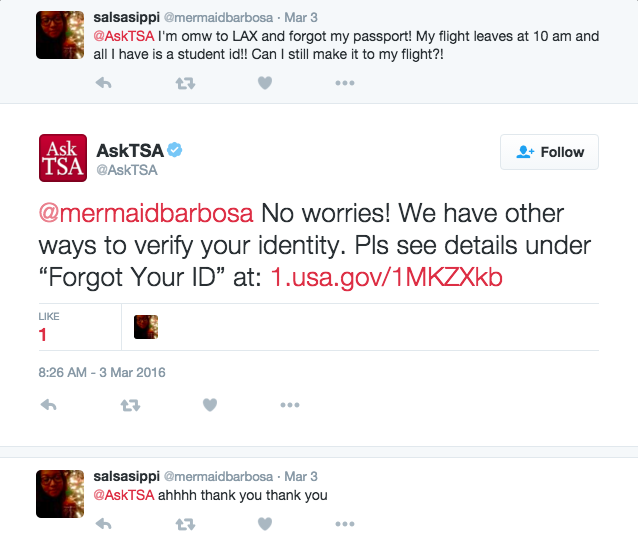 As USA Today reported, another traveler, Yevgeniy Pusin, was so impressed by his communication with @AskTSA—he wanted to know how PreCheck security worked—that he posted an endorsement about the agency on his Facebook.

“I just had the most amazing experience and needed to share it with the world,” Pusin wrote. “A government entity responded to a tweet. Did research. Worked with an airline. Solved a problem … and notified me about the change with a pleasant message. All this in under three hours, and using Twitter. The future is here.”

By letting viewers in on its work and reaching out to customers directly, the TSA has been able humanize its brand and generate positive affiliation among its audience.

Brands can learn a lot from these agencies, especially if they’re worried that they’re too boring or have too much red tape to cut through. The solution is to hone in on the most unique aspect of your brand and find creative ways to share it with your consumers.

Government agencies are producing some of the most impressive content out there—from glossy sci-fi posters to BuzzFeed-style listicles. Their work proves that strong storytelling and high-quality visuals can change the way people perceive even the most impenetrable organizations. The next time you’re stuck in line at the airport, remember that.