How Zoolander Started a New Model for Instagram Marketing

Two months ago, Instagram users following the actor Ben Stiller were in for a surprise. Stiller’s feed was filled with one of those composite images—sometimes called tiling—where one photo is split into multiple posts. In this case, it was a series of grey, furry images that, altogether, depicted Derek Zoolander holding a Siberian husky. 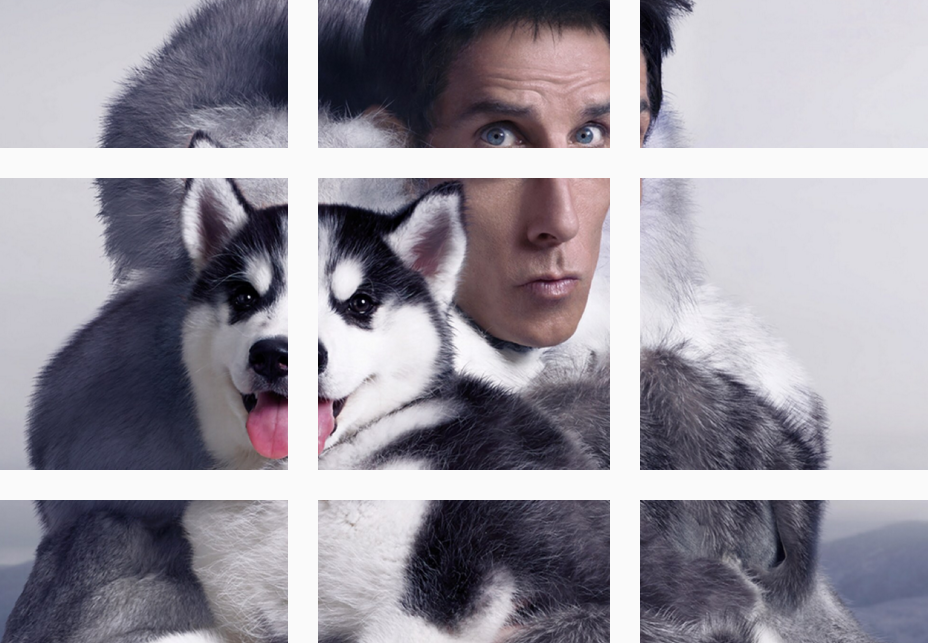 In the days after, Stiller fans, accustomed to artsy shots of New York autumn days, were inundated with Zoolander’s signature Blue Steel pose and captions such as: “Ornaments are actually tiny mirrors if you look close enough..#ornamentselfie” and “2 things I love: a hearty breakfast, and my first @Voguemagazine cover with Pineapple Cruz!! ((link in bio)) #cheatday.” The latter caption accompanied a photo of six pomegranate seeds and a green juice.

As the Zoolander 2 release date of February 12 has gotten closer, the movie’s marketing push has been on full display online—with an interesting wrinkle. Instead of a standard press junket, Stiller has been promoting the movie in character.

This month, he appeared as Zoolander on the cover of Vogue, dressed in his character’s flamboyant style while recreating iconic fashion photos from history. The magazine has portrayed actors dressed as their characters before, like Carey Mulligan for The Great Gatsby and Kirsten Dunst for Marie Antoinette, but four days after the cover reveal, Vogue took the collaboration to the next level by making Zoolander the first fictional personality to participate in the publication’s popular “73 Questions” video series.

Part apartment tour and part interview, “73 Questions” confronts celebrities with hard-hitting queries such as “What’s your favorite spirit animal?” and “Cake or pie?” while they walk through their homes. Zoolander’s version included a view of his “winter house,” complete with Blue Steel portraits and models on stationary bikes.

With help from the world’s biggest fashion magazine, Ben Stiller has used the industry that his films satirize to his advantage. On Instagram, Vogue‘s glossy images and videos were mostly a convenient launch pad for Zoolander’s social media marketing.

Forget #BlueSteel, remember #voguestagram? Our February cover with @zoolander and @penelopecruzoficial is on stands now.

Scrolling through Zoolander’s feed is a star-studded experience, with photos and videos featuring Justin Bieber, Katy Perry, and model Cara Delevingne. And those celebrities are happy to reciprocate for more exposure: Katy Perry posted a video for her 39 million followers, and Delevingne spread the word of her walk-off with Derek to her 26 million fans. Zoolander himself is nearly up to a million.

Recently, the self-described “#1 MALE MODEL IN THE WORLD” posted a photo of himself holding a neon yellow beanie labelled with “DonAtari” in graffiti letters and a caption that read: “Follow @donatari_69.” The handle belongs to a fake fashion designer (played in the movie by Kyle Mooney), who exhibits typical vapid behavior on the platform, accompanied by captions riddled with spelling mistakes and emojis. He goes to lunch with Man Repeller’s Leandra Medine and Instagram’s head of fashion partnerships, Eva Chen.

The characters’ Instagram accounts are almost indistinguishable from those of your average celebrities. The images are self-involved and squad-conscious, a low-res look at a life in the spotlight. Who better to update the way movies are marketed on Instagram than a character like Zoolander?

As Vogue contributing editor André Leon Talley put it in a recent podcast with Stiller, Zoolander is “the absolute innovator of the selfie duck face.” Zoolander came out in 2001, before there were camera phones, so Derek’s pout was a prescient choice. “Just another reason we had to make the sequel,” Stiller told Talley, “Because Derek taking a selfie had to be part of the movie somewhere.”

In a larger sense, Stiller wanted to make a sequel fifteen years later so his characters could play with the gadgets of today. “[Technology has] changed how young people take things in and what they experience, and really globally, the way images spread all over the world,” he added. “For Derek … to enter that world would be an interesting thing, to see how [he] would react to it.”

Until now, movie marketing on Instagram has mostly been limited to promotional imagery, clips, and fan regrams, a common strategy of repurposing old materials. As a consequence, the typical branded images blend together like the dull ads that play before movie trailers.

By leveraging their main character’s quirks and the realities of his fashion world, Zoolander 2′s marketing team has managed to use Instagram in an organic way while still giving followers daily reminders of the upcoming film. Timely memes and cross-posts with celebrities make for easy audience growth; followers are compelled to comment, inviting their friends to take part in the Zoolander revival.

Such an immersive marketing plan is aided by the fact that Ben Stiller wrote, directed, and produced Zoolander 2. He’s deeply invested in its success, so he’ll do Blue Steel all day for Instagram. But what if a social media strategy like this were built into a film’s production? Michael B. Jordan, who played Adonis Johnson in Creed, could have posted inspirational boxing quotes and training videos. Jamie Dornan, who won the part of Christian Grey in Fifty Shades of Grey, might have populated an account with skyscraper views and leather surfaces.

Derek Zoolander may be the most superficial guy in fashion, but from a marketing perspective, his approach to social media marketing is full of substance. Rather than just plastering feeds with digital movie posters, savvy marketing teams have the opportunity to do the same, encouraging their stars to blur the line between fact and fiction.