‘Werner Herzog Talks Virtual Reality,’ and 6 Other Stories You Should Read This Week

Engadget: You say advertising, I say block that malware

Forbes makes readers turn off their adblocker to visit the site, offering an “ad-light experience.” I tested it and saw eight ads. (Not too light, in my opinion.) 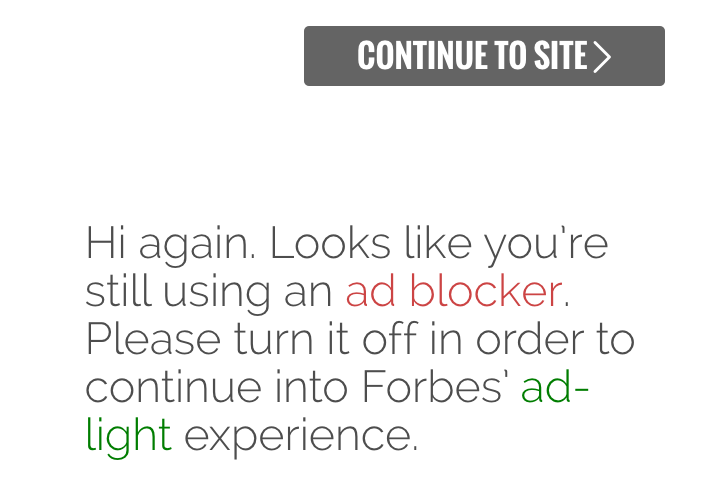 For the big Forbes “30 Under 30” list, people turned off their adblockers and promptly were served malware. The irony was lost on no one. Forbes published an article about the controversy, but I can’t read it because of my adblocker. (Can you tell how frustrated I am with digital advertising?)

I’m a big fan of Werner Herzog, who—besides directing some of the best movies I’ve ever seen (Grizzly Man; Aguirre, the Wrath of God; Encounters at the End of the World)—is also responsible for my favorite YouTube video of all time.

Herzog brings his unabashedly idiosyncratic worldview to this interview about virtual reality, and his answers don’t disappoint. My favorite moment is when he commends the interviewer for an observation in one of his questions and tells him to write it down. Classic.

If you work in media, this article is a must-read. Traffic growth is slowing and stalling across the board; it feels weird to live in a world where BuzzFeed’s traffic hasn’t grown for over a year. That has big implications for all the VC money that’s been pumped into new media ventures, with the assumption that they’d find a way to monetize down the line.

While native has had some promising returns, it’s likely not what Silicon Alley and Valley expected. That all goes to say: Get ready for some upheaval.

Fast Company: Why Gatorade Wants to Go Beyond the Drink to Make Athletes Better

I’ve been a tennis player my whole life, and I briefly entertained the youthful delusion of going pro. During my heyday, I acted as if I were on tour—dressing like Sharapova in the freshest Nike threads and gulping down Gatorade like Serena during my matches.

Gatorade, like Nike and Under Armour, is realizing just how loyal their customers are as the company creates products to fuel athletes 24/7. In this article, Jeff Beer interviews Gatorade SVP Brett O’Brien, who discusses the company’s position as the premier food and beverage brand for athletes, and how that brand is trying to grow through new innovations like smart bottle caps and Prime Chews.

Ultimately a brand’s core goal should be to produce what’s best for their consumers. With Fuelband, Nike learned the hard way that moving into a new market is no easy feat. Conversely, Gatorade has astutely been creating products that fall under its umbrella of expertise instead of going all-in on the trend du jour: wearables.

I love Gatorade, but do I love them enough to buy a Gatorade band. However, I’ll most certainly buy a smart bottle cap to stay hydrated while I pretend I’m playing tennis at Wimbledon.

I’m not so much reading this as watching it. In memory of Alan Rickman (God rest his soul), I spent seven minutes watching cinema’s greatest withholder of approval make tea (and flip tables) in slow motion.

I could link this to content marketing somehow, but it would probably be better to simply say that the part at 3:57 is so good.

Is it better to fracture your ethics to get a tremendous scoop or not get the story at all?

When Rolling Stone gave Sean Penn a journalism hall pass in exchange for an exclusive sit-down with drug lord El Chapo, it chose the former. The magazine got slammed this week for giving El Chapo editorial control over the final draft (even though he allegedly didn’t ask for any changes).

In this straightforward overview, Ravi Somalia talks to Rolling Stone publisher Jann Wenner and uncovers how this journalism scandal unplayed, down to the details of how lawyers were involved in the editing process. For media geeks, it’s a really interesting insider’s look at a publication that wants to rationalize a highly questionable decision. But then again, if I were in Wenner’s shoes, I probably would’ve done the same thing.

As I’m currently experiencing a hip hop revival (if you haven’t listened to Kendrick’s “Mortal Man,” an interview of Tupac’s ghost, it’s seriously time), this article on hip hop’s online culture spoke to me, and in a language I understand: social media.

Laur M. Jackson gives a rundown of the “I” in hip hop, or what it means to be a musical artist while doctoring a social media persona that is, paradoxically, relevant because of its authenticity and simultaneous inaccessibility. Whether or not “Hotline Bling” is your thing, it’s a clever look at the person behind the music and the Instagram. While we may know the Real Slim Shady, will we ever be able to identify the real Champagne Papi?

Why Data Storytelling Is Essential for the Modern PR Strategy